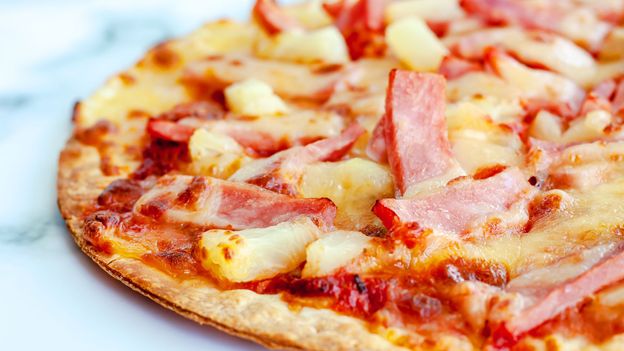 A pizza topping that divides the world

In the 1960s, a chef in Canada created a pizza topping that swept the world. So why is it so widely loved – and hated?

It's not Hawaii you should thank – or indeed blame, depending on your viewpoint.

The man popularly credited with giving the world the ham and pineapple pizza was neither Hawaiian, nor in fact Italian. Sam Panopoulos was a Greek immigrant to Canada who ran a restaurant with his brothers in the city of Chatham, Ontario. Panopoulos had recently visited Naples – the birthplace of pizza – and was inspired to start adding the Italian staple to the restaurant's usual line-up of burgers and pancakes. But what to put on it?

Panopoulos pushed past the then-standard toppings such as mushroom and pepperoni and turned to south-of-the-border inspiration – in this case, the sweet-and-sour flavours which characterised America's take on Chinese food. On top of a cheese-and-tomato-sauce pizza base, he spread canned pineapple and sliced ham, perhaps influenced by the sweet-and-salty taste of Chinese dishes pairing pork and pineapple.

Depending on which side of the divide you stand, a classic dish, or a culinary crime, was born.

Few foods divide as dramatically as ham and pineapple pizza. In many parts of the US, UK and Australasia, few pizza menus seem complete without it. In Italy, however, the pairing is widely considered an abomination. It has even led to international disputes between world leaders and diplomatic interventions. Why is it so divisive?

"I guess you might call it a fusion food, before the term became popular. And, of course, sweet is the most-liked taste, so it is an easy win in that sense," says Charles Spence, an experimental psychologist who studies how our different senses affect our experience of food at the University of Oxford.

Panopoulos' pairing of processed ham and pineapple coincided with the release of the Tropical Recipe Book by Australian food processing company Golden Circle. They were – surprise, surprise – a major producer of canned pineapple, and the book's cover shows pineapple rings gracing a cooked ham. A decade before, a TV cook introduced post-war Germany to a treat called Toast Hawaii, consisting of a pineapple ring, cooked ham and sliced cheese, all cooked under the grill. This may have in fact been a German reworking of the Grilled Spamwich, a spam-and-pineapple recipe which had come over with US soldiers stationed in West Germany after World War Two. All combined the characteristic sweetness of pineapple with the salty, umami foil of processed pork.

Pork and pineapple is, of course, not the only fruit and meat pairing in world cuisine. In France, duck is paired with a sweet orange sauce. Iranian pilaf mixes lamb with pomegranate. American Thanksgiving dinners would not be the same without cranberry sauce accompanying the traditional turkey, or the marshmallows and yams. 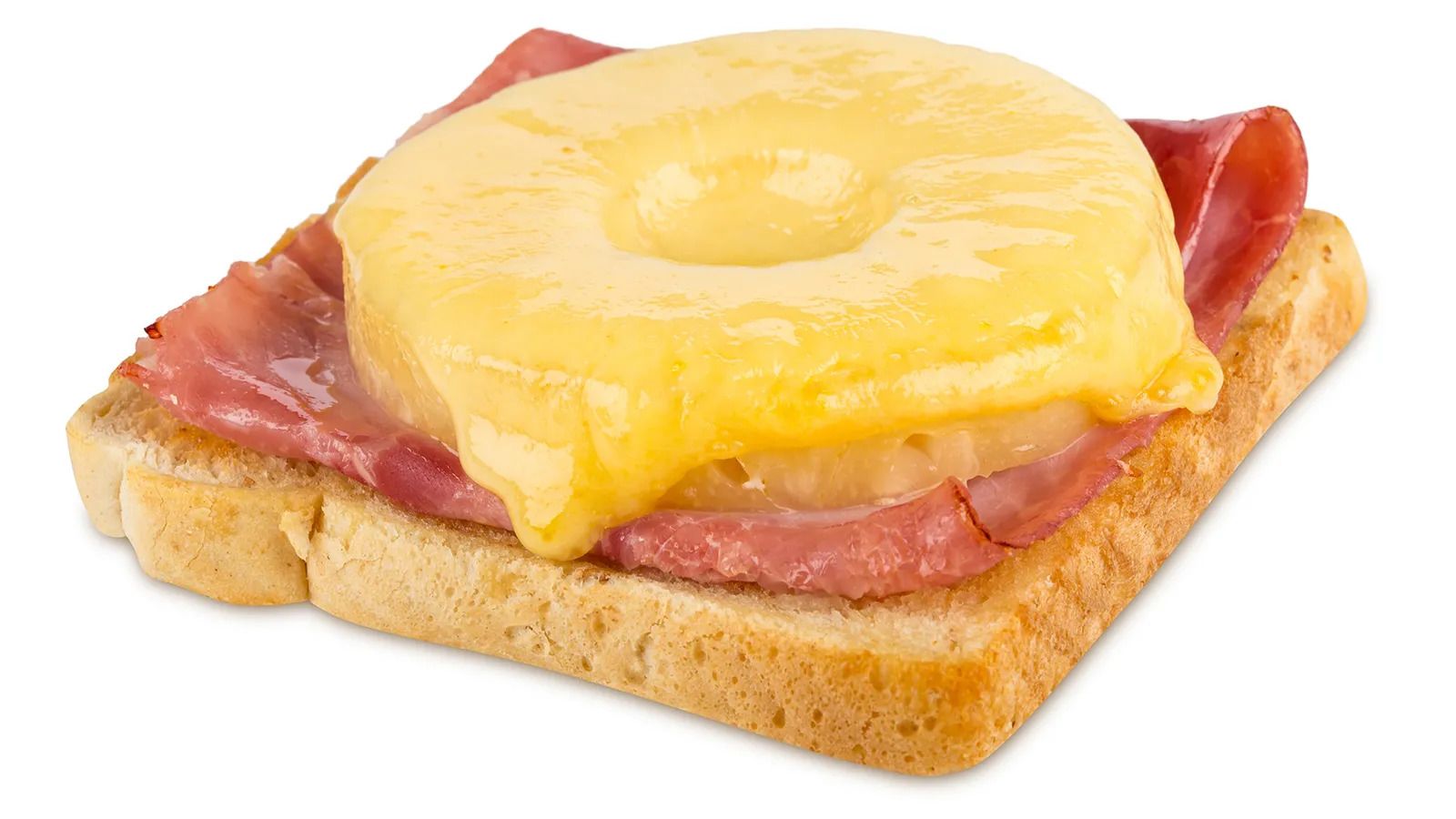 The German recipe for Toast Hawaii – melted cheese, ham and pineapple – could be considered a precursor to the Hawaiian pizza

So why would that work? As the recent explosion in salted-caramel treats has shown us, salty and sweet flavours intrinsically work together. It creates something known as "flavour-layering". This layering causes the brain to react with positive signals, sensing the combination of sweetness – and its carbohydrate fuel – and salt, which is vital for bodily functions.

And pineapple certainly packs a punch in the sweetness department. About 12-15% of a pineapple's weight comes from sugar – mainly sucrose, but also glucose and fructose. Yet pineapples are also fairly acidic, with a pH of between 3-4, depending on the variety (for context, lemon juice has a pH of between 2-3.) Much like that in a can of cola – which is also surprisingly acidic at pH 2-3 – the sugar offsets the tartness and makes it palatable, even enjoyable.

Some people, however, are more sensitive to certain tastes than others. Genetic factors are thought to play a role in how much we each enjoy sour tastes, and scientists have found that people who carry variants of a specific gene called TAS2R38 can be more or less sensitive to bitter compounds. Similarly, our liking for sweet tastes is also influenced by our genes and can affect how much sugary food we eat. It is likely, perhaps, that whether someone likes pineapple on their pizza or not, comes down to their genes.

This makes even more sense when you consider what happens when pineapple is cooked.

"There are many chemical reactions when pineapple is being heated, as it contains a lot of sugars and organic acids," says Zhimin Xu, a food scientist who studies the volatile chemicals that contribute to flavour at Louisiana State University Agricultural Center in Baton Rouge, US. He and his colleagues have studied exactly what happens to pineapple when it is cooked at different temperatures. 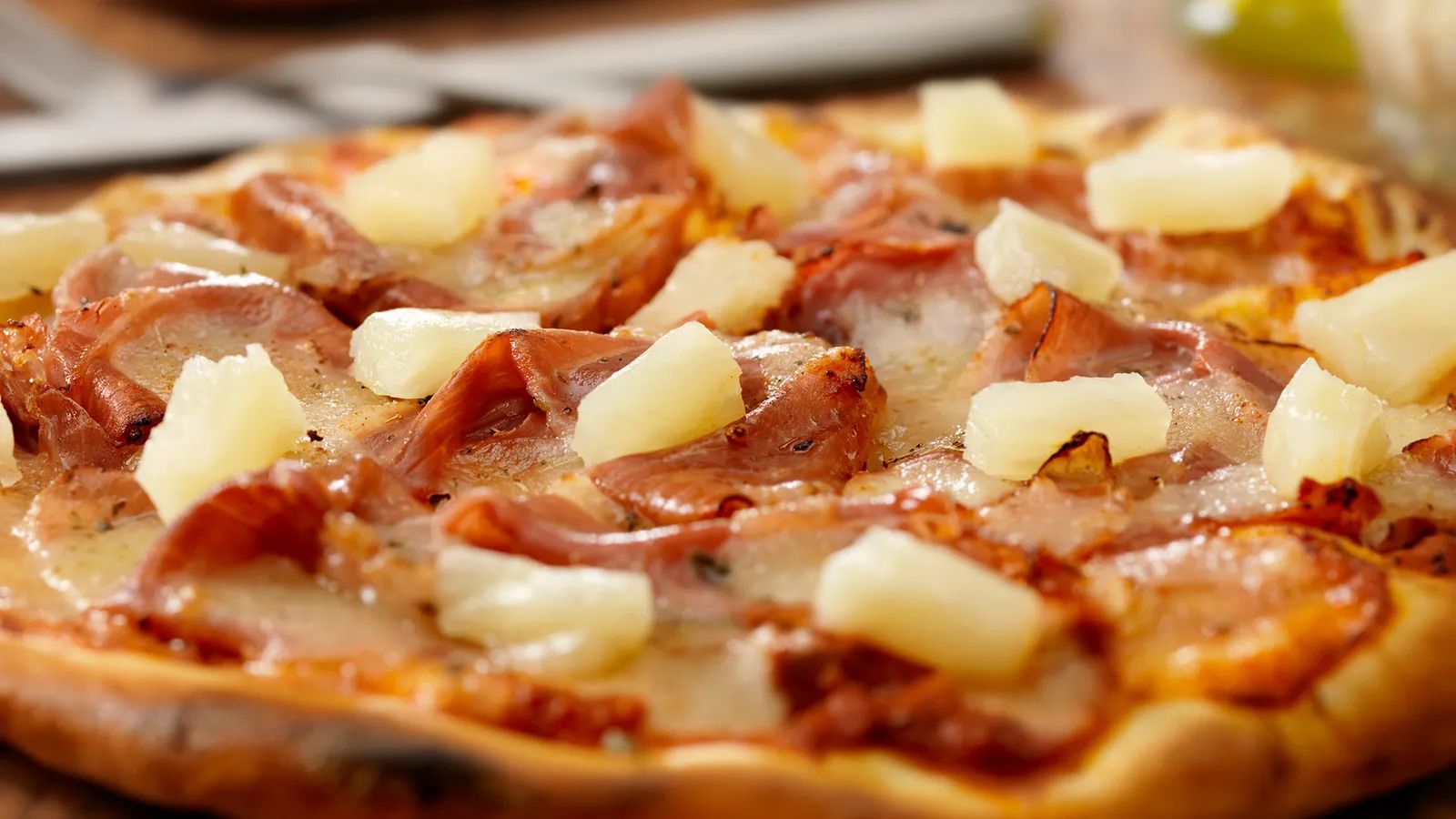 "At mild heating temperature, its fruity aroma is quickly released, but its intensity gets lower and lower with increases of heating temperature and time, while the bread-like aroma increases during heating," he says. "Heated pineapple also has less sweet-and-sour taste compared with fresh-cut pineapple."

But it's when pineapple is heated at high temperatures that things start to get interesting. Most frozen and shop-bought pizzas cooked in domestic ovens at home spend 10-20 minutes in temperatures of 200C-220C (392F-428F), but in a woodfired pizza oven, temperatures can reach more than 500C (932F) and the pizza needs less than a couple of minutes.

Xu and his colleagues found that at temperatures between 200C-225C (392F-437F), the balance of volatile compounds – those that easily become vapour at room temperature and so often contribute to odours and flavours in food – started to change dramatically.

It could be that some people may not like the sweet taste of pineapple when it goes with salty pizza ingredients such as ham, sausage, cheeses - Zhimin Xu

First, the amount of a compound called ethyl acetate, which gives pineapple a fruity smell, decreased considerably at higher temperatures. Meanwhile the levels of a compound called furfural, which imparts an almond and bready flavour, increased dramatically. While some many find this appealing, the bitter taste of almonds is one that regularly polarises opinion.

At the highest temperature tested, however, the sweet, caramel compound 5-methyl furfural became the second most dominant after furfural, helping to enhance a sweet aroma over the fruity one of fresh pineapple. Xu suspects this sweetening of the fruit as it cooks may lie at the heart of why so many people feel strongly about its presence on pizza.

"It could be that some people may not like the sweet taste of pineapple when it goes with salty pizza ingredients such as ham, sausage, cheeses," he says. "However, some people may like the sweet-and-sour taste to balance the salty taste of pizzas. Some pizza ingredients, especially in frozen pizza, are much saltier than before, so topping with some sweet stuff can neutralise the salty taste. Maybe, it opened the door for pineapple to become a popular pizza topping."

But his research also throws up another intriguing finding. Among the other compounds to increase in the pineapple as it is heated were two called 2-methylbutanal and 3-methylbutanal, which impart a distinctive nutty flavour. These are also both found in a key ingredient used in pizza – the cheese. They are most common in hard cheeses such as cheddar, but can also be found in mozzarella. 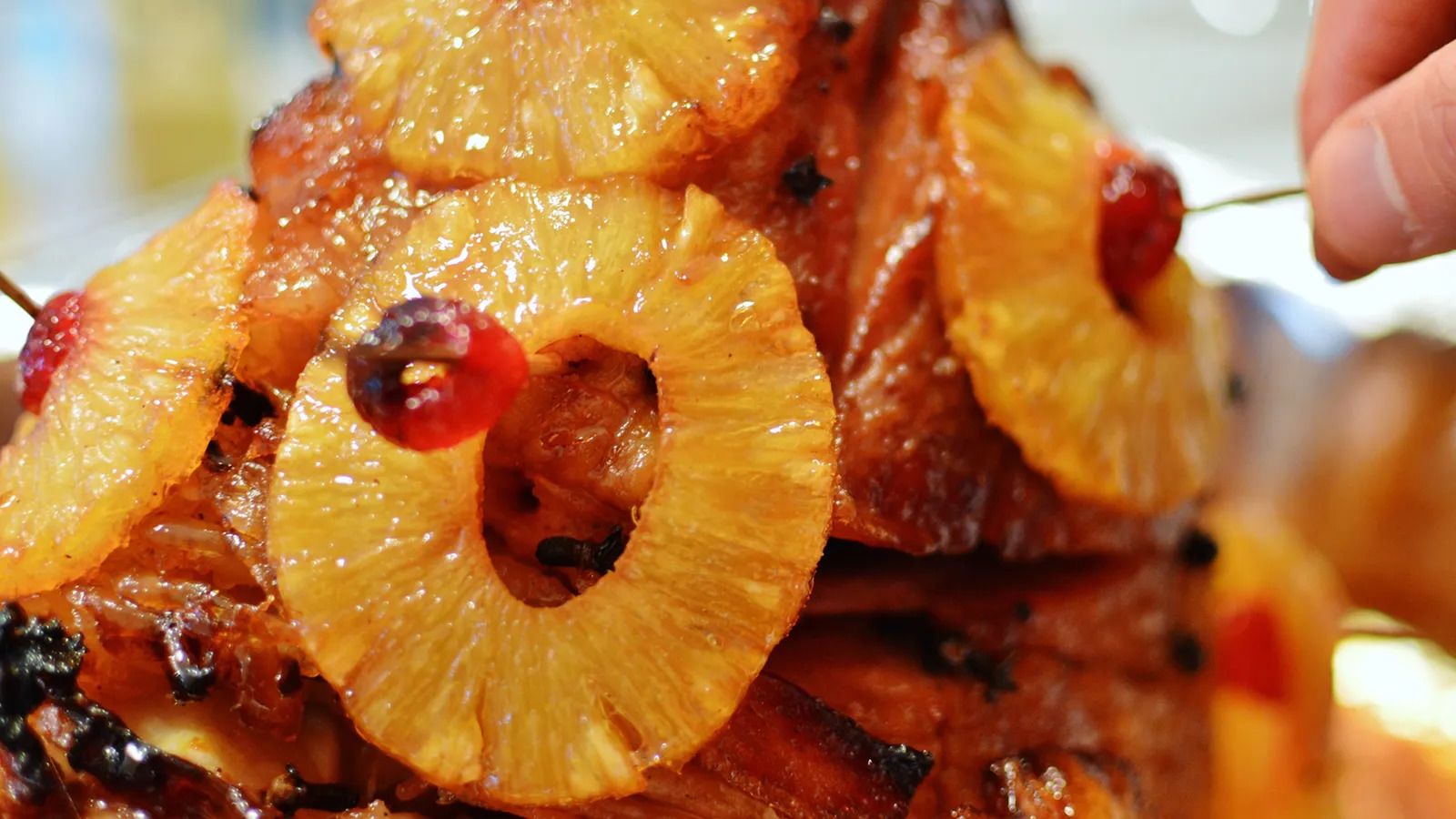 And this leads to another intriguing theory proposed by a group of data scientists in 2011. After analysing the ingredient combinations in common recipes from around the world, they produced a flavour network that paired foods that shared flavour compounds. They found that in Western cuisines, there was a tendency to pair ingredients that share flavour compounds, while East Asian cooking tended to use ingredients with few compounds in common.

Astringent and acidic flavours are commonly used in cooking as palate cleansers between courses, largely because they cut through the oil and fat. One team of French and US researchers revealed that repeatedly alternating samples of astringent drinks with fatty foods helps to lower the overall sensation of fattiness and bitterness than would be experienced when rinsing with water or not alternating between bites. So, it is possible that the acidity of the pineapple chunks gives a regular palate cleanse every couple of bites, helping to make the next mouthful of doughy, tomato and cheesy goodness all the more enjoyable.

But most pineapple used on pizzas comes from cans rather than being freshly cut, so does that impact on the flavour at all?

The battle between ham-and-pineapple lovers and haters has even sparked a not-entirely-serious diplomatic dispute. In 2017, the president of Iceland, Guðni Thorlacius Jóhannesson, told an audience of school children that he was so fundamentally opposed to pineapple on pizza that he would ban it in his country if he could. He even went on to issue a statement on Facebook clarifying his position on pineapples in general, and their specific presence on pizza.

No less a figure than Canada's prime minister Justin Trudeau chimed in on Twitter, saying: "I stand behind this delicious Southwestern Ontario creation." Jóhannesson later softened his stance, admitting in 2018 that he "went a step too far".

Sam Panopoulos had no idea what he started.