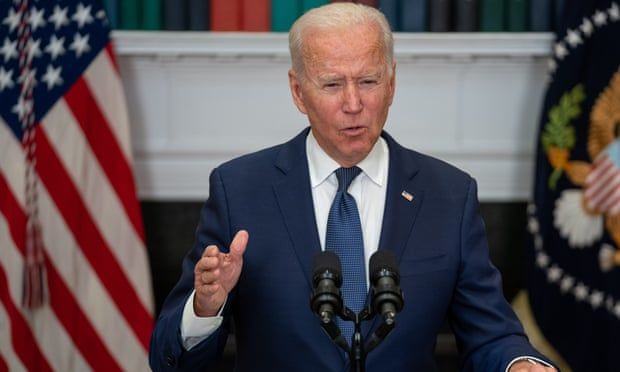 Afghanistan: what does each nation hope to get out of the G7 meeting?

Analysis: Tuesday’s meeting called by Boris Johnson may include postmortem on Joe Biden’s handling of crisis

The emergency meeting of G7 nations on Tuesday – called by Boris Johnson as this year’s chair of the G7 – is in essence a gathering of the vanquished but faces a threefold agenda: how to ensure as many Afghans as possible can leave Kabul, and whether the US is prepared to stay beyond the original 31 August deadline for the withdrawal of all US forces; how a resettlement programme can be coordinated for the medium term; and finally, how to encourage the Taliban to form an inclusive government, including by threatening sanctions or withholding recognition.

But each country will bring its own concerns and an ugly postmortem on Joe Biden’s handling of the crisis cannot be ruled out.

Joe Biden, after months assiduously flattering his European allies, knows he has lost trust, including patently from across the political spectrum in the UK, normally one of America’s closest allies. The professional reputation of his foreign policy team has also taken a hammering, as have his plans to champion democracy.

As a gesture of reconciliation with Europe he may try to keep the airport evacuation open a few days longer.

He also faces questions about how he will prevent Afghanistan becoming a terrorist spawning ground, leaving the west exposed as it was 20 years ago.

Although his personal ratings are sliding, he believes the decision to abandon nation-building remains popular, and has won significant support among progressives demanding a new, less militarist style of American leadership.

UK ministers have been the most open in their criticism of Biden’s decision to press ahead with the evacuation timetable set by his predecessor, Donald Trump, but they accept that the Kabul airlift ends when the US forces decide to leave.

Boris Johnson has said he will seek an extension from Biden of the deadline for the withdrawal of US troops, and believes Biden, as a sign of goodwill, owes this to his European partners, even if the extension is a matter of days. But the Taliban has rejected this, and the firefight at the airport on Monday morning underscores the security risks.

UK defence ministers have come close to accepting the Taliban has a veto, and this requires Russia and China to persuade the Taliban that an early display of flexibility is in their self-interest. Regardless, the evacuation will soon have to enter a second, land-based phase that will be more contingent on Taliban approval.

The French share some of the UK’s sentiments. In the Élysée Palace’s account of a call between Biden and the French president, Emmanuel Macron, released on Friday, but excised in the White House account, Macron described the mission to evacuate allies as a “moral responsibility” and told Biden: “We cannot abandon them.” France’s foreign and defence ministers are travelling to the United Arab Emirates to organise the airlift of refugees to regional Gulf powers.

The French foreign minister, Jean-Yves Le Drian, has also said: “We are concerned about the deadline set by the United States on August 31. Additional time is needed to complete ongoing operations.”

France is likely to back set conditions on international recognition of the Taliban, a point that Boris Johnson has been emphasising in his bilateral calls with G7 leaders. Macron said: “Those who opt for war, obscurantism and indiscriminate violence, they are choosing isolation.”

But probably more than any G7 country, France has reason to feel vindicated by the Kabul debacle, and most inclined to challenge the continued assumption that a unilateralist US president can continue to dominate western foreign policy and defence. The need for Europe to become militarily more self-reliant has been a constant theme of Macron’s presidency, and Biden’s willingness to show that a Democrat administration is just as likely to act arbitrarily as a Republican one strengthens his case.

The French foreign policy establishment has been united in seeing Biden’s leadership as disastrous and a landmark in the decline of American leadership. Michel Duclos, a former French ambassador, for instance, predicted the chances of China invading Taiwan had increased by 20 percentage points, to 30%.

With an eye to his re-election next year, Macron has stressed that the EU cannot be expected to accept a wave of Afghan migration.

Mario Draghi, the Italian prime minister, is also the chair of the wider G20 and he has been angling to hold a special in-person G20 summit in Rome in September that would see Russia and China, two of the relative beneficiaries of the US withdrawal, come to explain their vision for Afghanistan.

Italy backs a deadline extension, but feels the past weeks must mark a turning point for EU defence. In an interview with La Repubblica, Gen Claudio Graziano, the president of the EU military committee and ex-chief of the Italian defence staff, said: “This is a defeat of the whole west and of what we have believed in over the last 20 years. It is certainly not the end of Nato, as some analysts have written, but it is clear that the Alliance must be rethought.” He claimed the EU needed “a central command that has sufficient forces at its disposal, effective funds, coordinated operational structures, investments in cyber and new technologies. The EU has a battlegroup with 5,000 soldiers ready for rapid deployment: in a situation like that of Kabul airport it could make a difference.” Italy is aiming to airlift out 2,500 refugees who had helped the country.

Angela Merkel, in the dying days of her chancellorship and in the midst of an election campaign in which her party is struggling, has been working the phones to persuade countries neighbouring Afghanistan, such as Pakistan and Tajikistan, to act as clearing houses for refugees. But despite the offers of cash, she is meeting resistance. Germany has so far flown 2,700 refugees out, and is talking to the Taliban about opening land routes.

Germany has been shaken by Kabul’s fall. Armin Laschet, who is the conservative candidate to succeed Merkel as chancellor in September’s election, has described Kabul’s fall as “the biggest debacle Nato has seen since its foundation and it is an epochal change that we are facing”. Heiko Mass, the foreign minister, has spoken of a collective error. The Green party’s Annalena Baerbock has suggested Germany take 50,000 refugees, proposed a meeting of the G7 with the countries bordering Afghanistan and called for a German inquiry into the overall fiasco.

Germany has been holding discussions with Turkey to see whether it would be willing to operate a civilian-only evacuation operation at Kabul airport after the military operation has ended.

Turkey has for weeks been offering to run Kabul airport, but had not initially envisaged taking on this operation in the context of a triumphant Taliban, but instead with the previous government in power. Turkey does not want to be the home of another mass evacuation of refugees, and favours an orderly migration process.

The G7 is now always attended by the two leaders of the European Union, and the president of the European Commission, Ursula von der Leyen, has asked all countries that participated in the mission in Afghanistan, European and non-European, to offer enough quotas for resettlement and safe routes so that shelter can be guaranteed. But Janez Janša, the prime minister of Slovenia, the current rotating president of the EU, insisted Europe “will not allow the strategic mistake of 2015 to be repeated. We must only help the individuals who helped us during the Nato operation.”

At the start of a national election campaign, Justin Trudeau, the Canadian prime minister, has found himself under attack for failing to foresee the pace of the Taliban advance and for the bureaucratic barriers facing Afghans who helped the Canadian forces and are now seeking refuge. Early signs in the polls shows Trudeau is suffering, even though Canada’s military involvement, which ended a decade ago, had enjoyed bipartisan support.

Canadian defence forces have airlifted out more than 1,000 Afghans who helped Canadian forces. Trudeau’s government has pledged to take 21,000 Afghans, but the desperate stories emerging from Kabul hardly help a government in office. Trudeau has not joined the criticism of Biden’s handling of the issue, but if the polls continue to turn against him, he may feel forced to do so.

The country least directly involved in the crisis, Japan is nevertheless sending three military aircraft to Afghanistan, starting on Monday, to evacuate its citizens and local staff. Japan’s key concern will be to ensure that Biden sticks to his pledge that the Afghanistan pullout reflects a reordering of Washington’s priorities towards competing with China in south-east Asia. Tokyo’s fear is that the withdrawal reflects a growing US isolationism.