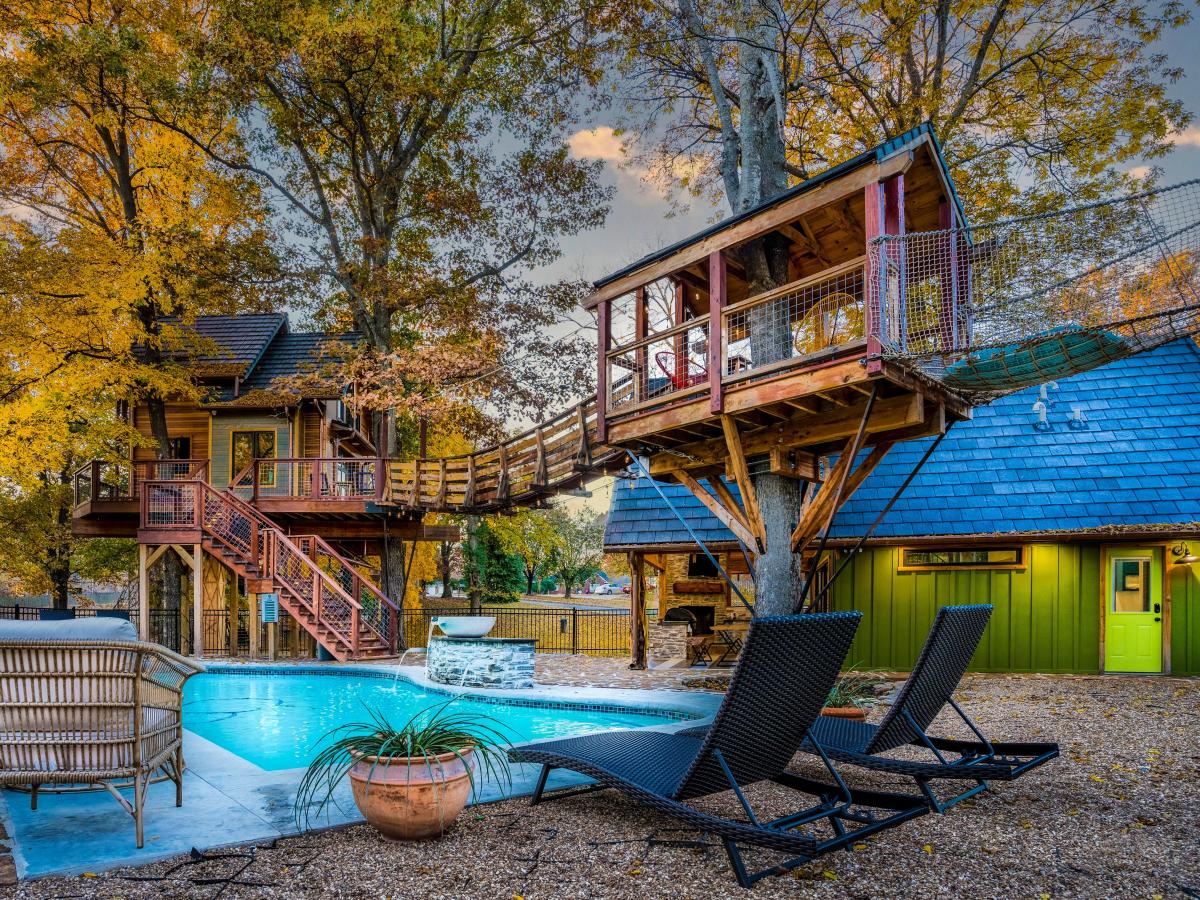 An Arkansas man spent 2 years building a treehouse as a retirement project. He's listing it for $1.25 million, and it comes with a heated pool and a swinging bridge — check it out.

"I thought we would be done in six to eight months, and it took two years," owner Mike Fitzgerald said of the effort it took to complete the treehouse.

*  Mike Fitzgerald spent more than two years and at least $600,000 building a treehouse.

*  The treehouse is supported by four trees, and it's connected to a patio on another tree via a swinging bridge.

Mike Fitzgerald spent his childhood outdoors, climbing trees and making forts. He always dreamed of having his own treehouse, and now that he's nearing 60, he decided it was time to make it happen. 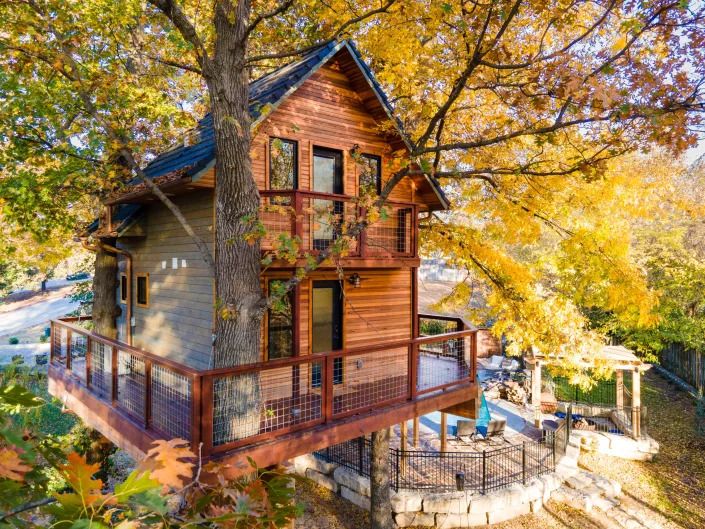 The exterior of the treehouse, which is supported by four trees.
"We didn't have the cool, little games on TV that kids play with today," Fitzgerald told Insider. "We spent time outside, and I always had dreams of being out there and building something."

For Fitzgerald, who worked in the tile industry, it was also a retirement project to keep himself busy.

A local treehouse expert he consulted with, Josh Hart from Natural State Treehouses, said the trees on his property weren't strong enough. As they were looking at the trees in the vicinity, they ended up on his neighbor's property — which happened to be for sale.

"I didn't even think about that property at the time, but I just said, 'How about these four trees?'" Fitzgerald said.

The trees — which are oak and hickory trees — turned out to be the perfect type for the design Fitzgerald had in mind, and he decided to buy the land. He paid $30,000 for the lot, property records show.

Fitzgerald wanted the treehouse to be fully elevated by the trees, without any other support. Before he could build anything, he needed an arborist to examine the trees' health. 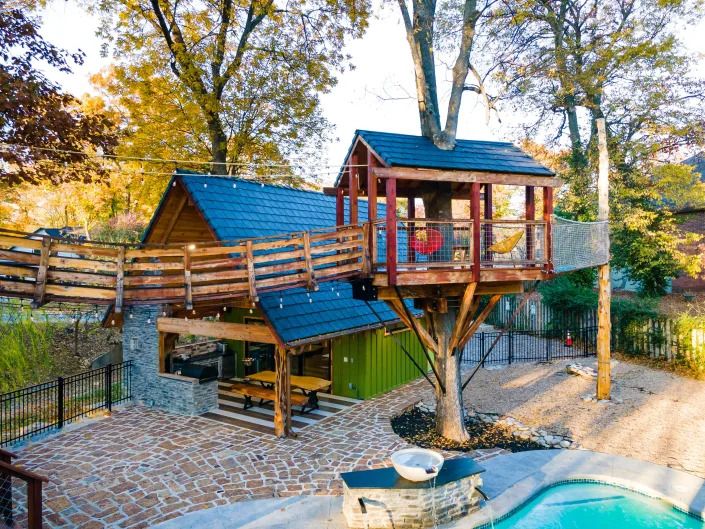 The treehouse is connected to a lookout patio via a swinging bridge.

Every branch, root, and trunk had to be carefully inspected, Fitzgerald said.

"You're depending on that tree to last so that your treehouse has the support to stand," he said.

Fitzgerald also reached out to the Nelson Treehouse and Supply team — stars of the Animal Planet "Treehouse Masters" reality TV show — for advice.

"I had to tell them how high I was going to build it off the ground. I had to measure the trees at the base and up where the treehouse was going to be, and then send all those measurements to them," Fitzgerald added.

The treehouse is supported by four trees, and it's connected to a lookout patio on another tree via a swinging bridge. The bridge, which is almost 30 feet long, was a challenge to complete, Fitzgerald said. 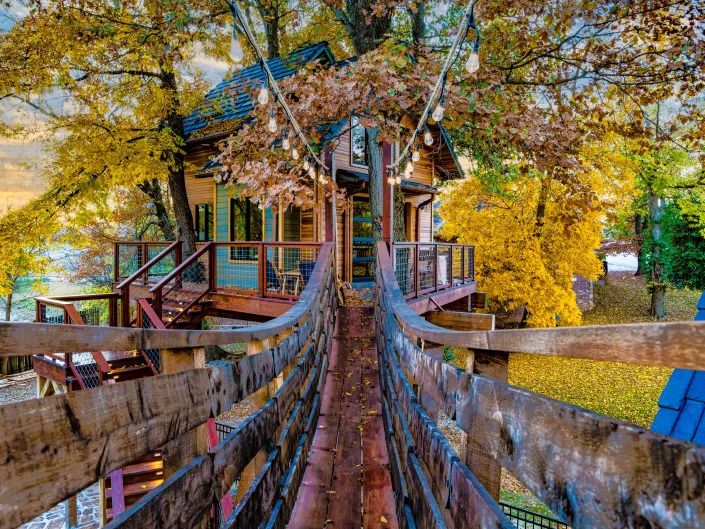 The bridge to the lookout patio is almost 30 feet across.

The design of the final bridge was inspired by a bridge in a "Treehouse Masters" video, but modified with additional supports, Fitzgerald said.

"If you go across the bridge, there's a big hammock that hangs out over the ground on the other end. You can lay out on this big net that just hangs 15 feet up in the air," he added.

Fitzgerald completed the bulk of the interior work himself, building the cabinets and bathrooms. 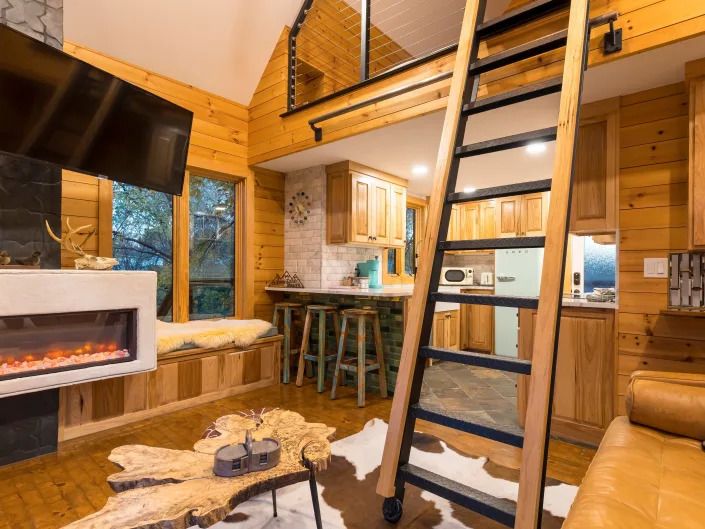 The interiors of the treehouse.

The treehouse has a loft-style design. The primary living area is downstairs, and a movable ladder is used to access the sleeping quarters upstairs.

Most of the wood used in the build was sourced locally and most of the tiles were handmade, Fitzgerald said.

The treehouse floor was one of the most labor-intensive parts of the build, he added: "I had to cut up literally thousands of reclaimed pieces of wood and put them on the floor."

The construction took two years and four months to complete. Fitzgerald started in December 2019 and finished building the property in April 2022. 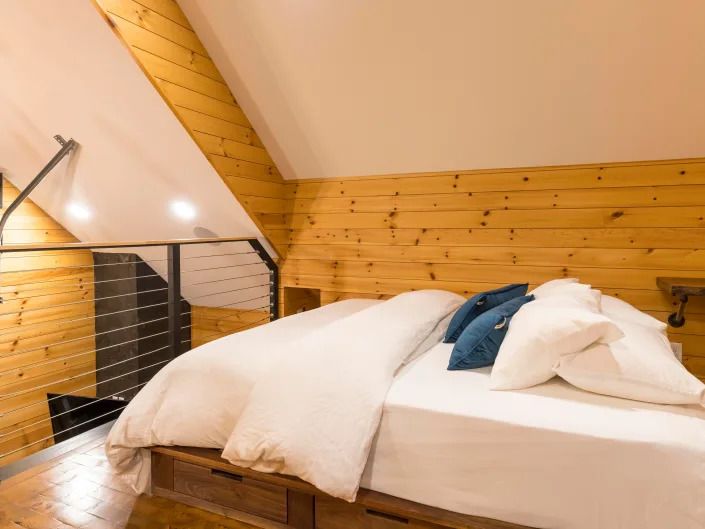 "We did the treehouse first because you have to be really careful with the trees when you bring your equipment on," Fitzgerald said. "You don't want to run equipment over the root system."

It took over a year to build the treehouse and another year to complete the main house, Fitzgerald said.

"I remembered how hard it was to put the treehouse roof on. It's up about 30 feet off the ground and everyone was scared to death to get up there, so it took a couple of extra months to get the roof on the treehouse," he added.

One of the most striking features of the main house is the outdoor kitchen and dining area, Fitzgerald said. 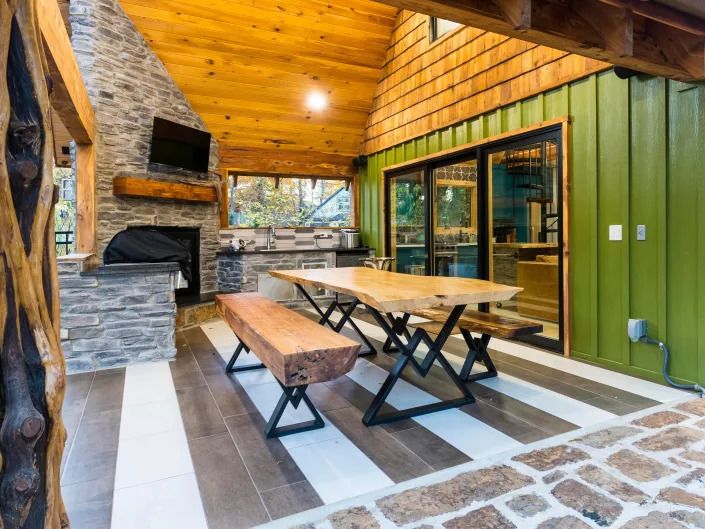 The outdoor kitchen and dining area of the main house.

"We got a big piece of wood with live edges and made it a really cool outdoor table — people just love to sit out there. It's got a grill and an outdoor fireplace as well," Fitzgerald said.

Like the treehouse, the main house has two stories. A spiral staircase connects the primary living area to the loft bedroom upstairs. 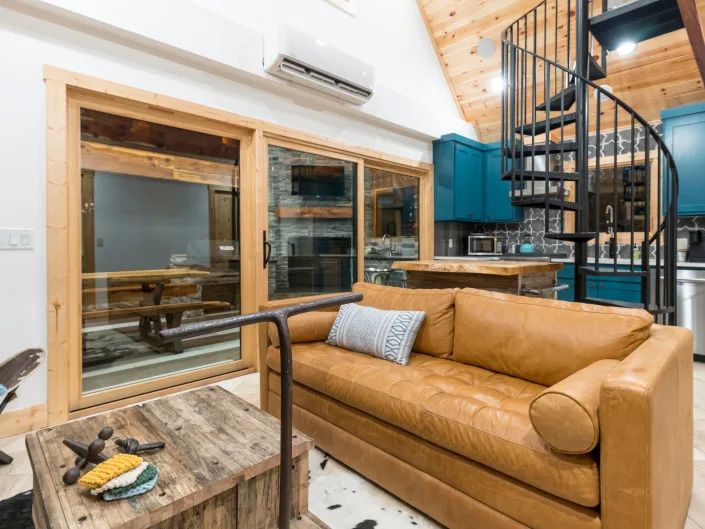 The living area of the main house.

Some cabinets in the main house were made from reclaimed truck beds. Fitzgerald also repurposed the wood from an old wagon by turning it into a coffee table.

Looking back, Fitzgerald says that the treehouse construction process was much more challenging and time-consuming than he expected. 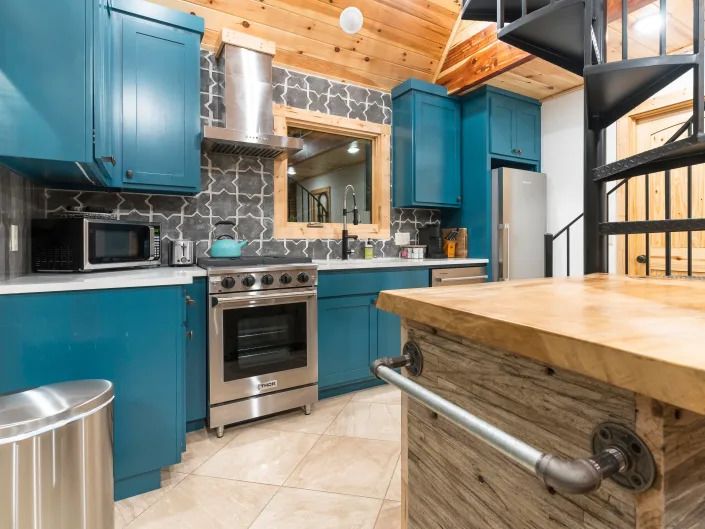 Both the treehouse and the main house have a combined area of 866 square feet, and they each have their own kitchens, bathrooms, and bedrooms.

"I thought we would be done in six to eight months, and it took two years," Fitzgerald said. "Doing everything so that you could preserve the trees was probably what really slowed everything down."

The scale of his treehouse was also new, not just to him but to the local builders and the treehouse expert he consulted with, Fitzgerald added: "I think everybody that worked on the project, it was the first time they had ever done anything like this."

Fitzgerald said the treehouse has been attracting attention for years. 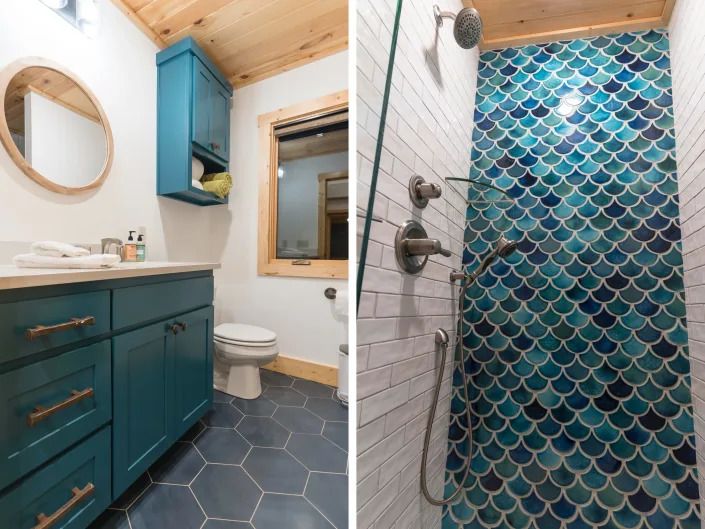 One of the bathrooms on the property.

"From that day we started putting the beams up in the trees, we would have people drive by and just stop to take pictures," Fitzgerald said.

Although the property is near a local bike trail, it's still a quiet area, he said.

"We had a grand opening and invited most of the people in the neighborhood to come, and they were all just really excited to see it. It's made me really proud of it," Fitzgerald added.

The stones in the driveway and around the pool were sourced from Oklahoma, and transporting them was difficult due to their weight, Fitzgerald said. 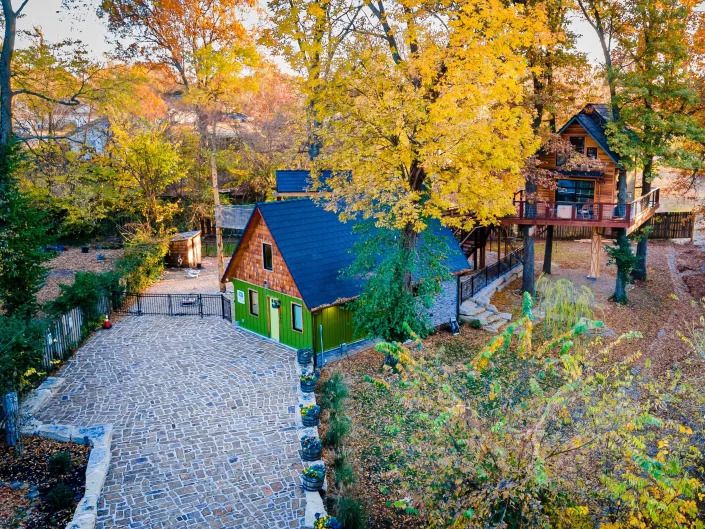 The driveway to the property.

"We had to go over there and stack all those stones on a pallet, put them on truck beds, and bring them back," Fitzgerald said.

It was about a three to four-hour drive and it required multiple trips to transport them over, he said.

Fitzgerald has some advice for anyone looking to build their own treehouse or home: Remember to track all costs because things can get expensive quickly. However, it pays off to invest in good materials. 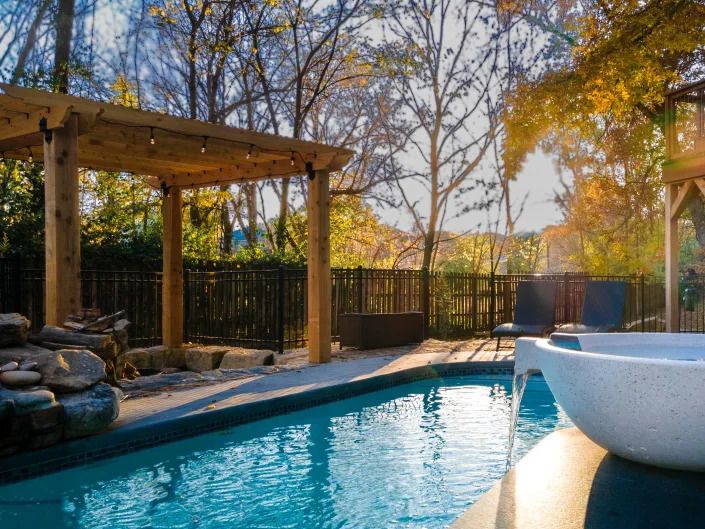 "When we started off, we had no idea how much it would cost," Fitzgerald said.

The project turned out to be expensive because of the process of building the house into the living trees without damaging them, he said. He also didn't cut corners with materials and said that while upfront expenses were high, he expects to save on repairs in the future.

"I made sure that we built with materials that would last. The outside of the treehouse is redwood, the deck is redwood, and that's wood that doesn't rot very easily and isn't affected by bugs," Fitzgerald said.

Fitzgerald is putting the entire property on the market for $1.25 million. But until he finds a new owner, he will be renting the place out on Airbnb. 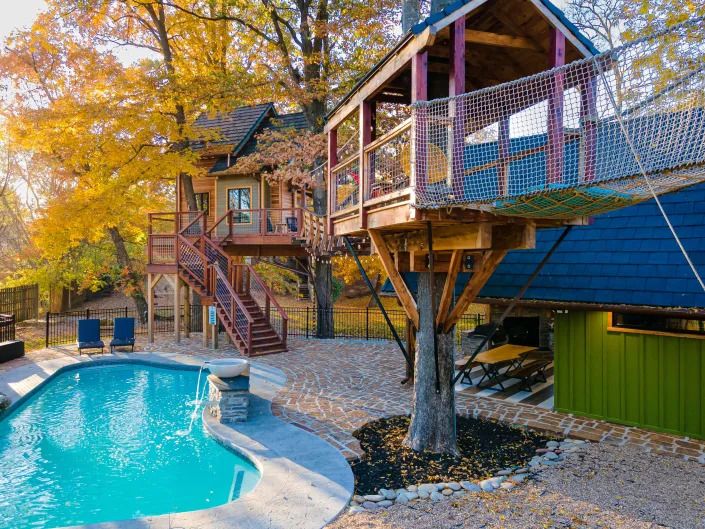 An alternative view of the lookout patio and the pool, with the main house on the right.

Houses in Bentonville, Arkansas, have a median listing home price of $485,000, per data from real-estate platform Realtor.com. There are currently 615 single-family homes for sale in the neighborhood, with prices between $180,000 and $11.6 million. The $1.25 million treehouse property is in the mid-price range.

"I had always planned on selling it a couple of years after I owned it," Fitzgerald said. "Being a tile layer, I don't have money that I could put in a 401K or put back, so I took what savings we had and put it into the project."

In the meantime, he's recently listed the treehouse on Airbnb, where it can be rented for $486 a night.

"I'm there every day if it's not rented, just cleaning and relaxing around it. I love being at the treehouse for sure," Fitzgerald said. "It's going to be very hard to see it go."