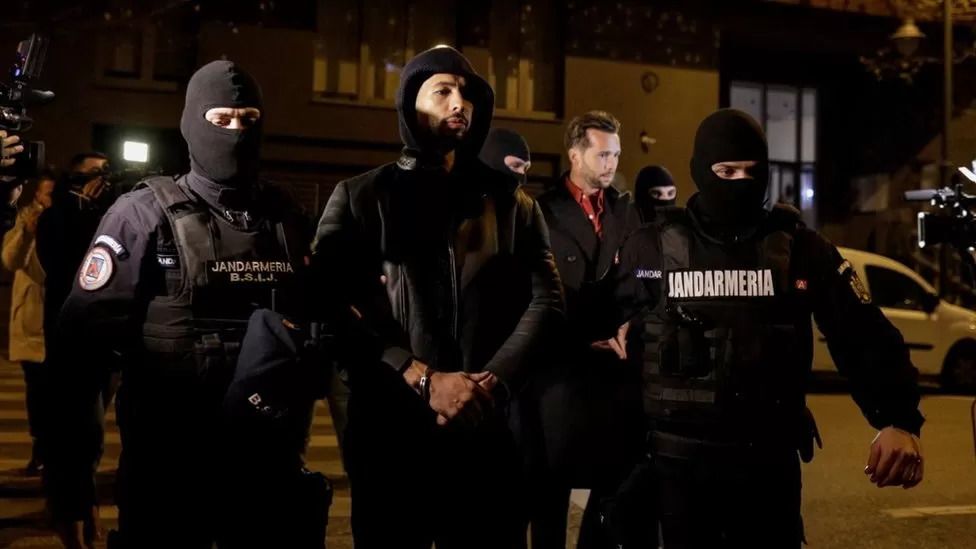 Controversial online influencer Andrew Tate has reportedly been detained in Romania as part of a human trafficking and rape investigation.
Mr Tate - who was detained alongside his brother Tristan - had his house raided in the capital, Bucharest.

A lawyer for the brothers confirmed their detention, Reuters said.

The former kickboxer rose to fame in 2016 when he was removed from British TV show Big Brother over a video which appeared to show him attacking a woman.

He went on to gain notoriety online, with Twitter banning him for saying women should "bear responsibility" for being sexually assaulted. He has since been reinstated.

"The four suspects ... appear to have created an organised crime group with the purpose of recruiting, housing and exploiting women by forcing them to create pornographic content meant to be seen on specialised websites for a cost," prosecutors said, according to the Reuters news agency.

The brothers have been under investigation since April alongside two Romanian nationals.

Video circulated widely on social media appears to show Mr Tate and his brother being led away from a luxury villa.

Romania's Directorate for Investigating Organized Crime and Terrorism (DIICOT) issued a statement, but did not name the Tate brothers, stating that two British citizens and two Romanian citizens were suspected of being part of a criminal group focused on human trafficking.

It also released a video of the raid, showing guns, knives, and money on display in one room.

Prior to gaining worldwide notoriety, Mr Tate - a British citizen who was born in the US - fought professionally as a kickboxer and won world titles.

In 2016, he entered the Big Brother house but was soon removed after a video was circulated, which appeared to show him hitting a woman with a belt.

At the time of his expulsion from the show, Mr Tate said the video had been edited, calling it "a total lie trying to make me look bad".

He went on to gain notoriety online, with Twitter banning him for saying women should "bear responsibility" for being sexually assaulted.

His posts on other online sites promote misogyny and target women and have millions of views, with the BBC's disinformation and social media correspondent Marianna Spring saying earlier this year his content had "raised concerns about the real-world effect it could have".

Alongside former US president Donald Trump, he has recently been allowed back onto Twitter following Elon Musk's takeover.