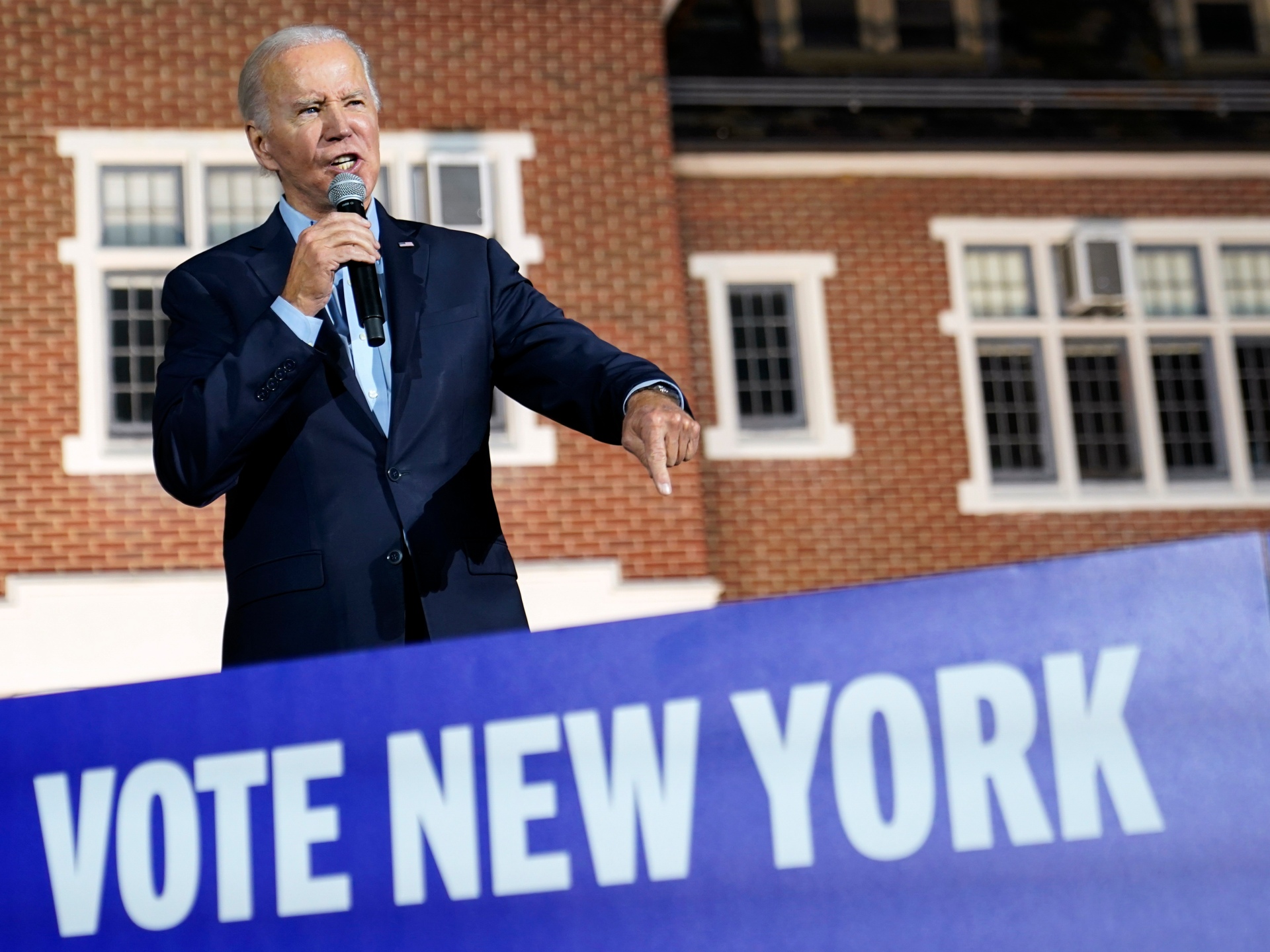 President Joe Biden will hold rally in Maryland while his predecessor Donald Trump will be in Ohio on last campaign day.
An election year that has unfolded against the backdrop of economic turmoil, the elimination of federal abortion rights and broad concerns about the future of democracy is concluding with a final full day of campaigning in which leaders of both parties will issue urgent appeals to their supporters.

President Joe Biden is holding a Monday evening rally in Maryland, where Democrats have one of their best opportunities to reclaim a Republican-held governor’s seat. The appearance is in line with Biden’s late-campaign strategy of sticking largely to Democratic strongholds rather than stumping in more competitive territory, where control of Congress may ultimately be decided.

Biden’s predecessor Donald Trump will hold his final rally of the campaign in Ohio. As he readies another run for the White House, Ohio holds special meaning for the former president because it was one of the first places where he was able to prove his enduring power among Republican voters.

His backing of JD Vance was crucial in helping the author and venture capitalist – and one-time Trump critic – secure the GOP’s nomination for a Senate seat.

With more than 41 million ballots already cast, Monday’s focus will be ensuring that supporters either meet early voting deadlines or make plans to show up in person on Tuesday. The results will have a powerful effect on the final two years of Biden’s presidency, shaping policy on everything from government spending to military support for Ukraine.

In the first national election since the violent January 6 insurrection, the final days of the campaign focused on fundamental questions about the nation’s political values.

Campaigning in New York for Governor Kathy Hochul on Sunday, Biden said Republicans were willing to condone last year’s mob attack at the US Capitol and that, after the recent assault on Paul Pelosi, husband of House Speaker Nancy Pelosi, some in that party made “light of it” or were “making excuses”.

“There’s never been a time in my career where we’ve glorified violence based on a political preference,” the president said.

Meanwhile, during a Sunday evening Trump rally in Miami, a reference to Nancy Pelosi prompted chants of “Lock her up!” – a stark reminder of the nation’s deep political divide.

Trump was campaigning for Florida Senator Marco Rubio’s re-election, but also focused on his own political future. After telling a crowd in Iowa last week that he is “very, very, very probably” going to run for president again, he again teased the possibility on Sunday and encouraged supporters to watch his Ohio rally.

“I will probably have to do it again, but stay tuned,” Trump said, teasing the Monday event. “We have a big, big rally. Stay tuned for tomorrow night.”

Not attending the Miami event was Florida’s Republican Governor Ron DeSantis, who is running for re-election against Democrat Charlie Crist and is widely considered Trump’s most formidable challenger if he also were to get into the White House race.

DeSantis held his own, separate events on Sunday in other parts of the state where he stuck to the centrepieces of his re-election campaign, including railing against COVID-19 vaccine mandates. The governor’s counter-political programming avoided antagonising Trump – meaning it did not deliver the duelling 2024 events that could be in his and Trump’s near future.

Trump said on Sunday that Florida would “re-elect Ron DeSantis as your governor”. But he was more confrontational during a Pennsylvania rally on Saturday, referring to Florida’s governor as “Ron DeSanctimonious”.

It is a rivalry that has been simmering for more than a year as DeSantis has taken increasingly bold steps to boost his national profile and build a deep fundraising network – even as Trump remains unquestionably the party’s most popular leader.

For national Democrats, meanwhile, the focus is on their narrow control of the House and the Senate, which could evaporate after Tuesday.

Voters may rebuke the party controlling the White House and Congress amid surging inflation, concerns about crime and pessimism about the direction of the country. History suggests the party in power will suffer significant losses in the midterms.

Biden has made the case that the nation’s very democracy is on the ballot and the first lady went to Texas on Sunday to sound a similar alarm. “So much is at stake in this election,” Jill Biden said in Houston. “We must speak up on justice and democracy.”

Travelling in Chicago, Vice President Kamala Harris said, “These attacks on our democracy will not only directly impact the people around our country, but arguably around the world.”

Trump has long falsely claimed he lost the 2020 election only because Democrats cheated and has even begun raising the possibility of election fraud this year. Federal intelligence agencies are warning of the possibility of political violence from far-right extremists.

Ronna McDaniel, the Republican National Committee chairwoman, said Democrats were “inflation deniers”, trying to deflect the other side’s branding of her party as anti-democratic for rejecting the results of 2020’s free and fair presidential election simply because Trump lost it.

“If we win back the House and the Senate, it’s the American people saying to Joe Biden, we want you to work on behalf of us and we want you to work across the aisle to solve the problems that we are dealing with,” McDaniel told CNN.
#Donald Trump  #Joe Biden  #COVID-19  #vaccine  #Covid