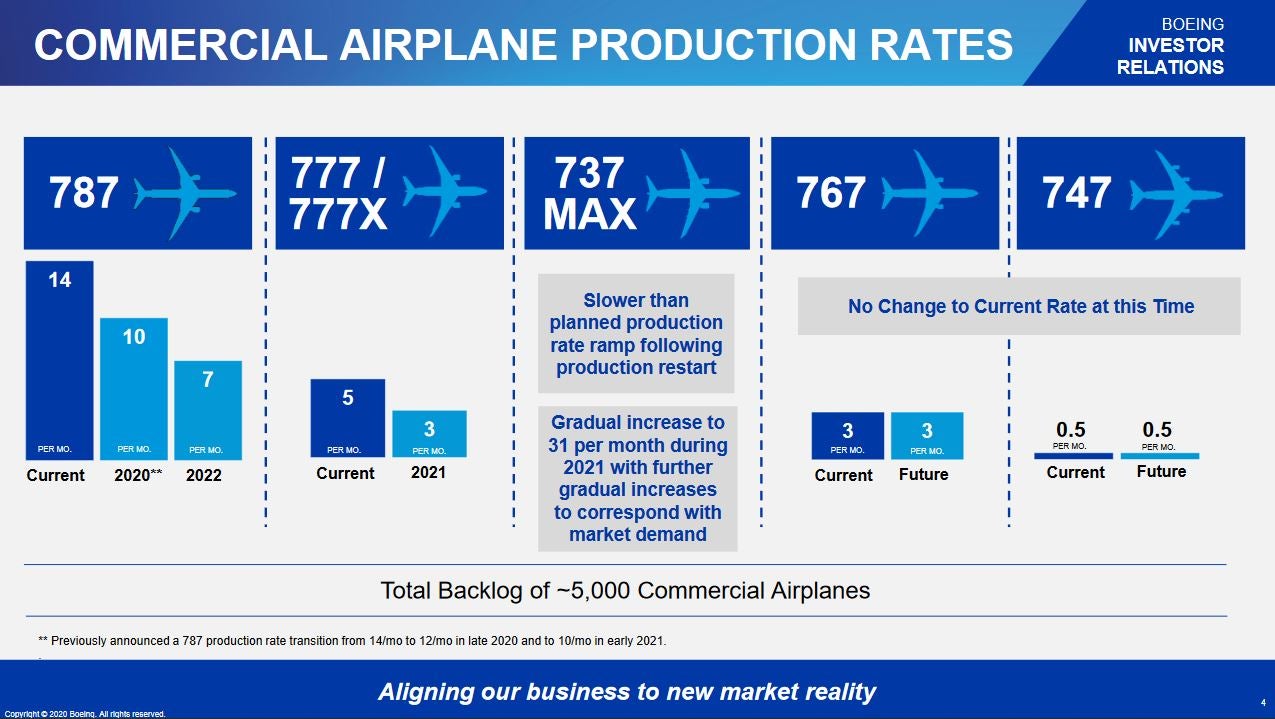 Boeing's problems are multiplying from the COVID-19 pandemic. The stock may trade at a steep discount to its early-2019 high, but investors should still stay away.

Boeing (NYSE:BA) had a terrible 2019, as its top-selling product, the 737 MAX, was grounded by safety issues last March. The company repeatedly missed self-imposed deadlines to get the 737 MAX recertified. As a result, Boeing delivered just 380 commercial jets last year: down 53% year over year. This caused the company to post a core operating loss of $3.4 billion and burn $4.3 billion of cash in 2019.

Conditions are far worse in 2020. The 737 MAX is still grounded, and now the COVID-19 pandemic has caused demand for new aircraft to shrivel up. Not surprisingly, Boeing's recent first-quarter earnings report was quite awful. Given that airline executives almost universally agree that it will take a long time for air travel demand to recover, Boeing's pain could continue for many years.

The pace of Boeing's aircraft deliveries slowed again last quarter. The company delivered just 50 commercial jets, with the majority being 787 Dreamliners. As a result, the commercial airplanes segment reported a $2.1 billion operating loss. This included a $336 million charge to repair a substandard component on older 737 jets.

Boeing's defense business also lost money last quarter because of an $827 million pre-tax charge related to its troubled KC-46 military tanker program. The only bright spot was the services segment, which generated $708 million of operating income (up 8% year over year) on $4.6 billion of revenue. The net result was a $1.7 billion core operating loss, about two-thirds of which was driven by the one-time items discussed.

Investors should be far more concerned about Boeing's cash flow. Boeing burned through $4.7 billion last quarter: more than its full-year cash burn for 2019. Between compensation payments related to the 737 MAX grounding, delayed aircraft deliveries resulting from customers' distress, and Boeing's need to support its supply chain, cash burn will likely continue to exceed reported losses for most if not all of 2020.

This has forced Boeing to steadily increase its borrowings. It ended Q1 with $38.9 billion of debt and $15.5 billion of cash and investments. As recently as the end of 2017, Boeing had negligible net debt, with $11.1 billion of debt offset by $10 billion of cash and investments. It also had a pension deficit of $15.9 billion as of the end of 2019. If anything, that pension deficit is bigger now, because of a sharp plunge in interest rates and weak stock market performance year to date.

A (very) tough road ahead

Boeing's management recognizes that it will take a while for demand to return, especially for the wide-body jets that serve long-haul international routes. As a result, it is slashing 787 production by 50% by 2022 (from 14/month to 7/month) and cutting 777 family production from 5/month to 3/month next year. Boeing had previously announced plans to reduce 787 Dreamliner output to 10/month by early 2021, but it had intended to start increasing production again by 2023.

Boeing also expects to ramp up 737 MAX output more slowly than it had planned previously. It currently estimates that the production rate will reach 31/month by the end of 2021. Prior to the 737 MAX grounding, it was in the midst of boosting production to 57/month.

While Boeing is doing its best to cut costs, dramatically lower production rates will put pressure on profit margins and lead to much lower free cash flow than the $13.6 billion the company generated in 2018. (The commercial airplanes business accounted for 60% of Boeing's 2018 revenue and likely contributed an even greater proportion of its cash flow.)

Furthermore, the near-term pain will extend beyond the commercial airplanes division. With airlines retiring lots of planes and desperate to cut costs, demand is now plummeting on the commercial side of Boeing's services division. As noted above, the services business was the lone bright spot in Boeing's first-quarter earnings report.

Too much debt and a cloudy future

By the end of this year, Boeing is likely to have at least $35 billion of net debt, and its pension deficit could be close to $20 billion. And while management expects free cash flow to turn positive again next year, that would only be due to the one-time tailwind of delivering many of the 737 MAX jets assembled after the grounding last year and currently held in storage.

Boeing knows that it needs to solidify its balance sheet by repaying the debt it has incurred since the beginning of 2019. However, with free cash flow likely to remain weak for an extended period, that could take five years or more. Until then, the company's dividends and share buybacks will remain suspended.

Bulls might argue that Boeing stock has fallen by more than two-thirds since peaking last February and that even if it takes five years for conditions to return to normal, the stock is still a bargain.

However, this overlooks the risk that slower growth represents the "new normal" for the global aviation business. While people will eventually get over their fears of COVID-19, lenders that are getting burned yet again by airlines -- particularly overseas, as U.S. airlines have had fairly solid profit margins and balance sheets in recent years -- may hesitate to extend credit to airlines in the years ahead. Weaker airlines may be allowed to fail, and carriers that grew rapidly by offering unsustainably low fares could be forced to retrench. That could weigh on aircraft demand beyond 2025.

Thus, Boeing's annual free cash flow could remain well short of the all-time high of $13.6 billion reached in 2018 for the foreseeable future. Meanwhile, the aerospace giant continues to carry an $80 billion market cap. At that price, there simply isn't enough upside to justify taking the risk of buying Boeing stock today.