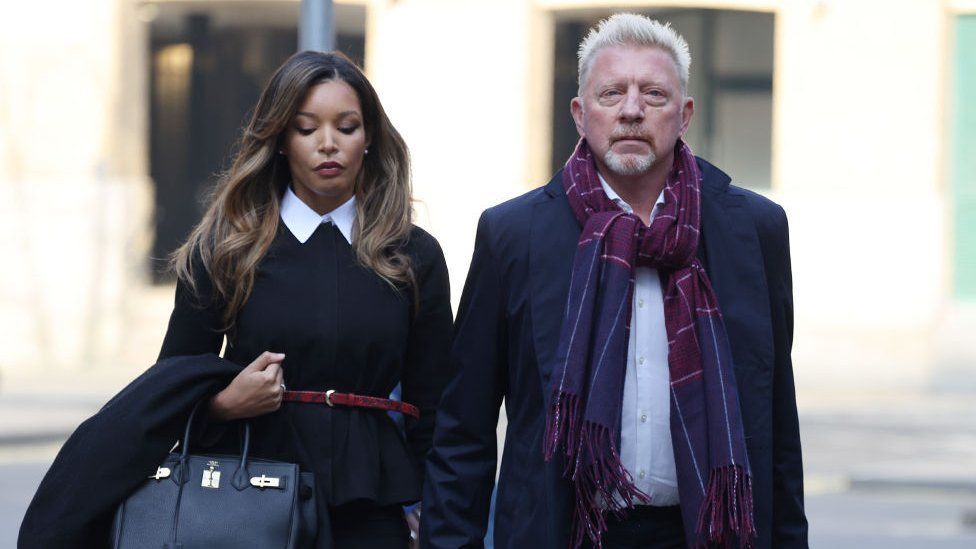 Ex-tennis star Boris Becker has spoken of his shock and embarrassment at being declared bankrupt, as a trial into his alleged failure to declare assets continues.

Mr Becker was declared bankrupt in 2017 and is accused of failing to hand over assets including trophies and medals.

He denies 24 charges against him.

The court heard the bankruptcy decision came days before that year's two-week Wimbledon tournament, where he was working for the BBC as well as Australian and Japanese television.

Becker said he felt "very embarrassed", adding: "Because it was all over world news, and I walked through the gate of Wimbledon and everyone knew. I was embarrassed because I was bankrupt."

He told jurors the bankruptcy was also in the midst of a "stressful time" with his then wife Sharlely "Lilly" Becker, while they were living in "separate quarters" at a £22,000-a-month rented house in Wimbledon, south-west London.

Becker, who arrived at court hand in hand with his partner Lilian de Carvalho Monteiro, sat at the witness box on Monday to give evidence, as the jury was told he has injuries to his ankle and knees.

His barrister, Jonathan Laidlaw QC, took him through his career after he was catapulted to stardom when he became the youngest player to win the Wimbledon men's singles titles, aged 17, in 1985.

The court heard the former world number one earned a "vast amount" of money, winning about $50 million (£38m) in prize money and sponsorship deals.

He said he helped his parents build a house in his native Germany and paid cash for a family home in Munich, a property in Miami, Florida, and an estate in Mallorca, which was worth about €50 million (£42m) at the height of the property market.

But Becker, who went on to coach current world number one tennis player Novak Djokovic, work as a BBC commentator and act as a brand ambassador for firms including Puma, said his earnings "reduced dramatically" following his retirement in 1999.

He said he was involved in an "expensive divorce" from ex-wife Barbara Becker in 2001, involving high maintenance payments to their two sons, and had to support his daughter Anna Ermakova and her mother, in a deal which included a £2.5m Chelsea flat.

German national Becker, who was resident in Monte Carlo and Switzerland before moving to the UK in 2012, said he had "expensive lifestyle commitments", including millions owed to Swiss authorities as well as in Germany.

The 24 charges Mr Becker has been accused of include:

* Nine counts of failing to deliver up trophies and other awards


* Five counts of failing to disclose estate, including the properties in Germany and London, shares and a bank account

The trial, which is expected to last up to three weeks, continues.