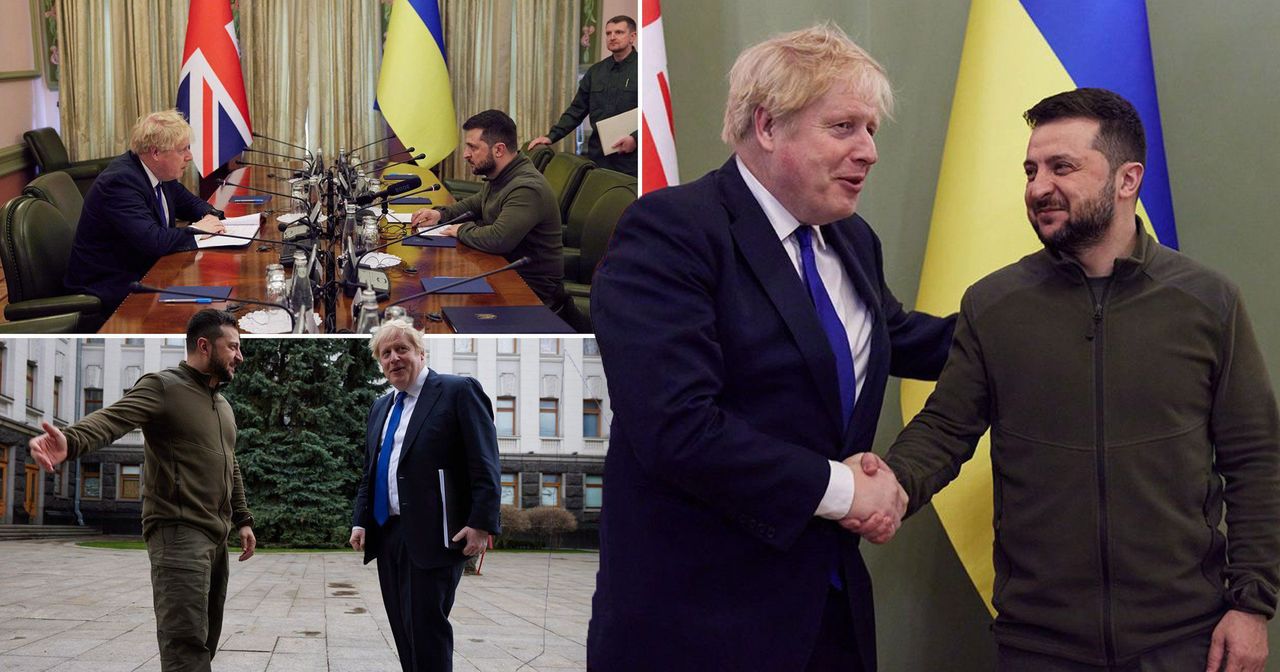 No 10 said the visit was a "show of solidarity" with the Ukrainian people.

Senior officials in Mr Zelensky's team praised the UK for support during its conflict with Russia.

Mr Johnson's visit to Kyiv was not announced in advance and the first indication he was in the city came when a photograph of his meeting with President Zelensky was put on Twitter by the Ukrainian embassy in London.

A Downing Street spokesman said: "The prime minister has travelled to Ukraine to meet President Zelensky in person, in a show of solidarity with the Ukrainian people." 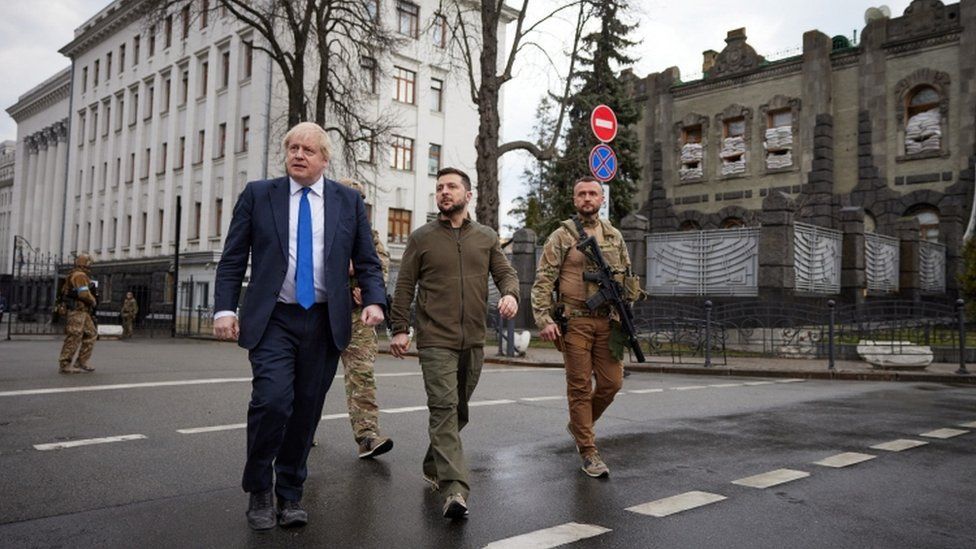 The two leaders walked through central Kyiv after their talks

In a statement after the meeting, Mr Johnson paid tribute to "President Zelensky's resolute leadership and the invincible heroism and courage of the Ukrainian people", saying: "Ukraine has defied the odds and pushed back Russian forces from the gates of Kyiv".

He said: "I made clear today that the United Kingdom stands unwaveringly with them in this ongoing fight, and we are in it for the long run.

"We are stepping up our own military and economic support and convening a global alliance to bring this tragedy to an end, and ensure Ukraine survives and thrives as a free and sovereign nation."

Speaking in a video address alongside President Zelensky a short while later, Mr Johnson said Ukrainians "have shown the courage of a lion but you, Volodymyr, have given the roar of that lion".

He reiterated that the UK and other countries supporting Ukraine would continue to tighten economic sanctions on Moscow, including moving away from the use of Russian hydrocarbons.

The PM added: "Over the last few hours I've been able to see quite a lot of your beautiful country and it's an amazing country. I've also seen the tragic effects of the war, an inexcusable war, an absolutely inexcusable and unnecessary war." 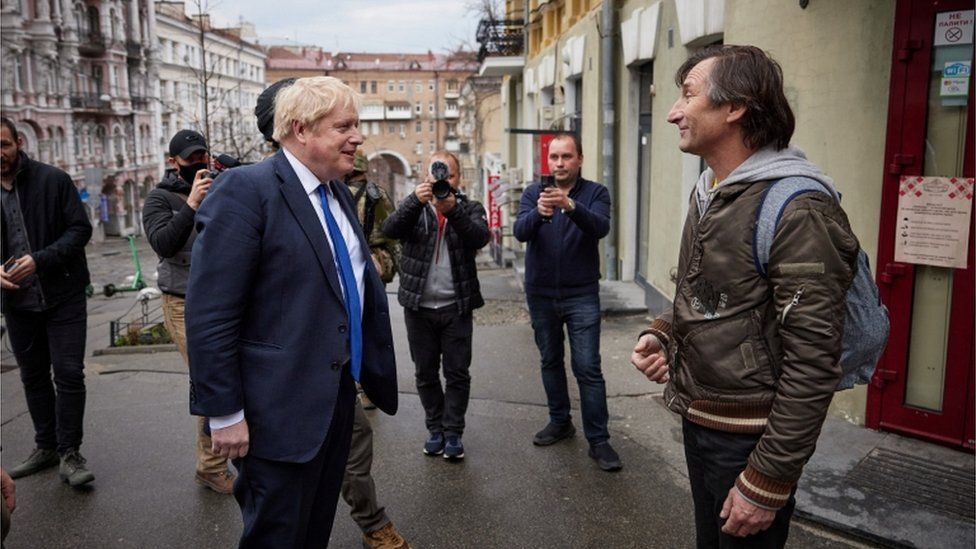 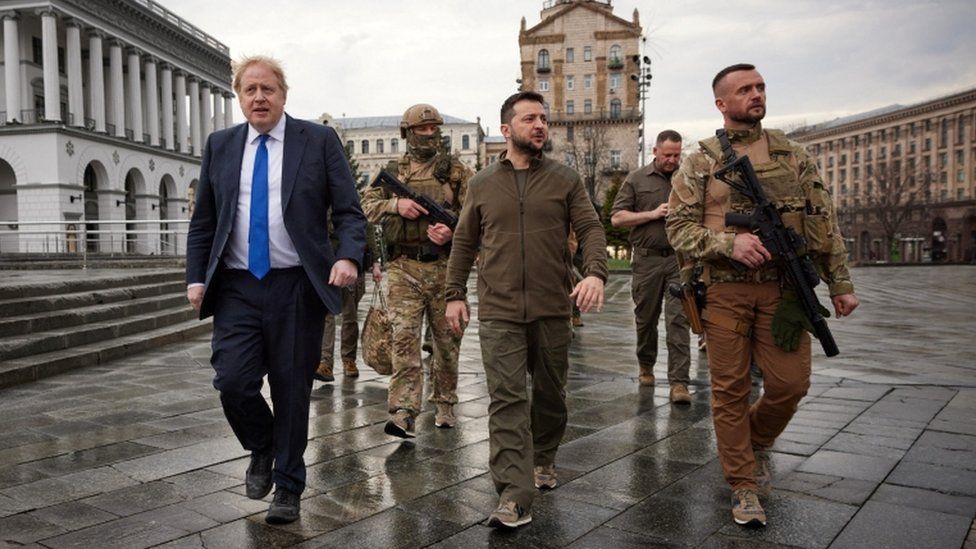 Mr Zelensky welcomed the UK's "decisive and significant support" for his country and urged other Western allies to intensify the pressure on Moscow.

"We have to exert pressure in the form of sanctions. It is time to impose a complete embargo on Russian energy resources. They should increase the amount of weapons being supplied," he said.

In a Facebook post, Andriy Sybiha, deputy head of the Ukrainian president's office, said: "The UK is the leader in defence support for Ukraine. The leader in the anti-war coalition. The leader in sanctions against the Russian aggressor."

European Commission President Ursula von der Leyen and the EU's foreign policy chief Josep Borrell both made visits to Ukraine for talks with President Zelensky on Friday, and Austrian Chancellor Karl Nehammer met him in Kyiv on Saturday.

But Mr Johnson is the first member of a G7 country to travel to the Ukrainian capital for talks during the conflict.

Mr Zelensky has called on the international community to hold to account Russian forces who carried out the missile strike on Kramatorsk station, which was packed with women and children trying to flee the area.

The Kremlin has denied responsibility for the attack. 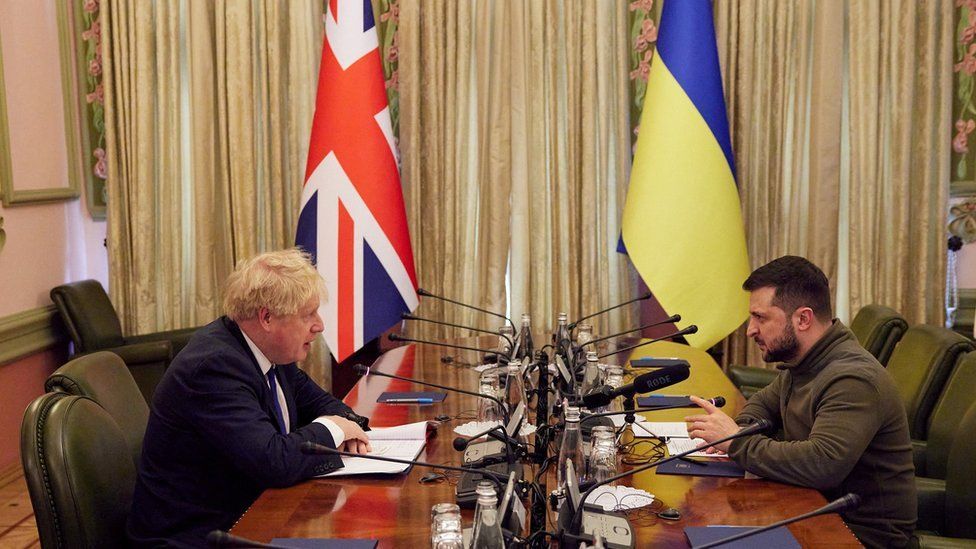 Mr Johnson's visit to Kyiv came the day after the UK announced £100m of weapons for the country.

It followed an appeal from Ukraine for more arms as it prepares for an expected Russian offensive in the east of the country, after Moscow pulled back its forces from around Kyiv.