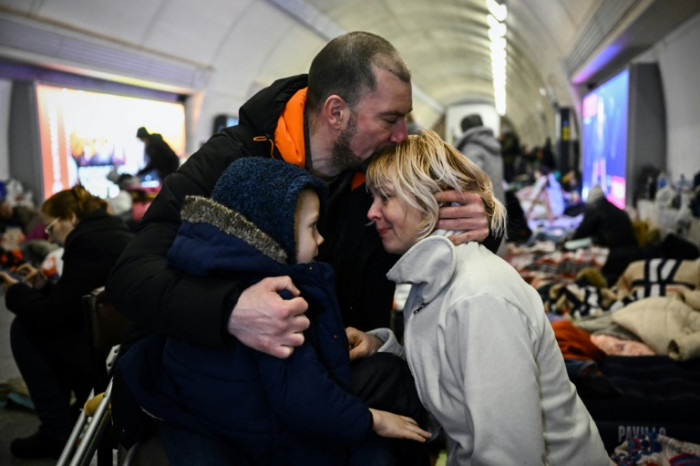 The wounded Ukrainian soldier dropped his crutches to the Kyiv metro station floor and picked up his five-year-old son, first wiping tears from his shaking wife's face.

The sweet smell of sweat from the bodies of sheltering Ukrainians permeated the damp, chilly air around them.

But Sergiy and Natalia Badylevych were oblivious to the cooking odours and the dozing families spread out on the floor of what has become one of Kyiv's deepest and safest bomb shelters.

They had been reunited for the first time since witnessing a Russian missile strike on Kyiv's TV tower on Tuesday evening.

Sergiy carefully stretched out his broken leg and admitted he thought he had lost his two sons.

"Yesterday, they stepped outside, and two minutes later there was a blast," he recalled in the rapid stutter of a very stressed man.

"I called my wife, I wanted to tell her to run home, but someone on the street was yelling at her to run to the shelter," he said.

"I had no idea whether she was alive."

The 41-year-old pulled his little boy closer with his left hand while rubbing his face vigorously with his right.

His slightly older son stood in evident confusion a few steps away and let his eyes wander across the odd scene of his local metro station turning into a refuge.

Natalia tried to steady her hands. The 42-year-old glanced at her husband and turned to gaze on her sons.

"Now the little one is afraid to go outside. He says 'Mum no, anything but that'. And the older one was crying 'Mum' at night," she said.

Ukraine's capital began building its subway system while memories of World War II were still raw in the early 1960s.

Its 52 stations and tunnels were built with the dual purpose of moving people and sheltering them should bombs start falling again.

But Kyiv metro chief Viktor Braginsky admitted he could never imagine the stations actually being used as bomb shelters in his lifetime.

"I still really can't believe it," Braginsky said at the entrance of the Dorohozhychi metro stop. "Everything still feels too surreal."

Each one can shelter up to 1,000 people from the shellfire and Grad missiles Russian forces have been firing at targets on Kyiv's outskirts since last week.

Still more people could fit into the dark tunnels.

Braginsky said up to 100,000 could theoretically hide underground in Kyiv until their food runs out.

'Everyone tries to help'

The Dorohozhychi station is just half a block from the TV tower targeted by the Russians -- an attack that killed a family of four and a journalist.

Many of the dozens of families sheltering here have been sleeping on the station's stone floor for the past six nights.

One family was living in a camping tent. Most simply spread their books and food out on bedsheets and towels.

Pensioner Antonina Puziy was peeling potatoes and chopping carrots for her soup.

The 75-year-old decided to come down with her grandchildren the moment the first Russian missiles set off frightening booms across Kyiv in the pre-dawn hours of Thursday.

"We live on the 12th floor. It is very frightening up there," she said and pointed her potato peeler up at the station's oval ceiling.

"My daughters bring down some food. And the neighbours bring down pastries for the little ones. Everyone tries to help."

Some of the metro's residents occasionally go up the escalator and squeeze past the heavily-armed soldiers to puff on a cigarette and try to comprehend the surreal scenes on the streets.

The charred remains of the building hit by the Russian missile offer a dark reminder of why it may be safer to stay underground.

But IT engineer Volodymyr Dovgan worries about what might happen should Russian soldiers take control of the streets.

Some are looking up at a silent TV screen hanging at one end of the platform showing the news.

Images of US President Joe Biden and Russia's Vladimir Putin are intermixed with those with burning and destroyed Ukrainian buildings.

Dovgan looks down from the screen with a blank expression and stares down on the floor.

"What happens to us down here when the food runs out?" the 40-year-old asks. "Do we try to get out and run?"