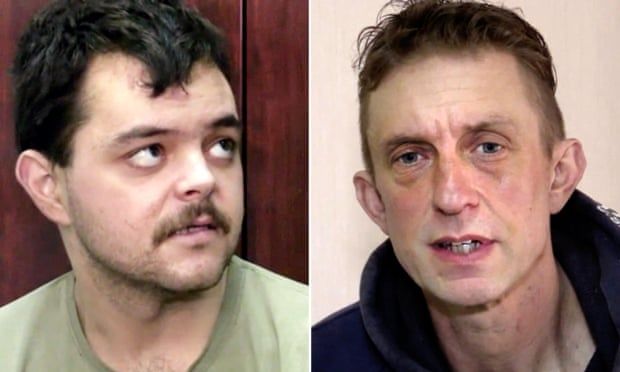 Moscow parades Shaun Pinner and Aiden Aslin, with pair calling for Ukraine to agree prisoner swap
Two British fighters captured in Ukraine by Russian forces have been paraded on Russian state television asking Boris Johnson to help free them, in a dramatic escalation of the propaganda war.

It was unclear how freely the two men were able to talk in the video, which was aired on the Rossiya 24 state TV channel on Monday.

At the same time as Russia broadcast footage of the two British men, Ukraine’s foreign intelligence service released video of Medvedchuk, nicknamed the “dark prince” of Ukrainian politics, asking to be swapped too.

In his appeal to the Russian and Ukrainian leaders, Vladimir Putin and Volodymr Zelenskiy, Medvedchuk asked to be exchanged for the defenders of the besieged city of Mariupol – where Pinner and Aslin were based before their capture – and that any civilians be allowed to leave.

The footage marks a serious escalation of the propaganda war between Russia and Ukraine and is the first time a prisoner swap has been suggested publicly between the two countries. The central involvement of two British fighters will heap pressure on Johnson to intervene.

The UK Foreign Office (FCDO) has been contacted for comment. The FCDO has been providing support to the men’s families in recent days but has limited ability to gather information or give consular support on the ground in Ukraine.

“A lot’s gone on over the last five or six weeks that I’m not fully aware of. Obviously I understand that Mr Medvedchuk has been detained and we look to exchange myself and Aiden Aslin for Mr Medvedchuk.

“Obviously I would really appreciate your help in this matter and pushing this agenda. Myself I’ve been treated well. Fully understand the situation that I’m in. We’ve been fed, watered, and that’s all I can really say but I beg on my behalf and Aiden Aslin’s behalf for help us in an exchange for Mr Medvedchuk.”

The unidentified interviewer was then shown separately speaking to Aslin, who was sat on a chair wearing a T-shirt bearing the emblem of Ukraine’s far-right Azov battalion. “I think that Boris needs to listen to what Oksana [Medvedchuk’s wife] has said,” said Aslin, who also looked nervous. “If Boris Johnson really does care about British citizens like he says he does then he will help.”

Pinner and Aslin, 28, have looked tired and bruised since they were captured while defending the city of Mariupol last week.

Medvedchuk is a key ally of Putin. He had been placed under house arrest last year to face treason and terrorism financing charges, which he denies.

He escaped a few days after the Russian invasion began in February, but was later captured by Ukraine.

In his video, published on Facebook by Ukraine’s SBU security service, Medvedchuk said he was a making a “plea for the Ukrainian side to exchange me for the defenders of Mariupol and its citizens who are there today have no opportunity for a safe exit through a humanitarian corridor”.

Pinner, a former soldier in the Royal Anglian Regiment, moved to Ukraine four years ago and considers it his adopted country, his family said in a statement on Monday.

They said Pinner was a well-respected soldier in the British army for many years and described him as “funny, much-loved, well-intentioned”.

They added: “In 2018 Shaun decided to relocate to Ukraine to use his previous experience and training within the Ukraine military.

“Shaun enjoyed the Ukrainian way of life and considered Ukraine as his adopted country over the last four years. During this time, he met his Ukrainian wife, who is very focused on the humanitarian needs of the country. He progressed into the Ukrainian marines as a proud member of his unit.”

The statement continued: “We would like to make it clear he is not a volunteer nor a mercenary, but officially serving with the Ukrainian army in accordance with Ukrainian legislation.

“Our family is currently working with the Foreign Office along with the family of Aiden Aslin, who is also being held by the Russian army to ensure their rights as prisoners of war are upheld according to the Geneva convention.”

Pinner’s family said they hoped for a quick resolution to allow the captured men to return to their families. “Our hearts go out to all those caught up in this horrific conflict.”
#Boris Johnson  #Facebook  #Johnson