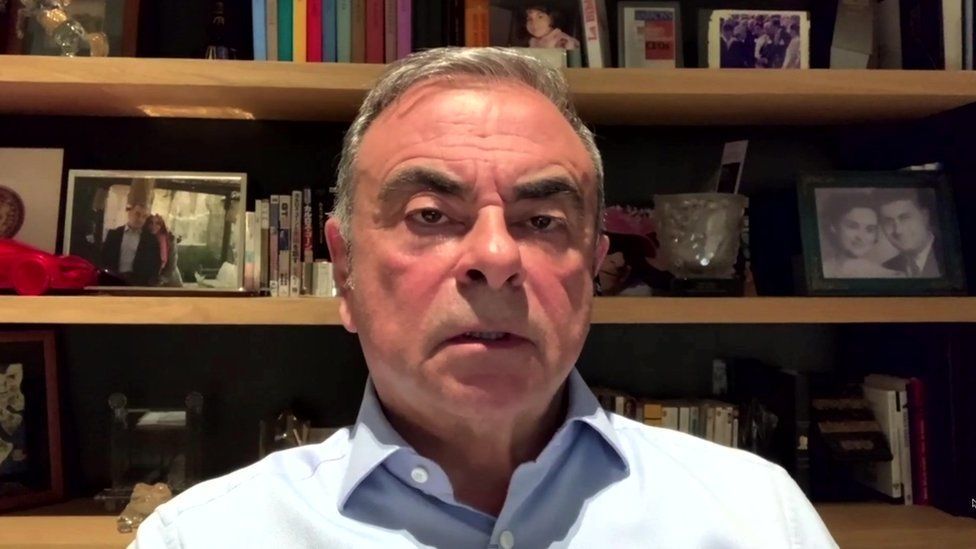 Fugitive former Nissan boss Carlos Ghosn has said he wants to stand trial on charges of financial wrongdoing in order to clear his name.

He spoke to the BBC after France issued an international warrant for his arrest, citing allegedly suspect payments.

Mr Ghosn said he was "expecting" the move though he was "surprised at the timing".

Mr Ghosn faced charges of financial misconduct when he fled Japan in 2019.

The former head of Nissan, once one of the most powerful figures in the car industry, is currently unable to leave Lebanon, as he is the subject of an Interpol Red Notice issued by Japan.

He told the BBC: "I want to stand trial because that's the only way I can get rid of the Red Notice which today forbids me from leaving Lebanon."

He said he wanted a trial in Lebanon on the charges brought against him in Japan, and any that emerge from the French investigation - and was "totally confident" he could prove his innocence.

Prosecutors in France are investigating claims that Mr Ghosn funnelled millions of euros from Renault through Suhail Bahwan Automobiles.

According to reports first published in the Wall Street Journal, he used the money for personal purchases including that of a 120-foot yacht.

An investigating magistrate in France has now issued five international arrest warrants against Mr Ghosn and four people linked to a car distributor in Oman.

Mr Ghosn told the BBC on Friday: "There was not one euro [from Nissan or Renault] that ended up benefitting me directly or indirectly".

He denied he was a fugitive from justice - and repeated previous claims he had left Japan because he would not have had a fair trial there.

Mr Ghosn said the charges against him were part of a conspiracy to derail his plans for a full merger between Renault and Nissan.

Since his escape, Carlos Ghosn has repeatedly claimed that the charges against him in Japan were baseless.

They were, he maintains, part of a conspiracy, designed to prevent him from orchestrating a merger between Nissan and its French partner Renault.

But for several years a separate investigation has been quietly taking place in France. An investigating magistrate recently questioned Mr Ghosn at length in Beirut.

The decision to issue an international arrest warrant suggests the French side believes there is a genuine case to answer at least.

Mr Ghosn has said he would be happy to stand trial in France to clear his name, and his lawyers seem confident that would happen. But there's a problem.

The former executive is banned from leaving Lebanon because he is still subject to an extradition request from Japan, even though that request is highly unlikely to be granted.

For the moment, he remains in a legal limbo.

Mr Ghosn once ran the Renault-Nissan-Mitsubishi Alliance, one of the biggest car-making groups in the world.

He was arrested in Japan in late 2018, and faced a number of charges, including claims he deliberately mis-reported his earnings and used company money to fund his own lifestyle. He denied any wrongdoing.

He has previously spoken of his dramatic escape from Japan, which involved disguising himself to go unnoticed through the streets of Tokyo, being hidden in a large music equipment box and fleeing to his native Lebanon as he awaited trial.

Mr Ghosn, who holds Brazilian, Lebanese and French passports, cannot be extradited to France from Beirut, although he confirmed to the BBC that he has been questioned as part of the investigation.

He said he thought France had issued the arrest warrant because under its law the investigation could not be closed unless he was in French territory.

"So in a certain way we were expecting something like this to happen," he said. "What was surprising was the timing...and also that we knew about it through an American newspaper...without me being officially alerted."

Earlier, his lawyer, Jean Tamalet at King & Spalding, told the BBC: "We believe this move is the only technical resort they found to be able in the future to try the case in a court of law."

Warrants were also issued against the current owners and former directors of the car distributor, Suhail Bahwan Automobiles.

The Omani firm did not immediately respond to a BBC request for comment.