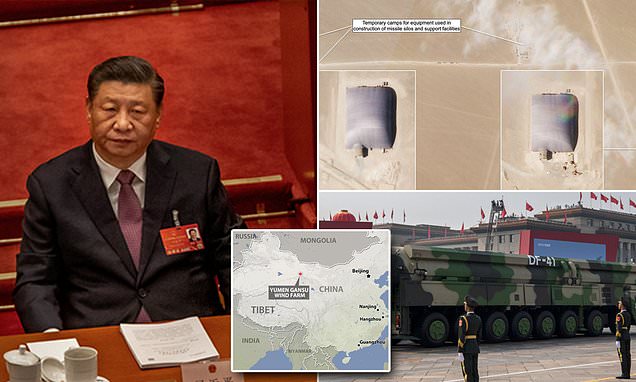 Chinese military officials believe their nuclear weapons are too 'outdated' to act as an 'effective deterrent' - so the country is accelerating construction on more than 100 missile silos.

China is accelerating its construction on more than 100 missile silos that can house nuclear weapons capable of reaching the United States, a move that the country's leaders say is meant to deter American forces from intervening in a potential future conflict over Taiwan.

Although Beijing has accelerated its expansion of nuclear weaponry in recent months, the government claims its plan is to only maintain enough arsenal necessary to ensure the nation's security interests.

Estimates by intelligence analysts and private-sector firms put China's nuclear arsenal somewhere in the 'hundreds' - far less than either the U.S. or Russia, which hold more than 4,000 each.

Pentagon officials say that if China continues developing its technology at the current pace, it will have just over 1,000 warheads by 2030.

Currently, Chinese military officials believe their nuclear weapons are too 'outdated' to act as an 'effective deterrent' against an American attack, according to the Wall Street Journal.

'China's inferior nuclear capability could only lead to growing U.S. pressure on China,' a source familiar with the plans told the newspaper.

This acceleration has raised concerns among American military officials and security analysts that China may be willing to make a 'surprise nuclear strike' against the U.S.

Beijing insiders, however, maintain that Chinese leadership is committed to 'not using the nuclear weapons first.'

China is accelerating its construction on more than 100 missile silos at a remote northern base that can house nuclear weapons capable of reaching the United States. Above, a satellite image of the site from July 2021 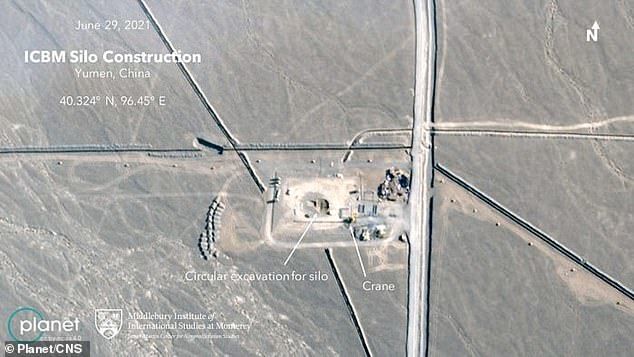 Chinese officials say that the rapid expansion of its nuclear arsenal is meant to deter American forces from intervening in a potential future conflict over Taiwan. Above, another image of the site from June 2021 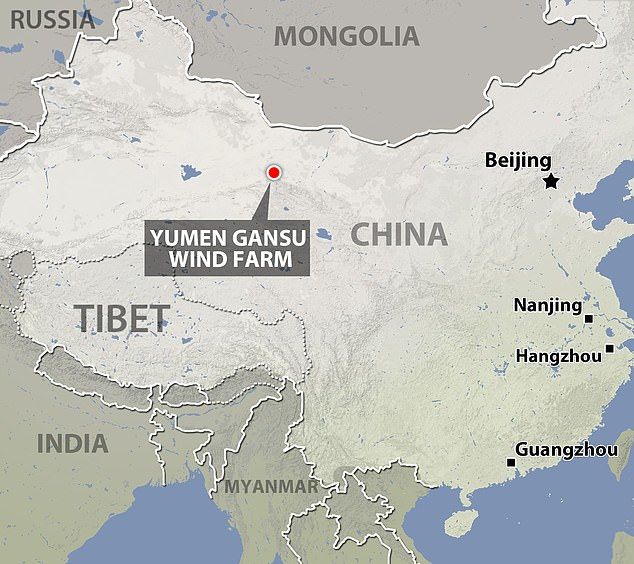 Pictures above a missile silo field in Yumen, a rural area in China's northern Gansu province, revealed that last 45 temporary covers that were placed over each of the suspected missile silos had been removed

American intelligence analysts say the the most sensitive work on the Chinese silos has been completed, citing satellite images taken in January.

Pictures above a missile silo field in Yumen, a rural area in China's northern Gansu province, revealed that last 45 temporary covers that were placed over each of the suspected missile silos had been removed.

Matt Korda, a senior research associate for the Nuclear Information Project at the Federation of American Scientists in Washington, noted that two smaller silo fields located in western China appear to be in earlier stages of development.

The silos at each of those sites are reportedly capable of housing a new long-range missile, known as the DF-41, that is capable of striking the U.S. mainland. It was put into service in 2020.

Military analysts also claim that China is putting greater emphasis on its ability to respond to nuclear attacks.

The experts allege that Beijing, with assistance from Russia, is building an early-warning system that can detect incoming missiles.

In February 2021, the nation also launched a satellite that is believed to be the beginning blueprint of a space-based sensor system for missiles.

Additionally, China is said to be developing advanced weapons that could carry nuclear warheads, including hypersonic missiles, which experts allege the U.S. has 'proven defenses against.'

These developments and advance weapons could also give China a better chance to retaliate if it were to be struck first in a nuclear attack.

'All of these capabilities work together to say to the U.S.: 'There is no world in which you can engage in a nuclear first strike against China and not expect nuclear retaliation back on your cities, even with your missile defenses, even with your great counterforce capabilities,' Caitlin Talmadge, an associate professor of security studies at Georgetown University, told the Journal. 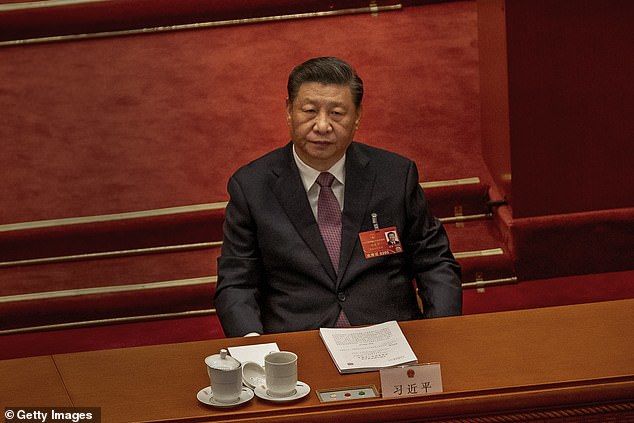 During a meeting with senior military officers in March 2021, President Xi Jinping (above) urged officials to 'accelerate the construction of advanced strategic deterrent systems' 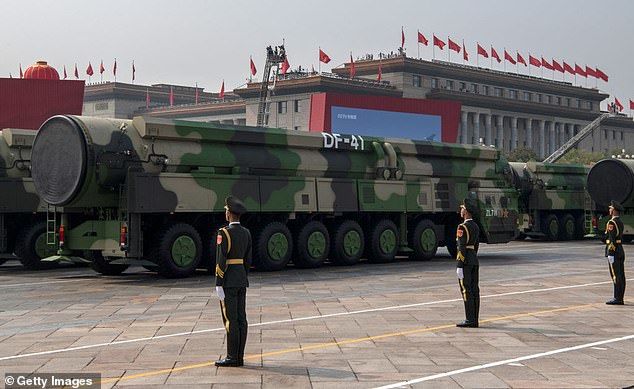 Despite China's recent efforts to expand its nuclear arsenal, the country continues to downplay its  pursuits to the public. Above, the Chinese military's new DF-41 intercontinental ballistic missiles at a parade in 2019

Those familiar with the plans told the newspaper Chinese leadership is fearful that the U.S. may try to topple the nation's Communist government, citing the Trump and Biden Administrations' more aggressive policies towards China.

These include recent attempts to ban Chinese apps from lucrative U.S. markets, deploying aircraft carriers to disputed waters in the South China Sea, selling arms to Taiwan and even accusing Chinese diplomats of espionage - which culminated in the forced closure of at least one of the country's American consulates, in Houston.

However, despite the leadership's apparently accelerated timeline, China continues to downplay its nuclear pursuits to the public.

'On the assertions made by U.S. officials that China is expanding dramatically its nuclear capabilities, first, let me say that this is untrue,' Fu Cong, director general of the Foreign Ministry's arms control department, told the nation earlier this year.

He instead argued the nation was only looking to have the minimum level of nuclear deterrents necessary to ensure national security and defense.

He said that China is working to ensure its nuclear deterrent meets the minimum level necessary for national defense.

However, during a meeting with senior military officers in March 2021, President Xi Jinping urged officials to 'accelerate the construction of advanced strategic deterrent systems.'

China has reportedly declined to answers questions about the alleged missile silo fields and their contents. 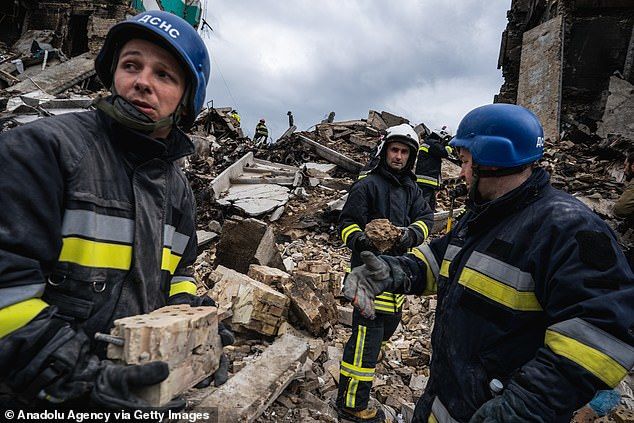 Leaders of the communist nation have also cited the conflict in Ukraine as a prime example of why its mission to develop increased 'nuclear deterrence' is paramount. Above, search and rescue teams seek survivors in the rubble of a Ukrainian building 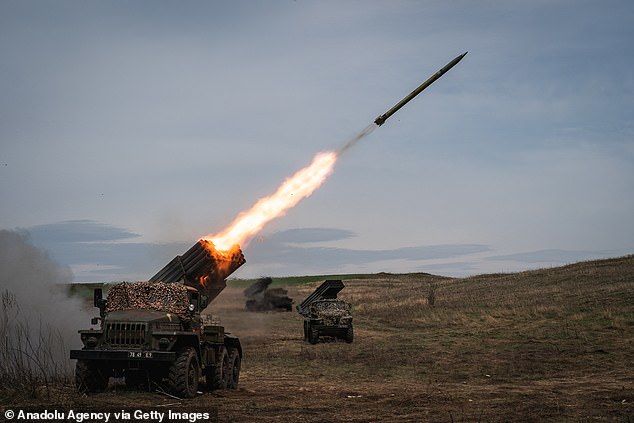 Chinese officials say Ukraine's decision to turn over its nuclear weapons in 1994 as a part of an agreement with western powers is a real-world example of what may happen to China if its arsenal is not upgraded properly. Above, Ukrainian forces fire GRAD rockets toward Russian positions in Donbas

Tensions between China and the nominally self-ruled island of Taiwan, which sits roughly 100 miles off China’s southeastern coast, have also ratcheted up in recent months.

China sees the island as part of its territory and has said several times it would resort to violent intervention to keep it that way - something that has thrust Washington into a conundrum ever since President Donald Trump made a point of tightening ties with Taiwan.

President Joe Biden has continued down this path, sending weapons, military training units and even delegations of American officials to the island to signal American support.

Beijing has taken these developments as a threat - and some see the recent expansion of its military capabilities as a direct result of America's involvement in Taiwan.

'Large-scale conventional military involvement over Taiwan could quickly lead one side or the other to talk themselves into thinking nuclear use may improve the situation for their side,' said Christopher Twomey, an associate professor of National Security Affairs at the U.S. Naval Postgraduate School in Monterey, Calif.

Leaders of the communist nation have also cited the conflict in Ukraine as a prime example of why its mission to develop increased 'nuclear deterrence' is paramount - arguing that Ukraine's decision to turn over its nuclear weapons in 1994 as a part of an agreement with western powers is a real-world example of what may happen to China if its arsenal is not upgraded properly.

'Ukraine lost its nuclear deterrence in the past and that's why it got into a situation like this,' a retired Chinese military official with knowledge of the nuclear program told the Wall Street Journal.

'No matter how the situation develops in the future, the world will be more confrontational,' the official said. 'Under such circumstances, China definitely needs to maintain nuclear deterrence.'