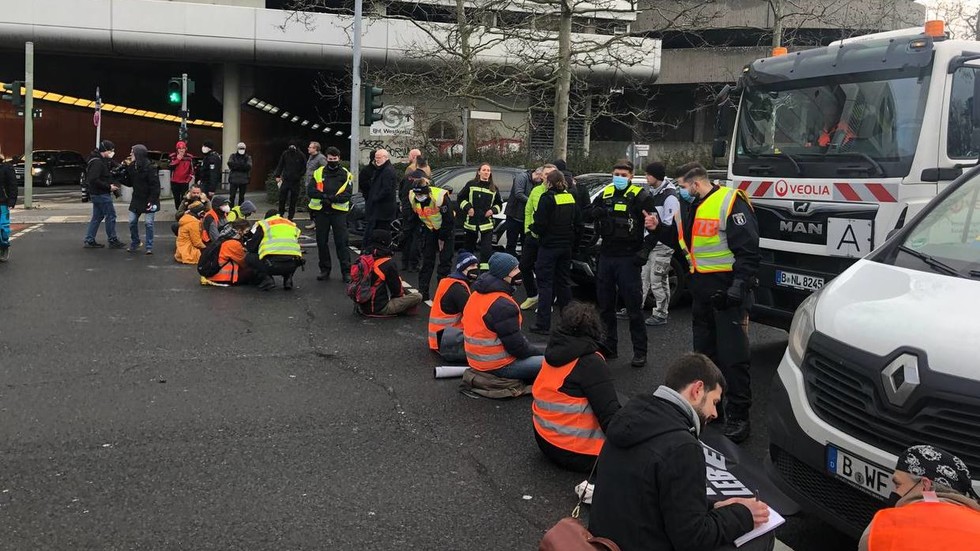 A group of 15 demonstrators disrupted rush-hour traffic on Berlin’s main highway on Monday by gluing themselves to the road. The protesters, from the group ‘Last Generation, declared the A100 a “place of nonviolent civil resistance” as they demanded a law against food waste and agriculture-related greenhouse gas emissions.

The demonstration – which also saw participants place discarded food on the highway – was part of an ongoing series of traffic blockades by the group in the capital, as well as in Hamburg and Stuttgart over the past week. In a statement, Last Generation also warned of additional protests in other German cities throughout the day.

Videos circulating on social media show a number of frustrated motorists exit their vehicles and drag the activists off the road by their hoods and backpacks. In a series of tweets, the group acknowledged that there had been “repeated calls” to stop these protests, but said it was conducting “nonviolent civil resistance to stop our government from committing crimes against humanity.”

“By planning to achieve climate neutrality by 2045, the German government breaks its constitutional obligation to protect our lives,” activist Carla Hinrichs said in a statement, according to Reuters.

“By 2030, we will exceed 1.5 degrees [average rise in global temperatures]. The government is not only breaking international law but committing a crime against humanity by deliberately heading for a world hotter by 2, 3, 4 degrees, with billions dying of hunger,” she explained.

The group claimed that 252 protesters participated in similar blockades over the past two weeks, with some 69 gluing themselves to the asphalt to make it harder to remove them. It added that 42 activists took part in motorway blockades in Berlin and in the southwestern city of Freiburg on Monday.

An unnamed police spokesperson noted that Last Generation had blocked three motorway entrances at three locations in Berlin and had mounted an unsuccessful attempt at a fourth site.

She added that the police were attempting to verify the participants’ identities and whether they need to be taken into custody, but could not state exactly how many people had been detained since the beginning of the action.

Meanwhile, Reuters reported that police in Freiburg police have launched investigations against 11 people

According to Reuters, Last Generation claimed on its website that there were 50 people in police custody in several German cities as of Friday. It requested that Berlin Police not arrest its members since they were “[defending] the constitutional order and had a duty to disobey any government that doesn’t fulfil their first and most important responsibility: protecting the people of Germany.”