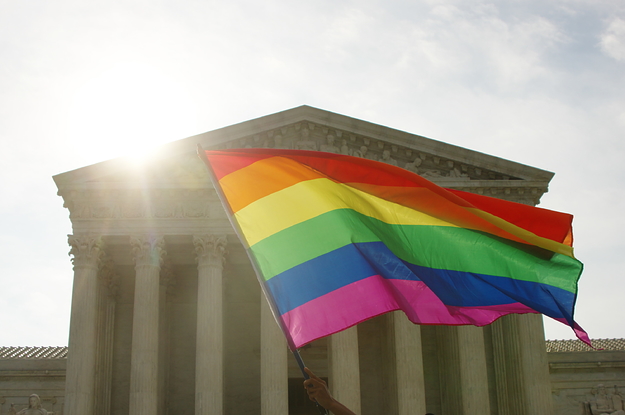 Congress Is Going To Officially Protect Same-Sex Marriage. Here’s What The Bill Does And Doesn’t Do.

The bill would act as a fail-safe should the Supreme Court’s right-wing majority do to marriage equality what they did to abortion rights.

Congress is on the verge of passing a bill that would act as a fail-safe to protect the LGBTQ community should the Supreme Court’s right-wing majority do to marriage equality what they did to abortion rights.

Currently before the Senate, the Respect for Marriage Act will give some measure of relief to activists who had feared that the top US court would reverse its own precedent on marriage equality.

“This will give millions of loving couples the certainty, the dignity, and the respect that they need and that they deserve,” Sen. Tammy Baldwin, the Wisconsin Democrat and first openly LGBTQ senator, said Wednesday when the bill came to the floor.

“None of this precludes court fights on marriage going forward,” Mary Bonauto, the civil rights project director at GLBTQ Legal Advocates & Defenders, told BuzzFeed News. “We will fight to prevent the unthinkable from happening, but this bill provides a crucial backstop requiring marriage recognition in the event that it does.”

The bill had passed a key procedural hurdle in the Senate on Wednesday when a coalition of all 50 Democrats and 12 Republicans voted to overcome any filibuster. The bipartisan group leading the push in the chamber had decided in September to delay their efforts until after the midterm elections in order to try to ease some political pressure for potential backers.

The bill was also tweaked to make clear that it doesn’t require the government to recognize polyamorous marriages while also adding protections for religious institutions — enough so that even the Mormon church expressed its support.

With Republicans set to narrowly assume control of the House of Representatives next year following this month’s midterms, the bill is likely to be one of the last bipartisan pieces of legislation that will pass in this Congress. A full vote in the Senate could happen this week. This version will still need to pass in the House of Representatives before it is sent to President Joe Biden for his signature.

All 220 Democratic members of the House were joined by 47 Republicans in passing their own version of the bill in July. One of the 157 Republicans who voted against that bill, Rep. Glenn Thompson of Pennsylvania, delivered a toast at his son’s wedding to another man just three days later.

“I am incredibly encouraged to see this bill move forward with such strong bipartisan support,” National Center for Lesbian Rights Legal Director Shannon Minter told BuzzFeed News. “Once the RMA becomes law, the LGBTQ community can breathe a sigh of relief knowing their families are secure and the Supreme Court cannot upend their lives with the stroke of a pen.” 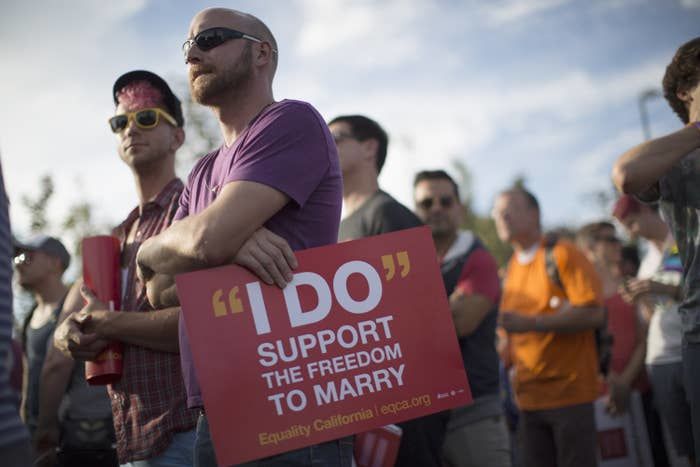 People celebrate the Supreme Court ruling on marriage for same-sex couples on June 26, 2015, in West Hollywood, California.
The US Constitution grants states — and not the federal government — the power to determine who may wed in that state. But the Supreme Court ruled 5–4 in Obergefell v. Hodges in 2015 that states banning or refusing to recognize marriages for same-sex couples violated the 14th Amendment’s equal protection and due process clauses. In 1967, the Supreme Court had also ruled state bans on interracial marriage were also unconstitutional.

But when the Supreme Court struck down Roe v. Wade this summer, overturning federal protections for abortion rights, Justice Clarence Thomas wrote a separate opinion that urged the court’s new conservative supermajority to go further in unwinding past opinions on the 14th Amendment. “We have a duty to ‘correct the error’ established in those precedents,” Thomas wrote, specifically mentioning Obergefell, among other cases.

In their dissent in the abortion case, the three liberal justices also expressly warned, “No one should be confident that this majority is done with its work.”

Jim Obergefell, the Ohio plaintiff in that case, was among those concerned that Thomas was signaling marriage equality was next on the chopping block. “I would honestly be lying if I said I weren't afraid that it could all go away,” Obergefell told BuzzFeed News in July. “It made me angry, and it has me terrified.”

LGBTQ legal campaigners also told BuzzFeed News that they were alarmed and believed that the Thomas opinion would usher in a wave of legal challenges by right-wing campaigners that could slowly work their way up to the Supreme Court. “It was clearly a threat to the rights we fought for,” said Evan Wolfson, founder of Freedom to Marry. “The threat is real.” 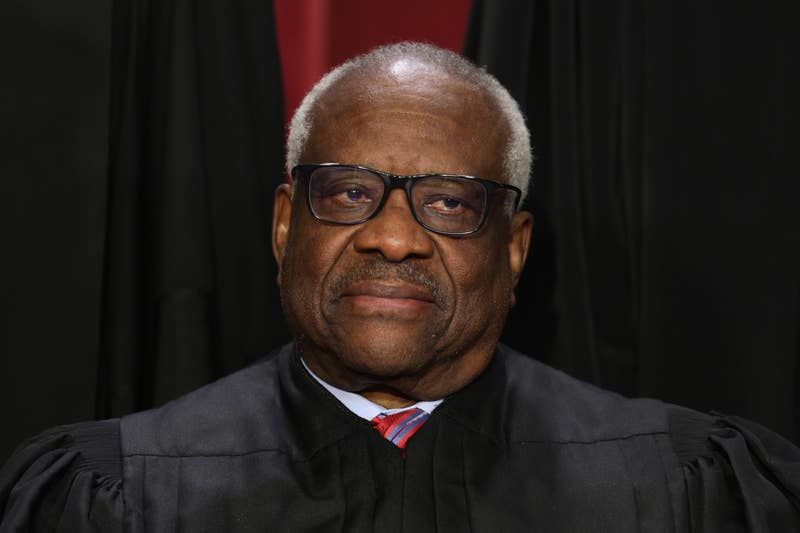 Should the Supreme Court overturn Obergefell, the patchwork of state bans for marriages of same-sex couples would suddenly came back into force, as was the case with abortion trigger laws this summer.

First introduced to Congress in 2015 prior to Obergefell, the Respect for Marriage Act won’t force states to grant marriage licenses to same-sex couples, but it would make clear that the federal government would recognize any married couple’s legal rights, benefits, or protections, even if they lived in a state that outlawed marriage between same-sex partners.

The bill would also formally repeal the Defense of Marriage Act of 1996, which had denied such federal rights and benefits in the first place. (The key section of that law was struck down in 2013 in Windsor v. US, another Supreme Court case that activists fear could be now under threat.)

“The fight for marriage equality in Congress opened with the Defense of Marriage Act in 1996, and we feel like the Respect for Marriage Act closes that chapter,” said David Stacy, government affairs director for the Human Rights Campaign.

Stacy, who previously worried that Thomas was trying to invite legal challengers to bring cases against marriage equality to the federal courts, said Congress was signaling to the court and others through this law that the issue was “settled.”

“I don’t think I can get into Justice Thomas’s head,” Stacy said. “But I hope what he takes away from this is, ‘I shouldn't have put that into decision, and I should put this idea that we're gonna revisit this out of my mind and focus on the cases coming before the court and not soliciting challenges to existing law.’”

Polls show more than 70% of Americans now support marriage equality — an inverse from the 70% who opposed when the Defense of Marriage Act first passed.

Bonauto, who was among the lawyers who argued Obergefell before the Supreme Court, pointed out that while the LGBTQ community continues to gain acceptance, there are many other political and legal threats that pose a danger, especially to transgender and nonbinary youth.

“This is a very, very hard time,” Bonauto said. “At the same time, there is a message of hope in this vote, and the long process of engagement that turned a majority against us to a majority with us.”