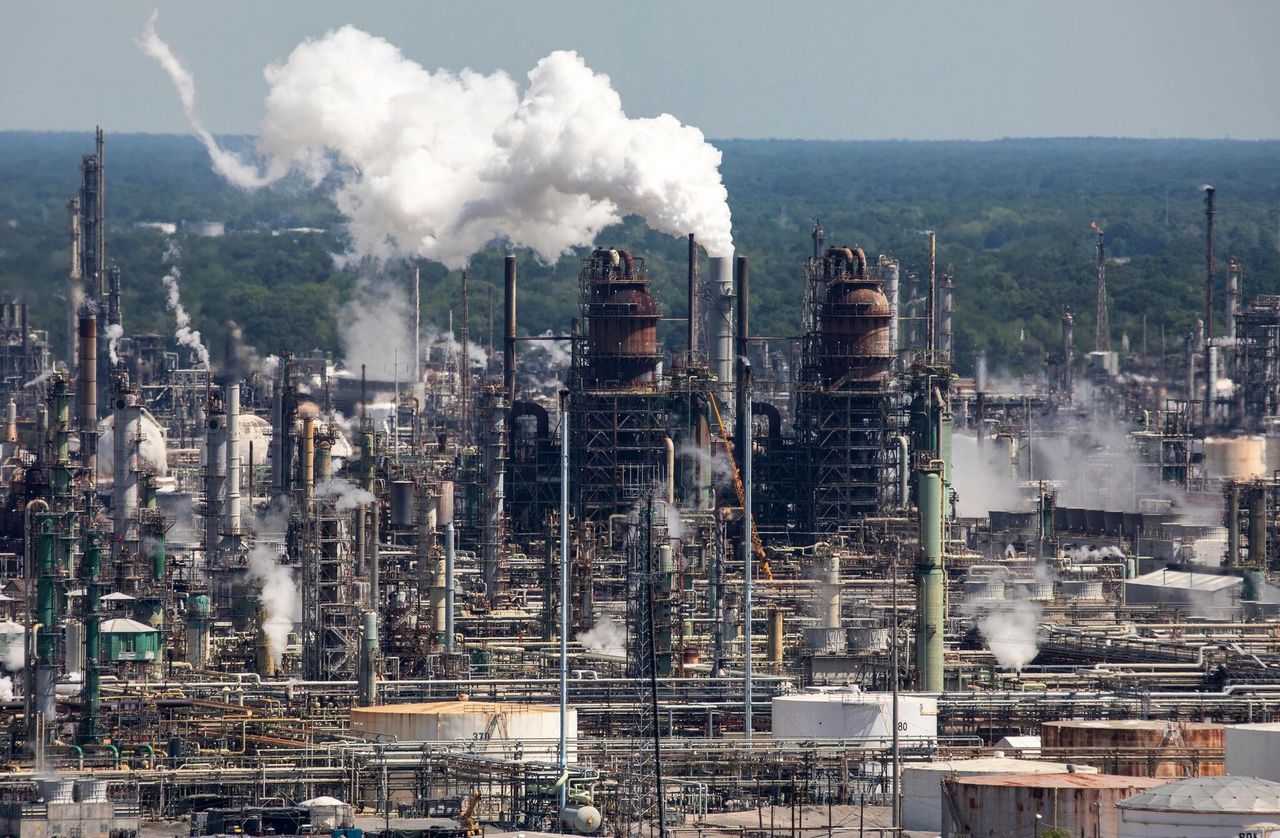 Under a draft plan Democrats are circulating, the Treasury Department would tax a handful of the biggest emitters of planet-warming pollution to pay for climate change.
Democrats in Congress want to tax Exxon, Chevron and a handful of other major oil and gas companies, saying the biggest climate polluters should pay for the floods, wildfires and other disasters that scientists have linked to the burning of fossil fuels.

The draft legislation from Senator Chris Van Hollen of Maryland directs the Treasury Department and the Environmental Protection Agency to identify the companies that released the most greenhouse gases into the atmosphere from 2000 to 2019 and assess a fee based on the amounts they emitted.

That could generate an estimated $500 billion over the next decade, according to Mr. Van Hollen. The money would pay for clean energy research and development as well as help communities face the flooding, fires and other disasters that scientists say are growing more destructive and frequent because of a warming planet.

The bill for the largest polluters could be as much as $6 billion annually spread over 10 years, according to a draft of the plan.

The proposal comes as the Senate prepares to vote on a bipartisan $1 trillion infrastructure package that includes billions of dollars to help communities prepare for and recover from extreme weather driven by climate change. Democrats hope to later pass a separate $3.5 trillion budget package that will include measures to cut carbon dioxide, methane and other greenhouse gases that result from burning fossil fuels and that are helping to drive up global temperatures.

A tax on polluting companies has the support of liberal lawmakers including Senator Bernie Sanders, the Vermont independent, as well as Senators Edward J. Markey and Elizabeth Warren of Massachusetts and Sheldon Whitehouse of Rhode Island, all Democrats.

Mr. Van Hollen says he is optimistic that his legislation will find broad support within his party and be attached to the budget reconciliation package, which Democrats hope to pass without Republican votes. But that would require all Democrats in the narrowly divided Senate to back the measure, including Joe Manchin III of West Virginia, who has routinely argued against anti-fossil fuel legislation.

While several major oil companies, the Chamber of Commerce and the American Petroleum Institute — the country’s largest oil and gas trade group — support a tax on carbon emissions, fossil fuel advocates said on Tuesday that targeting a handful of companies was unfair.

Thomas J. Pyle, president of the Institute for Energy Research, which supports the expanded use of fossil fuels, questioned the legality of Mr. Van Hollen’s tax plan.

Mr. Pyle said he was stunned by the idea of singling out individual companies to tax, adding “I can’t imagine any court of law that this would stand up in.”

Exxon Mobil and Chevron did not respond to requests for comment.

Frank Macchiarola, senior vice president of the American Petroleum Institute, declined to comment on the proposal but said in a statement that the oil and gas trade group supports “a market-based, economywide carbon price policy” to tackle climate change.

An exhaustive scientific report issued in 2018 by 13 federal agencies concluded that human activities, especially the emissions of greenhouse gases produced by power plants, factories and automobiles that run on fossil fuels, are the dominant cause of the global temperature rise.

The report concluded that extreme weather events made worse by global warming would cause hundreds of billions of dollars a year in damage in the United States alone. In 2020, the nation saw a record 22 disasters that each caused damage of at least $1 billion, according to the National Oceanic and Atmospheric Administration.

Increasingly, climate activists are making the case for redress from those most directly responsible for carbon emissions: the companies that produced them.

“These oil companies and their executives are by far the most responsible parties for the climate crisis,” said Lee Wasserman, director of the Rockefeller Family Fund, a philanthropic group that helped develop the proposed legislation.

Oil companies have accused the Rockefeller Family Fund of bankrolling a climate conspiracy by funding research that has been used in litigation against the fossil fuel industry.

If the Democratic proposal passed into law, the U.S. government would target companies responsible for at least 0.05 percent of the total carbon dioxide and methane gas emissions in the atmosphere from 2000 to 2019. That would apply to 25 to 30 companies. Aides to Mr. Van Hollen said the legislation aims to look back only as far as 2000 because older data is not considered as reliable or uniform.

To determine the biggest emitters, the government could cite a growing body of research developed by Richard Heede, a researcher at the Climate Accountability Institute, a nonprofit advocacy group. In 2014 Mr. Heede quantified the annual production of every major fossil fuel company and converted it into carbon emissions — finding just 90 companies worldwide were responsible for nearly two-thirds of all greenhouse gas emissions since the start of industrialization.

The top 20 companies are responsible for nearly 30 percent of emissions, the study found.

The list includes foreign entities like Saudi Aramco and Gazprom as well as U.S.-based companies including Exxon Mobil, Chevron and ConocoPhillips.

Under the Democrats’ plan, the tax would be applied to U.S. companies and foreign companies with American subsidiaries. Companies also would have the ability to dispute the government’s determination.

“Responsibility to pay would be based on a strict liability standard,” according to a draft of the plan. “There is no requirement to prove negligence or intentional wrongdoing. The proposal does not assign blame for specific damages — it simply ensures that these companies contribute to the solution.”

Amy M. Jaffe, managing director of the Climate Policy Lab at Tufts University’s Fletcher School, said while the proposal may raise money, she was skeptical about whether it would force a reduction in greenhouse gas emissions.

“The best way to change behavior is to regulate it,” she said. “There is no substitution for proper regulation and enforcement to end pollution.”

He likened the climate fund to the Comprehensive Environmental Response, Compensation and Liability Act, also known as Superfund, which Congress created in 1980 to force polluting companies to pay to clean up toxic sites.

Mr. Lazarus noted that chemical companies sued to block the program but failed. And, he said, “Any differences between the hazardous waste issues of the 1980s and the climate change issues of our times cut in favor of this legislation.”