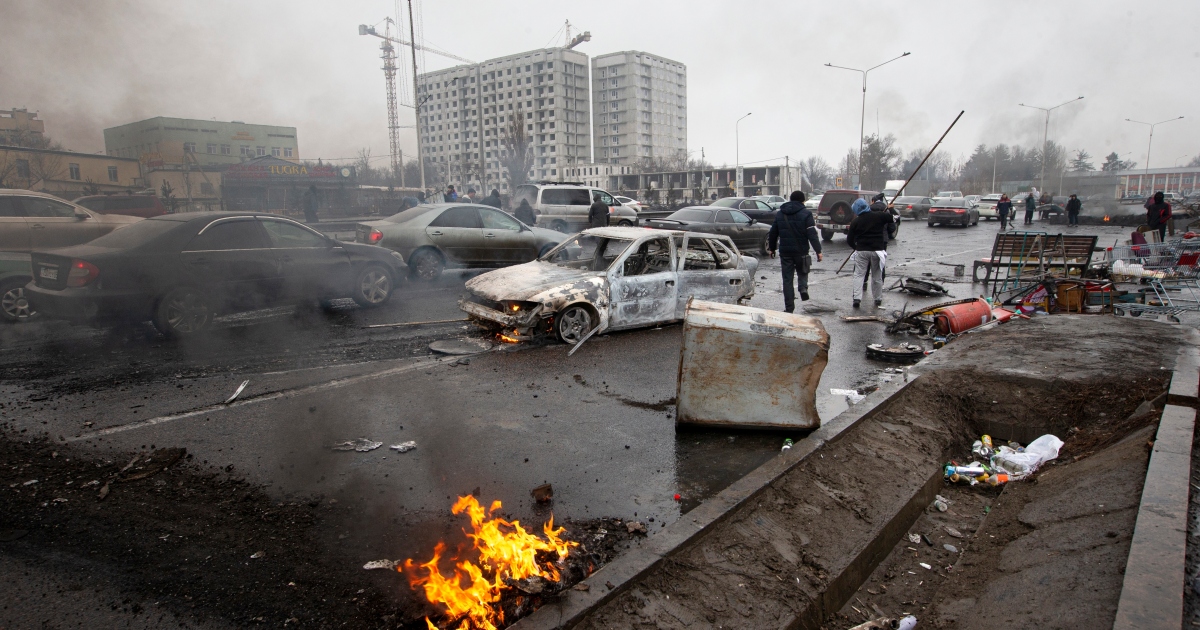 Do Kazakhstan’s protests signal an end to the Nazarbayev era?

Yevgeniy Zhovtis, a prominent activist in Almaty, explains the causes and potential effects of unprecedented unrest.

The protests and subsequent violence in Kazakhstan last week came as a surprise.

Days after hundreds of protesters rallied against rising fuel prices in a western town, Zhanaozen, demonstrations rapidly spiralled to other cities, where various socioeconomic grievances were shared.

Finally, protesters demanded an end to what they and many observers see as a corrupt political system.

President Kassym-Jomart Tokayev initially promised to lower fuel prices, then dismissed the government and removed former president Nursultan Nazarbayev, the symbol of the system, as the head of the powerful Security Council.

Despite his moves, the protests soon turned violent.

Tokayev ordered security forces to fire without warning and claimed – without providing evidence – that 20,000 foreign-trained “terrorists” had attacked the main city of Almaty.

According to official data, 8,000 people were arrested.

Dozens died, including citizens and police. The real toll could be higher, as reliable information is hard to gather in the tightly controlled former Soviet state.

In a conversation with Al Jazeera, Yevgeniy Zhovtis, an Almaty-based Kazakh human rights activist, director of the Kazakhstan International Bureau for Human Rights and Rule of Law and recipient of a number of human rights awards – including the Norwegian Helsinki Committee Andrey Sakharov Freedom Award in 2010 – talks about the current state of affairs in Kazakhstan and the politics behind the protests.

Yevgeniy Zhovtis: The situation is slowly coming back to normal. It is clear that the authorities and the security forces have taken full control over the city. Possibly in some remote parts of the city, operations against armed groups are still taking place, but in general it is now quiet, shops are gradually reopening, but banks are still closed.

On Monday, the internet was available for four hours, from 9am to 1pm. People slowly begin to leave their homes, but one can still see very few cars, a little more in the city centre. The city is not yet back to life, but it’s slowly returning to normal.

On January 5, 6 and some of the 7th, the city was in anarchy. There were almost no police and troops on the streets. There were looters, in some places people stormed police stations, it was total chaos. On the 8th, an operation started to pacify the situation.

Al Jazeera: Who were the groups that Tokayev has called “foreign-sponsored terrorists”?

Zhovtis: It is important to understand that protesters are never a unified mass. It is not that a single group or political party took to the streets. In all the regions where the protests took place, it was a mixed group of people.

First of all, traditionally, it was political opposition and civil society activists – who were peaceful. Over 30 years of independence in Kazakhstan, there were never protests that would involve burning cars and violence against the police.

The only exception were the 2011 Zhanaozen protests, where a peaceful demonstration of 1,000 oil workers ended with a provocation that led to clashes with the police and the deaths of at least 15 people.

At the time, however, no police officers were killed.

Apart from that, over all these years protests were never violent. This time, too, people who took to the streets in Zhanaozen and then in Aktau and all the other cities, were absolutely peaceful and had a certain set of demands. In the beginning, they were socioeconomic, then political demands appeared.

Kazakhstan has very strict laws when it comes to protests. It takes three days to receive permission to organise a protest, and akimiat (the local municipality) can deny permission. But most importantly, in all cities, meetings and demonstrations can only be organised in certain places. So when people go to the central square or anywhere close to administration buildings they already break the law.

Until January 4, all the protesters were peaceful. Gradually, they were joined by groups of marginalised youngsters mainly from the countryside, who are dissatisfied with their socioeconomic situation and ever-present corruption.

In Almaty, they slowly became the main group of protesters – young unemployed people from the regions expressing their frustrations against injustice. They were heavily affected by price rises and the pandemic. They distrust the authorities and the police.

The president’s statement that there were 20,000 fighters sponsored from abroad does not seem true.

Al Jazeera: Tokayev ordered security forces to shoot without warning and called Russia and the CSTO states to support Kazakhstan. What do you make of these moves, especially in the context of his more conciliatory tone earlier?

Zhovtis: Tokayev’s order to shoot without warning came only after the attacks against police stations, so there was no mass shooting of peaceful demonstrators. But an exchange of fire did take place. Now we have to find out what happened.

When it comes to foreign troops, they were not called to take part in armed operations. CSTO soldiers only protect official buildings, important strategic objects and airports, while the clean-up operations are conducted by Kazakh forces. 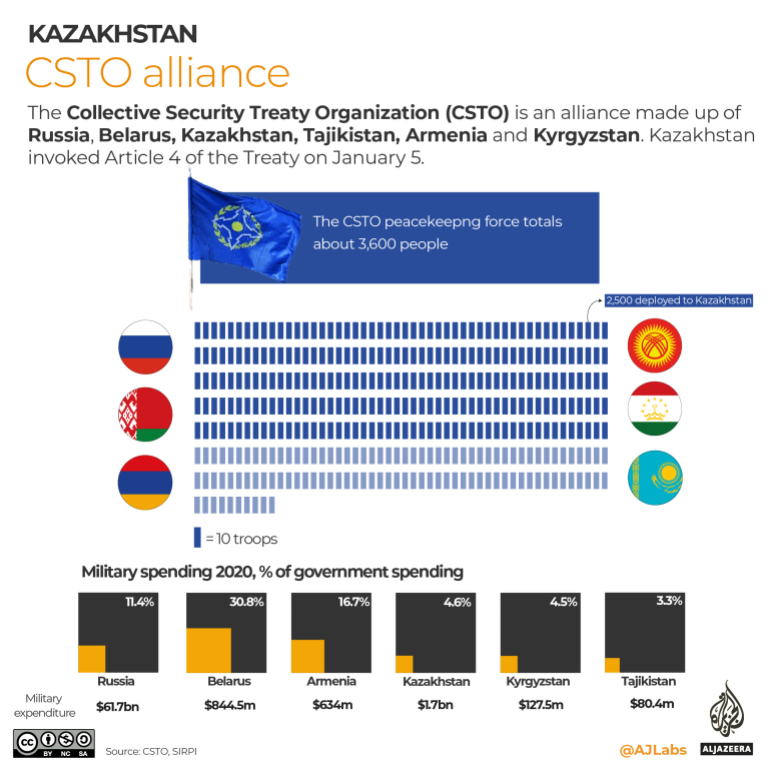 Tokayev’s decision might have been because he distrusted the loyalty and competence of some of the security structures and needed additional resources. What is more important is the political dimension of the decision, which was to demonstrate that he has resources that he can use – and that he enjoys [Russian President] Vladimir Putin’s support.

We can only assess the role of the CSTO intervention once the troops are out of the country. If they leave this or next week, there will be no reason to worry, but if they stay it will become a serious concern.

Al Jazeera: Many critics say the crisis is the result of a clash between Tokayev and former President Nursultan Nazarbayev, who handpicked Tokayev as his successor. What do you think?

They have seen Tokayev’s strengthening position as a threat to their interests. But we have to remember that apart from that, there were peaceful protests which had nothing to do with this power struggle and which are rooted in socioeconomic problems, social dissatisfaction and corruption.

Clearly, the situation has strengthened Tokayev.

He is now placing his people in power positions and he has become the head of the Security Council, so in a way, it is the end of Nazarbayev’s era.

It does not mean, however, that the former president will leave or face trial, or that his close associates will be sidelined and lose their economic and political power. It only means that in general, the system that existed for the past 30 years is slowly coming to an end.

It is hard to say what will happen next, but it is clear that Tokayev is becoming an independent and strong figure.

Al Jazeera: Did you see this coming? Many saw Tokayev as Nazarbayev’s puppet …

Zhovtis: Last year, I said that that the corrupt regime and the existing socioeconomic problems need serious reforms. What you are seeing is a backlash against all the problems that have not been solved over the years.

The injustice in resource distribution, the unsolved problems of the Kazakh-speaking population in the regions, corruption and oligarchy. It was clear that sooner or later Tokayev will have to break with the system that Nazarbayev had built.

Whether he can do that is another question. The past two years have shown that the system is resisting any change because it continues functioning according to the rules set up by Nazarbayev.

Recent events can be understood as a call for change. At the same time, the situation might be exploited by hardliners and the conflicted elite.

Al Jazeera: One of the main slogans of the protest was “Old men should go” …

Zhovtis: Of course, the old elite should go. In many ministries, generational change is already taking place, new people are appointed to important posts.

But deeper reforms are necessary because the system is incapable to solve existing socioeconomic problems, fight corruption, oligarchy and redistribute resources.

What worries me most is that the authorities might now start putting pressure on civil society, human rights activists, journalists and the political opposition. If the government now starts quelling the independent voices, it will only become more authoritarian.