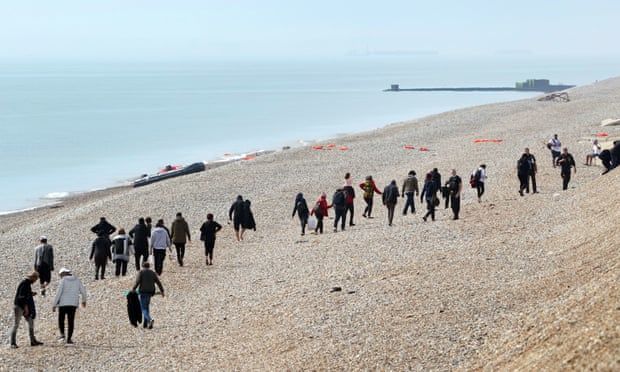 Exclusive: Critical defence select committee report to come amid growing Tory unease over No 10’s plan
The credibility of the government’s plan to put the Royal Navy in charge of coordinating efforts to control small boats in the Channel is expected to be questioned by an influential parliamentary committee.

A report by the defence select committee, to be delivered shortly, will raise doubts over whether plans to put the Royal Navy in charge have been rigorously tested.

It comes amid growing unease among Tory backbenchers over the government’s plans to deal with the rising number of people arriving in the UK via small boats.

Border Force officers are preparing for a fresh wave of arrivals from across the Channel amid increased pressure on the UK’s asylum system from people escaping the war in Ukraine.

Last year, 28,431 people crossed the Channel in small boats – three times the number in 2020 – and Border Force unions have claimed that up to 60,000 could arrive this year.

The committee will meet soon to finalise its report into Operation Isotrope, the plan to involve the armed forces in countering Channel crossings.

John Spellar, the Labour vice-chair of the committee and a former defence minister, said the policy had not been thought through.

“This is a PR-driven policy which is without any coherent detail, but also poses significant difficulties and has the real risk of reputational damage for the [Ministry of Defence] and the Royal Navy.

“The government has to get a coherent policy out of the Home Office in order to deal with this major crisis,” he said.

In mid-January, it was announced that the military was to be put in charge of stemming the surge in people crossing the Channel in small boats and could take charge of controversial “pushback” tactics to turn away boats at sea.

James Heappey, the armed forces minister, told MPs that the MoD would take over command of the operation from Border Force, and would coordinate the many government departments involved, while the money would come from each organisation’s existing budget.

“Clearly this will be a multi-agency effort under Royal Navy command. Where agencies are already doing things in the Channel, they will continue to be funded by the departments that own them,” he said in reply to an urgent question.

Witnesses to the committee questioned whether this would work. Former Border Force chief V Adm Sir Charles Montgomery told the committee he remained confused over the Royal Navy’s leadership role.

“It does seem to me that the home secretary has not lost her responsibilities for border security and immigration control, and yet there is an important chunk that now sits in a different government department and, as I could understand from the urgent question, a different secretary of state. There is a misalignment there, which I do not quite understand,” he said.

Another witness, the former Royal Navy officer Cdr Tom Sharpe, said: “Arriving in Dover full of migrants and with a white ensign on the back is reputational damage to the Royal Navy.”

The decision to ask the Royal Navy to intervene was widely seen to be part of “Operation Red Meat” – policies designed to save Johnson’s premiership after allegations around parties in No 10 and Whitehall during the Covid-19 lockdown.

A beleaguered No 10 indicated that the navy would soon be given the lead responsibility for dealing with refugees crossing the Channel by boat, stripping the responsibility from the home secretary, Priti Patel, and the Home Office.

At the time, a defence source said they believed that one of the immediate tasks would be to restore safety to the waters around Britain after 27 people, mostly from the Kurdish region of Iraq, died in November attempting to reach the UK.

A government spokesperson said that they could not comment on internal discussions with other departments on funding.

“The Home Office and Ministry of Defence continue to pursue all options to prevent illegal crossings, secure our border and protect life at sea. To suggest otherwise is wrong,” he said.
#Priti Patel  #COVID-19  #Johnson  #Covid