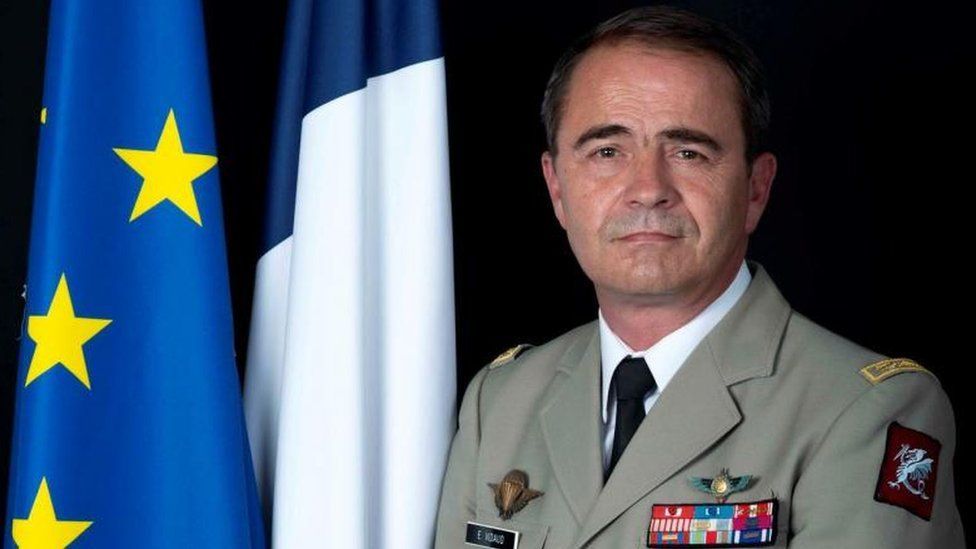 The head of French military intelligence, Gen Eric Vidaud, is losing his job after failing to predict Russia's war in Ukraine, reports say.
Seven months after he took on the role, one report said he was blamed for "inadequate briefings" and a "lack of mastery of subjects".

The US correctly assessed that Russia was planning a large-scale invasion, while France concluded it was unlikely.

Gen Vidaud was blamed for that by France's military chief, a source said.

However, the military source told AFP news agency that his job was to provide "military intelligence on operations, not on premeditation". As Gen Vidaud's service concluded that Russia had the means to invade Ukraine, the source said that "what happened proves him right".

When contacted by the BBC, a military spokesman said French armed forces chief Gen Thierry Burkhard had no comment to make.

However, in early March Gen Burkhard acknowledged that French intelligence had not been up to the level of US or UK briefings, which were publicised to pile pressure on Russia's Vladimir Putin. "The Americans said that the Russians were going to attack, they were right," he told Le Monde newspaper.

"Our services thought instead that the cost of conquering Ukraine would have been monstrous and the Russians had other options" to bring down the government of Ukraine's Volodymyr Zelensky, he added.

France's misreading of President Putin was all the more embarrassing because President Emmanuel Macron had spoken to him regularly in the days leading up to the invasion on 24 February.

Intelligence specialist Prof Alexandre Papaemmanuel told AFP it was too easy to blame military intelligence for the failure, which lay with France's entire intelligence community.

But Gen Vidaud, France's former special forces commander, appears to have been squeezed out for other reasons too.

Weeks after he took charge of military intelligence, his service came in for criticism when Australia scrapped a multi-billion dollar submarine contract with France in favour of a security pact with the US and UK. The Aukus pact came out of the blue in France and prompted a diplomatic spat.