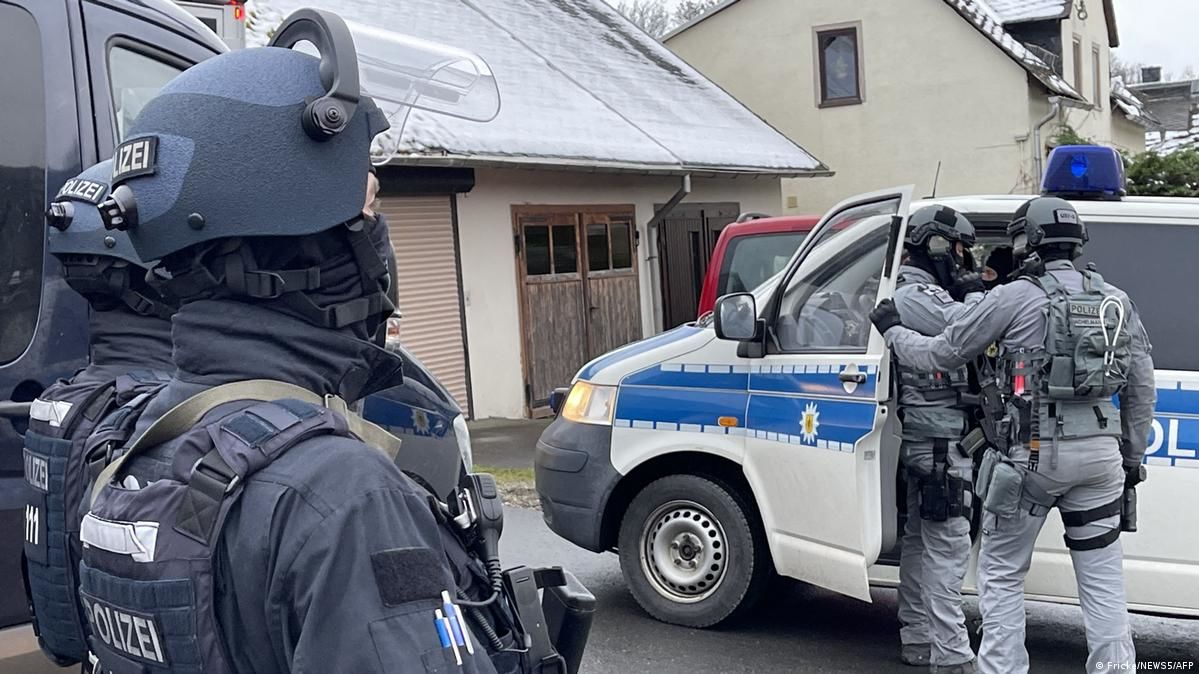 Police have arrested 25 suspected members or supporters of a "domestic terrorist organization" aiming to topple the German state. Justice Minister Marco Buschmann said the network was part of the "Reichsbürger scene."

In a nationwide raid, 25 suspected members and supporters of a terrorist organization were arrested early Wednesday.

Officials said the network, part of a wider right-wing movement, was already well established with a concrete plan to overthrow the German state by force and install a new government.

What we know so far

The raids were announced by Germany's federal prosecution agency and German Justice Minister Marco Buschmann. Buschmann said the investigations were directed against a suspected terrorist network with known ties to the Reichsbürger movement. He said that the raids had taken place on individuals suspected of planning an armed attack on state institutions.

"Since this morning a large anti-terror operation is taking place. The Federal Public Prosecutor General is investigating a suspected terror network from the Reichsbürger scene," Buschmann wrote. "The suspicion exists that an armed attack on constitutional organs was planned."

The search operation is reported to have covered 130 properties belonging to 52 suspects in 11 German states.

According to prosecution officials, the arrested suspects "belong to a terrorist organization founded by the end of November 2021 at the latest, which has set itself the goal of overcoming the existing state order in Germany and replacing it with its own form of state, which has already been worked out in outline."

Of the 25 men and women arrested, 24 were from Germany and one suspected supporter is from Russia. One arrest took place in Austria and one in Italy. There are 27 other suspects, the federal prosecutor's office said.

Prosecutors identified the suspected ringleaders only as Heinrich XIII P. R. and Ruediger v. P., in line with German privacy rules. The news magazine Der Spiegel reported that the former was a well-known 71-year-old member of a minor German noble family, while the latter was a 69-year-old former paratrooper.

According to prosecutors, P. R., who the group planned to install as the new leader of Germany, had made contact with Russian officials seeking to establish a new order in Germany once the Berlin government was overthrown. A Russian woman, Vitalia B, had allegedly given him help with this. The Russian embassy in Berlin denied having links to far-right terror groups.

A currently-serving soldier in the Bundeswehr's Special Forces Command (KSK) as well as several Bundeswehr reservists are also among suspects in the case, a spokesperson for Germany's Military Counterintelligence Service (MAD) told the DPA news agency. A search was reported to have been carried out at the soldier's home and his barracks office in the state of Baden-Württemberg.

The trigger for the raids was an investigation into another Reichsbürger group that had planned to kidnap German Health Minister Karl Lauterbach.

"The investigations provide a glimpse into the abyss of a terrorist threat from the Reichsbürger scene," Faeser said in a statement. "We know how to defend ourselves with all our might against the enemies of democracy," she added.

The president of the German parliament's lower house, Bärbel Bas, said the operation shows "that our democratic constitutional state is attentive and capable of action."


The group had targeted members of the Bundeswehr and police in a bid to achieve their goals. It had formed a "military arm" and a council presided over by Heinrich XIII P. R.

Speaking at a press conference,  German Attorney General Peter Frank said that the organization had formed around P. R. at the end of November 2021.

Frank said the group had established a council that was intended to act as the government of the new state with some individuals already designated for ministerial roles. Among them, said the attorney general, was a former member of the Bundestag who was to take over the justice portfolio.

To implement their plans the group's members were prepared to use military means and violence against state representatives and were willing to kill to achieve their goals. According to the investigators, the members of the group "followed a conglomerate of conspiracy myths consisting of narratives of the so-called 'Reichsbürger' as well as QAnon ideology."

The prosecutors added that the group's adherents believe Germany is ruled by a so-called "deep state," similar to baseless claims about the United States that were made by former President Donald Trump.

The Reichsbürger movement is made up of a number of small organizations and individuals, mainly in the states of Brandenburg, Mecklenburg-Western Pomerania and Bavaria. They do not accept the legality of the Federal Republic of Germany or any of its government authorities.

The movement argues that the German constitution prior to World War II was never properly nullified and that the formation of the former West Germany in 1949, and now reunified Germany, was therefore never valid.
#Donald Trump