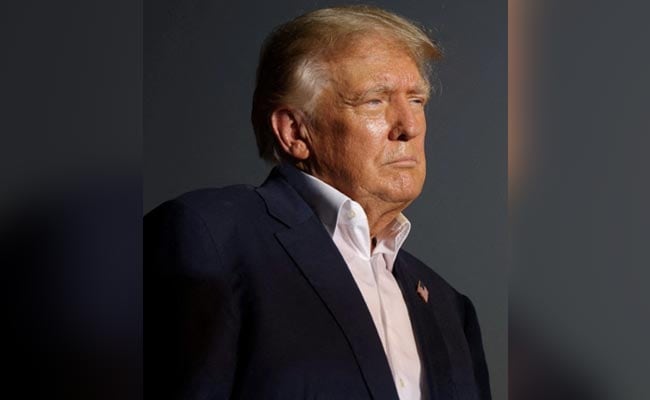 The one-term president has hinted for almost two years a potential third tilt at the White House after losing to Joe Biden.

Donald Trump is planning to ride a wave of Republican victories in next week's midterm elections by announcing a run for the presidency, US media reported Friday, as Democrats braced for a punishing night even in the most liberal corners of America.

The one-term president has hinted for almost two years a potential third tilt at the White House after losing to Joe Biden, but aides are firming up plans for an announcement on November 14, according to Axios.

Trump sent his clearest signal yet that he intends to announce his 2024 candidacy soon, as he addressed a rally Thursday in Iowa, the first state to hold its Republican nominating contest in presidential elections.
"In order to make our country

Trump's remarks came with polling pointing to a re-emerging "red wave" that will likely see the tycoon's party dismantling the Democrats' razor-thin majority in the House and possibly retaking the Senate.

Republicans are confident they can flip the one state they need for the upper chamber and are expecting gains in the House of 12 to 25 seats, easily enough to overcome the Democrats' eight-member advantage.

The final weeks of the campaign have seen bullish Republicans even looking beyond the country's swing states to Democratic bastions that once looked out of reach.

Strategists from both parties are seeing districts across New York, Oregon and Connecticut that went for Biden by double digits in 2020 coming back into play.

With Democrats being dragged down by Biden's underwater approval ratings, particularly on inflation, the president was due to pitch his party as the choice for growth and innovation at a tour of a San Diego communications company later Friday.

Ahead of the visit, Biden hailed new figures for October showing the economy adding 261,000 jobs and unemployment at low levels.

"I've got a plan to bring costs down, especially for health care, energy, and other everyday expenses... The Republican plan is very different," he said in a statement.

In one glimmer of hope for the Democrats, Oprah Winfrey endorsed Pennsylvania Senate candidate John Fetterman during a virtual get-out-the-vote event Thursday.

It was a notable snub of Fetterman's Republican rival, celebrity surgeon Mehmet Oz, who rose to fame largely through appearances on Winfrey's show.

But with the Republicans confident of flipping Georgia and Nevada, the Keystone State might not even be needed for a takeover of the Senate.

Trump had initially considered announcing before next Tuesday to get ahead of the field in the Republican primary.

But he was persuaded by close ally Kellyanne Conway that the move would leave him open to blame in the event of a bad night for Republicans.

The strategist, who ran Trump's 2016 campaign and served as a top advisor in his administration, said Thursday at a campaign event he could be expected to "announce soon."

Trump spokesman Taylor Budowich told AFP he was "not commenting on the never-ending media speculation and rumors" about a Trump return to the Oval Office.

"As President Trump has said, Americans should go vote up and down the ballot for Republicans, and he will continue that message tomorrow night in Pennsylvania," he added.