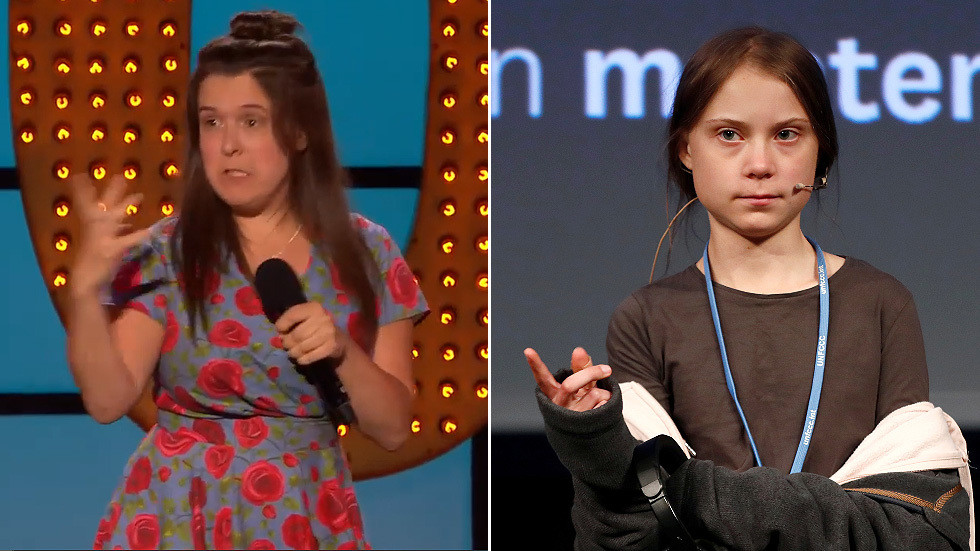 British comedian Rosie Jones has provoked a mass clutching of pearls on Twitter after she took aim at media’s most sacred cow, Swedish climate activist Greta Thunberg, with an X-rated joke during a TV show.

Appearing on Channel 4’s ‘The Last Leg’ on New Year’s Eve, Jones was asked what she thought of the 16-year-old campaigner, who was named Time Magazine’s ‘Person of the Year’ for 2019.

“I think Greta’s amazing and what she’s doing is brilliant,” the disabled comedian said. “But don’t do it now.”

While the joke sent the studio audience into fits of laughter, some viewers instantly took to Twitter to complain. “What example are we setting to young people making a change if we allow jokes like that to be aired?!” activist and BBC contributor Mandy Rose Jones opined.

Massive fucking yikes on the Last Leg of the Year for some "comedian" suggesting Greta Thunberg should be getting fingered and drinking Lambrini.@Channel4, are you serious?

Amid scores of outraged comments, some viewers chimed in to defend Jones. “Good on Rosie Jones,” one wrote. “Given the scale of what both propose & the societal upheaval (not excluding violence) that both advocate to bring it about, no reason why Thunberg should be insulated from criticism, interrogation & mockery, any more than radical Islam should.”

Despite what the online outrage would suggest, Jones’ gag was relatively tame, as far as British comedy goes. Glaswegian funnyman Frankie Boyle, for example, has built a career on pushing boundaries, entertaining sellout crowds with jokes about rape and pedophilia. Back in 2012, Boyle faced cries of ‘Ban this filth’ for joking that ‘Maddie,’ the first name of missing child Madeleine McCann, is an anagram of “I’m dead.”

Boyle told his critics “you can’t argue with a joke – it’s like telling a clown their car won’t pass its MOT.”