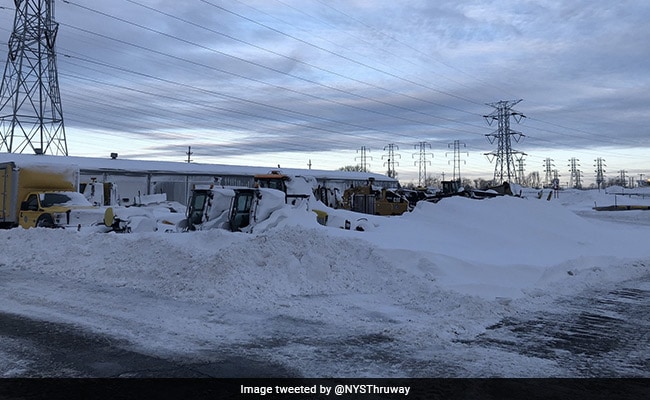 The extreme weather forced the cancellation of more than 15,000 flights in recent days including more than 1,700 on Monday.
Emergency crews in New York were scrambling Monday to rescue marooned residents from what authorities called the "blizzard of the century," a relentless storm that has left nearly 50 people dead across the United States and caused Christmas travel chaos.

Blizzard conditions persist in parts of the US Northeast, the stubborn remnants of a massive sprawl of extreme weather that gripped the country over several days, causing widespread power outages, travel delays and at least 49 deaths across nine states, according to official figures.

In New York state, authorities have described ferocious conditions, particularly in Buffalo, with hours-long whiteouts, bodies being discovered in vehicles and under snow banks, and emergency personnel going "car to car" searching for more motorists -- alive or dead.

The perfect storm of fierce snow squalls, howling wind and sub-zero temperatures forced the cancellation of more than 15,000 US flights in recent days, including over 3,800 on Monday, according to tracking site Flightaware.com.

Buffalo -- a city in Erie County that is no stranger to foul winter weather -- is the epicenter of the crisis, buried under staggering amounts of snow.

"Certainly it is the blizzard of the century," New York Governor Kathy Hochul told reporters, adding it was "way too early to say this is at its completion."

Later Monday, Hochul spoke with President Joe Biden, who offered "the full force of the federal government" to support New York state, and said he and First Lady Jill Biden were praying for those who lost loved ones in the storm, according to a White House statement.

The National Weather Service forecast up to 14 more inches Monday in addition to the several feet that have already left the city buried in snow, with officials struggling to get emergency services back online.

Erie County executive Mark Poloncarz tweeted Monday afternoon that the blizzard-related death count had climbed to 27 across the county, including 14 people who were found outside and three who were discovered in a car.

Speaking at a press conference earlier in the day, Poloncarz said Erie's death count would likely surpass that of Buffalo's infamous blizzard of 1977, when nearly 30 people died.

With more snow forecast and most of Buffalo "impassable," he joined Hochul in warning residents to bunker down and stay in place.


National Guard members and other teams have rescued hundreds of people from snow-covered cars and homes without electricity, but authorities have said more people remain trapped.

Erie County Sheriff John Garcia called the storm "the worst" he has ever seen, with periods of zero visibility and authorities unable to respond to emergency calls.

"It was gut-wrenching when you're getting calls where families are with their kids and they're saying they're freezing," he told CNN.

Hochul, a native of Buffalo, said she was stunned by what she saw during a reconnaissance tour of the city.

"It is (like) going to a war zone, and the vehicles along the sides of the roads are shocking," Hochul said, describing eight-foot (2.4-meter) drifts against homes as well as snow plows and rescue vehicles "buried" in snow.

"This is a war with mother nature," she said.

The extreme weather sent temperatures to below freezing in all 48 contiguous US states over the weekend, including in Texas communities along the Mexico border where some newly arriving migrants have struggled to find shelter.

At one point on Saturday, nearly 1.7 million customers were without electricity in the biting cold, according to tracker poweroutage.us.

That number has dropped substantially, although there were still some 50,000 without power mid-day Monday on the US east coast.

Due to frozen electric substations, some Erie County residents were not expected to regain power until Tuesday, with one substation reportedly buried under 18 feet of snow, a senior county official said.

Buffalo's international airport remains closed until Tuesday and a driving ban remained in effect for the city and much of Erie County.

Road ice and whiteout conditions also led to the temporary closure of some of the nation's busiest transport routes, including part of the cross-country Interstate 70 highway.

Drivers were being warned not to take to the roads -- even as the nation reached what is usually its busiest time of year for travel.
#Joe Biden