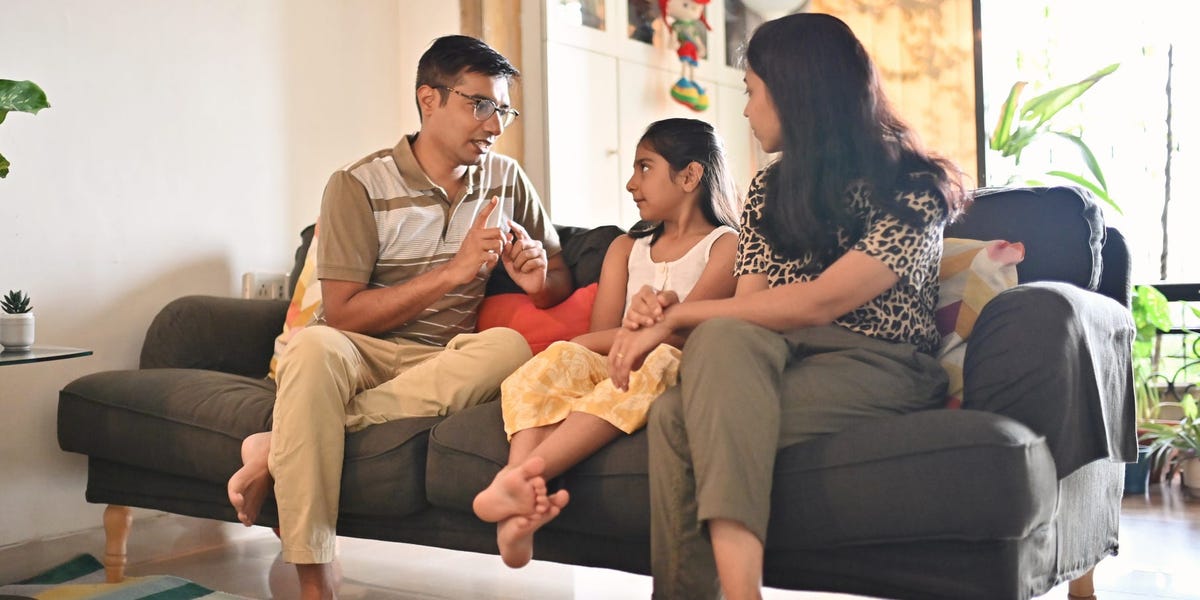 Instead of spending a fortune on holiday gifts and experiences, take your children to volunteer. It will help kickstart an important conversation.

Earlier this year, 8-year-old Frances, was trying to persuade her mom to let her go to a summer camp popular amongst her classmates. When her mom, Jennifer Gee, said no, Frances burst out: "Why are we so poor?!"

The Toronto mom of two was shocked. Gee had grown up with a single mom and without a lot of money. How could Frances think they were poor? Gee and her partner own a home, they have food on the table, and they had even planned to take Frances and her brother to a drive-through Christmas lights experience for the holidays!

The camp that caused this outburst costs $4,000 a week. Though Frances, whose name has been changed to protect her privacy, attends a French public school in Toronto, it's in an affluent neighborhood, where Gee says half the kids have nannies.

Gee and her family don't live in this affluent neighborhood, but are zoned for that French public school. Gee is a school chaplain. Her partner lost his job during the pandemic, and hasn't found the same kind of secure job to replace it.

"We don't have a nanny, but that doesn't mean that we're poor. There's something in the middle," Gee says. "[Frances] sees the disparity in some cases between what we're able to afford and what her friends' parents are able to afford."

Gee knew she needed to start talking to Frances about money and class, even if Frances is only 8.

Talk about money at the grocery store

Though 83% of American parents believe it's their responsibility to talk to their kids about money, 31% of them never do it.

Parents often feel that money conversations are awkward, scary, and can seem "too adult" for kids — especially ones in elementary school, according to Ed Grocholski, chief marketing officer at Junior Achievement USA, an organization that teaches financial literacy, entrepreneurship, and work readiness. But kids don't necessarily feel the same.

"With inflation, some of the research we've done is that rising prices are top-of-mind for kids," Grocholski says.

He recommends that parents start talking about money when kids bring it up. Though asking to go to $4,000 camps isn't the norm, money does come up when grocery shopping or buying gifts for the holidays.

Gee is doing just this. She started showing Frances the family's grocery bill every week to show her how much things cost. When Frances saw the $135 grocery bill, she couldn't believe how high the amount was!

I, on the other hand, couldn't believe how low the amount was! A Canadian family of four typically spends $287 a week on groceries.

Gee says she has always been an avid couponer and price matcher, which is how she keeps her bill so low. She even showed Frances where she used coupons to save money (which also helps Frances with her math skills).

"I grew up with that scarcity mentality I don't want my kids to have," Gee says. "But we are also hoping that this teaches her that money is finite."

Parents face pressure to give their kids holiday 'experiences'

During the height of the pandemic, 23% of parents with kids under 18 felt the need to overspend to give their children the best holidays.

According to Gee, this feeling hasn't gone away.

She says that the holidays now aren't just presents and sitting on Santa's lap for a quick photo — they're filled with "experiences." Drive-through holiday light displays are popular these days, which cost around $30 per car. Toronto malls offer "Santa experiences," where kids take their classic Santa photo, but also get to make a gingerbread house and write a letter to the North Pole. These cost between $20 to $45.

"You're mindful that saving money for you is also potentially taking away an experience for your kids," Gee says.

Volunteering can be the antidote to holiday spending pressure

Between the holiday experiences and the presents, it all adds up. Many parents know they can't afford it anymore.

Gee says she's noticed an openness around money between parents in the past six months. Parents she barely knows are talking to her in the school parking lot and at activities about how the price of keeping their kids busy is getting to be too much.

Geleen Donovan, Family Promise of Union County's executive director, recommends that parents replace these activities with volunteering. Family Promise's mission is to end and prevent homelessness. Donovan works with many volunteers to help these families who are in poverty. She sees a major perspective shift in kids when they start to volunteer.

"The volunteer activity will cost nothing and will bring so much reward," Donovan says. "I really think it's a good antidote."

Donovan believes in practicing "radical compassion." She thinks that volunteering will help parents and kids see how well off they truly are — even if they can't afford every holiday activity.

Gee has been setting this type of example for Frances. As a school chaplain, she's in charge of raising the funds to buy gift cards for 40 low-income families for Christmas. Now that Frances knows what their family spends on groceries every week, Gee asks her to help figure out how much they need to feed 40 families.

Once again, Frances is aghast at the thousands of dollars it costs to feed people. Gee says she's starting to see the concept of money and privilege click for Frances. It's been helpful for her as a parent, too.

"You remind yourself that it doesn't actually matter," Gee says. "They'll be fine without the gingerbread house with Santa."