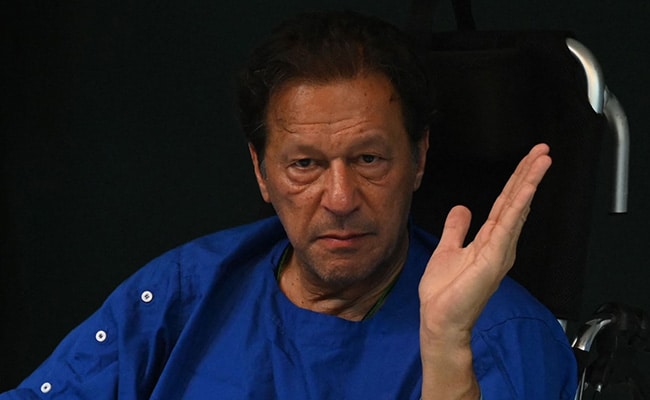 Imran Khan, 70, suffered a bullet injury in the right leg when two gunmen fired a volley of bullets at him.
Reacting sharply to Imran Khan's allegation that one of its senior officers was among the three people involved in a plot to kill him, the Pakistan Army has dismissed the ousted premier's remarks as "absolutely unacceptable" and vowed to jealously protect its personnel "no matter what".

The Army's terse overnight statement came in response to an address by Khan from the hospital in which he alleged that Prime Minister Shehbaz Sharif, Interior Minister Rana Sanaullah and Major General Faisal Naseer were part of a sinister plot to assassinate him in the same way as former Punjab governor Salman Taseer was killed in 2011 by a religious extremist.

Khan, 70, suffered a bullet injury in the right leg when two gunmen fired a volley of bullets at him in the Wazirabad area of Punjab province, where he was leading a protest march against the Shehbaz Sharif government.

"Four people plotted to kill me. I made a video and named those people and have stashed it abroad," Khan, the chairman of Pakistan Tehreek-e-Insaf said, adding that it would be released in case something untoward happens to him.

No one will be allowed to defame the institution or its soldiers with impunity. Keeping this in view, the government of Pakistan has been requested to investigate the matter.

The statement also urged the government to initiate legal action against those responsible for defamation and false accusations against the institution and its officials without any evidence whatsoever, it said.

"If the honour, safety and prestige of its rank and file are being tarnished by vested interests through frivolous allegations, the institution will jealously safeguard its officers and soldiers no matter what," the statement issued by the Inter-Services Public Relations, the media wing of the military, said.

The powerful Army, which has ruled the coup-prone country for more than half of its 75-plus years of existence, has hitherto wielded considerable power in the matters of security and foreign policy.

Earlier, Khan repeated the names of three persons for their alleged involvement in the attack. He urged his followers to continue protests across the country until the three of them resigned.

Meanwhile, Prime Minister Sharif on Saturday urged Chief Justice of Pakistan Umar Ata Bandial to form a full court commission to investigate Khan's allegation of his involvement in the attack.

"I think that this time there should be an immediate decision on the basis of justice. I request the chief justice to form a full court commission with all honourable and respectable judges for the greater interest of this country and to end this discord and chaos," he said during a press conference in Lahore.

"I will immediately, via a letter in writing, request this and I hope this request will be supported in favour of people. And if you do not accept this request then these questions will remain forever. This fitna (mischief) and sazish (conspiracy) will be buried only when facts come to light," he said.

"Why did he not go to any hospital nearby after being hit by four bullets and wasted three precious hours to reach Lahore?" she asked.

The former prime minister was taken to Khan's Shaukat Khanum Hospital in Lahore, around 123km southwest of Wazirabad, where he was shot.

She also questioned why no government doctors and police were allowed to check or visit Khan.

Khan has announced that he would relaunch the protest march against the government soon after getting on his feet.

Meanwhile, he also claimed that an FIR was not being registered as some people were afraid of (some names).

The Dawn newspaper reported that the deadlock over the registration of the FIR continued following the reported refusal by the PTI chief to withdraw the name of Major General Naseer from the complaint, which also carries the names of the prime minister and the interior minister.

Khan, who was ousted as prime minister in April this year after a no-confidence motion was passed in the National Assembly, is seeking fresh general elections in Pakistan. However, the federal government led by Prime Minister Shehbaz is opposed to holding elections now. The term of the current National Assembly will end in August 2023.