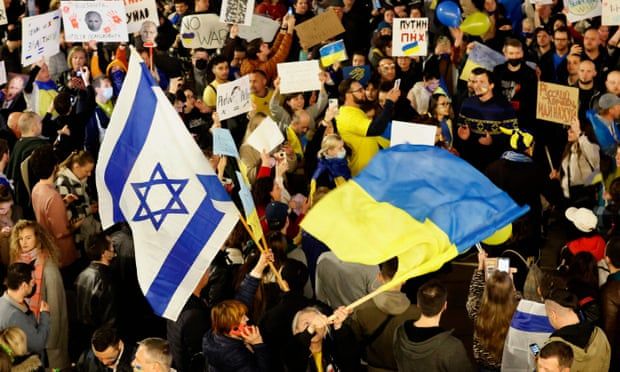 Israel tries to balance backing for Ukrainians and not offending Russia

A week ago the sight was unthinkable: a memorial at the site of one of the worst massacres of the Holocaust, engulfed in smoke and flame from an airstrike.

Yet on Tuesday a Russian attack near the Babyn Yar memorial complex in the Ukrainian capital, Kyiv, achieved exactly that. Five people died in the strike targeting the television broadcast tower next door, while firefighters battled to extinguish a fire caused by the explosion in a building inside the Jewish cemetery.

Events in Ukraine since Vladimir Putin announced his invasion six days ago are grim echoes of the atrocities committed on European soil in the 20th century: desperate people squeezing on to trains out of cities; refugees lining up on the border; families separated as able-bodied men stay behind to fight.

But government officials in Israel – a country that rose from the ashes of the second world war – have not directly condemned Moscow for the attack on Babyn Yar, and criticism of the invasion itself has been muted.

Such is the balancing act Israel finds itself performing as war once again rages on the edge of Europe. On one hand it must stand with its western allies, support Ukraine’s Jewish president, Volodymyr Zelenskiy, and help the country’s Jewish population to escape new horrors. But on the other, Israel is loth to antagonise Russia, on which it relies to facilitate its military operations next door in Syria. Action of any kind could also stir up antisemitism against Ukraine and Russia’s large Jewish communities.

Yad Vashem, Israel’s Holocaust museum, has even found itself in the peculiar position of writing to the US ambassador to ask the US not to impose sanctions on the Israeli-Russian billionaire Roman Abramovich, who is a major donor to Jewish institutions – and a longtime supporter of Putin.

The former prime minister Ehud Olmert has suggested Israel’s position on Ukraine is implicitly compromised by its occupation of the Palestinian territories. And the country’s belated decision to vote in favour of a UN condemnation of Russia’s actions and to hold off on sanctions was met with disappointment from its US allies, coming “too little, too late,” according to a senior Israeli official who spoke to the Israeli daily Yedioth Ahronoth.

“Countries that have far more to lose have taken a clear stance. Only Israel, which is always good at reminding others about how they failed to stand by the Jewish people during dark times, has done everything not to do anything,” the source said.

In the same call, Zelenskiy reportedly also asked Israel to mediate in the crisis – an appeal that appears to have borne more fruit, since Bennett made an offer to do so in a conversation with Putin two days later.

On Wednesday Putin and Bennett spoke by telephone in a call initiated by Israel’s government, the Kremlin said.

But even as Israelis with Ukrainian heritage sign up to defend Kyiv, for Israel’s security establishment, Europe’s new war is still a remote concern compared with dealing with the hostile forces on its own borders. Containing Iranian activity remains the country’s number one priority.

Russian intervention in Syria’s civil war in 2015 turned the tide of the conflict in Bashar al-Assad’s favour. Moscow is now the major power in Syria’s skies, dropping bombs on Syrian civilians in areas still outside the regime’s control, and allowing the Israeli air force to operate against Hezbollah and other Iranian-backed groups active in the conflict.

Michael Herzog, Israel’s ambassador to the US, said in a tweet on Wednesday: “While our moral position [on Ukraine] is clear, we are striving to pursue it in a way that will maintain our freedom of operations against Iran in the region, which is in everybody’s interest.” 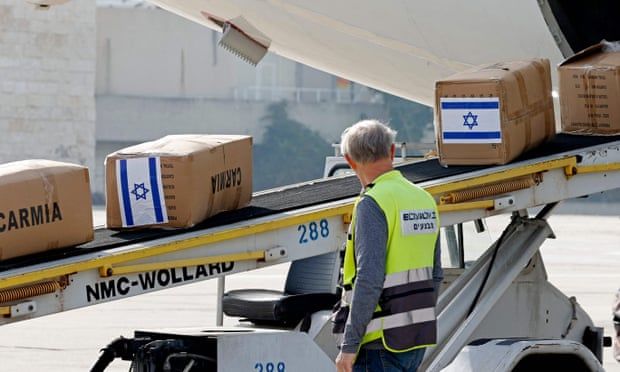 Aid for Ukraine is loaded on to an aircraft at Israel’s Ben Gurion airport.

In the meantime, the first Israeli shipment of humanitarian aid has arrived on the Polish-Ukrainian border, which includes 17 tons of medical equipment and medicine as well as winter tents and sleeping bags for 3,000 people. About 200,000 Ukranians with Jewish ancestry are eligible for Israeli citizenship, and Tel Aviv is expecting an influx of between 10,000 and 15,000 people in the coming weeks.

Shmuel Shpack, the Ukraine director for the Jewish Agency, which brings Jewish immigrants to Israel, said: “I never imagined I would end up doing what I am doing today. I’ve seen things I never thought I would see in my life, it’s like world war II, people sitting in lines for two days.”

He has barely slept in the last week, fielding 200 phone calls a day from refugees at his new makeshift operations centre on the frontier with Poland. “Like everyone else, until the last moment we weren’t sure something was going to happen,” he said. “But now we have seen we have to prepare for full-scale war.”