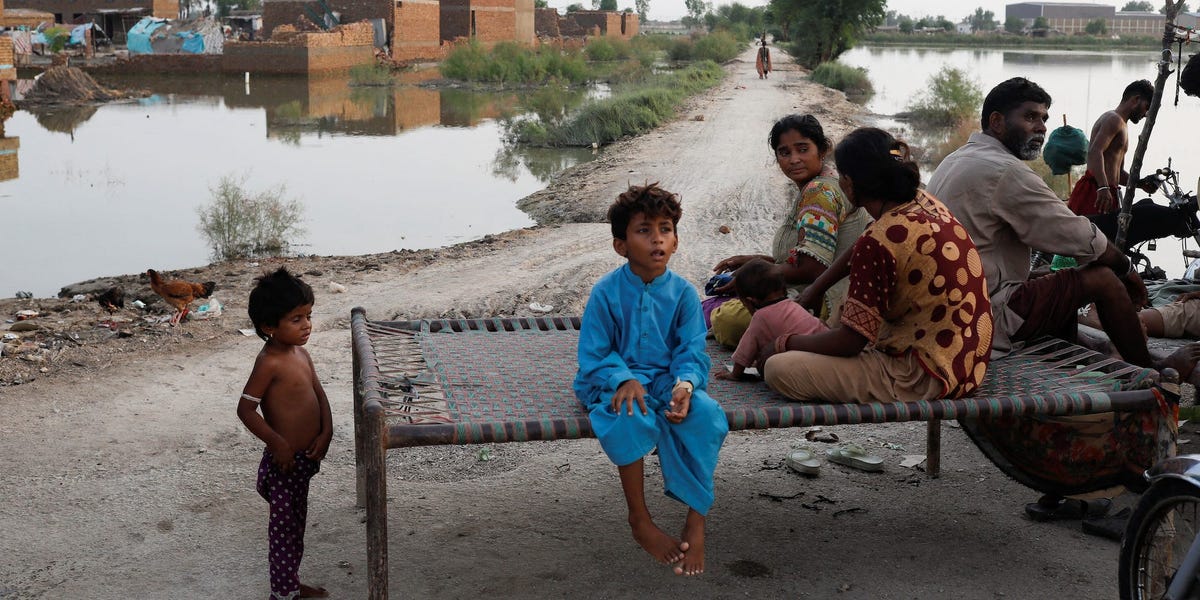 These developing countries scored a quick breakthrough nearly a week ago when the global talks got underway. They managed to get the issue of "loss and damage" added to the agenda for the first time in the history of the UN climate convention.

Egypt and Pakistan, where flooding killed 1,700 over the summer and inflicted an estimated $30 billion in damages, led the push to make reparations part of the discussion.

Now comes the hard part: Over the next week, a debate will play out between rich economies, like the US and those in Europe, and poorer countries over how to compensate developing nations for climate-fueled disasters for which they bear little responsibility.

John Kerry, the US special climate envoy, on Saturday told reporters that making loss and damage an official agenda item means there will be "an outcome of some kind," though he said he doesn't know how it will take shape. Kerry also alluded to comments he's made in the past about putting China on the hook for climate reparations. That country is now the world's largest emitter of greenhouse gas emissions.

"There are a whole bunch of countries that have been burning coal for 70 or 80 years that have also contributed to where we are," Kerry said. "How do you manage that?"

Chinese climate envoy Xie Zhenhua said Wednesday that the country would not pay into a loss and damage fund for developing nations but supported their cause, Voice of America reported. China is categorized as a developing nation under the terms of the UN climate convention and therefore isn't legally obliged to give climate finance.

Kerry cast doubt that an agreement on a "financial arrangement" for loss and damage would be achieved at COP27, which ends November 18. However, a deal could come together by next year's conference, he said.

Egypt is an appropriate location for the talks, which are playing out over two weeks. The entire African continent accounts for just 3% of global greenhouse gas emissions yet is among the most vulnerable to disasters like drought and heat waves. Millions of people from Kenya to Somalia are on the brink of famine, in part because of climate upheavals. The British Red Cross described the situation as the worst food crisis in parts of the continent in 40 years.

Wealthy countries like the US and those in Europe account for 80% of greenhouse gas emissions after more than a century of burning fossil fuels to industrialize their economies. They've repeatedly objected to discussing loss and damage during past UN climate negotiations over concern that such talks would result in enormous financial liabilities.

The US position shifted this year under President Joe Biden. A State Department spokesperson told Insider that the administration was open to the agenda item and would engage in talks on how to address loss and damage.

Brandon Wu, director of policy campaigns at ActionAid USA, a social-justice nonprofit, said he hopes the issue gets more than just lip service during COP27, the shorthand for the UN's "conference of the parties" climate talks.

"This is a welcome shift from their previous unwillingness to engage in formal negotiations about loss and damage finance, but it's not anything more than that — a willingness to talk," Wu told Insider. "What matters is what they're willing to agree to."

ActionAid joined nearly 150 organizations last month in urging Kerry to support the creation of a specific fund for loss and damage that is separate from financing for climate mitigation and adaptation projects in developing countries. More than a decade ago, rich nations promised to send $100 billion a year to poorer countries by 2020. Wealthy countries continue to fall short, according to a report released by Germany and Canada ahead of COP27.

Wu said a separate finance structure is needed because humanitarian assistance is reactive after disasters and doesn't always flow to the countries most in need — in some cases because they don't make headlines.

"Humanitarian aid historically hasn't built climate resilience," he added. "There were massive floods in Pakistan in 2010. Billions of assistance flowed there in 2010, and when a new round hit this year, they were in the same boat."

Scientists at World Weather Attribution found that more intense rainfall due to human-caused climate change, as well as inadequate infrastructure, high poverty rates, and economic instability, were all factors in the devastation in Pakistan.

Some developed nations have already stepped up. Scotland, which hosted last year's UN climate summit in Glasgow, became the first to pledge funding for loss and damage with a $2 million contribution. Denmark, in September, followed suit with a $13 million pledge.

Some developed nations have already unveiled contributions during COP27. Germany announced $176 million for loss and damage and Austria also pledged $50 million. Belgium is donating $2.6 million to Mozambique, which endured extreme rains last year. Scotland added another $5.7 million in donations to the $2 million it had already announced.

If countries do agree to establish a separate fund on loss and damage, Wu said it could take years to hash out how it's set up, including how to calculate who pays what and how to ensure the money is distributed equitably.
#Joe Biden