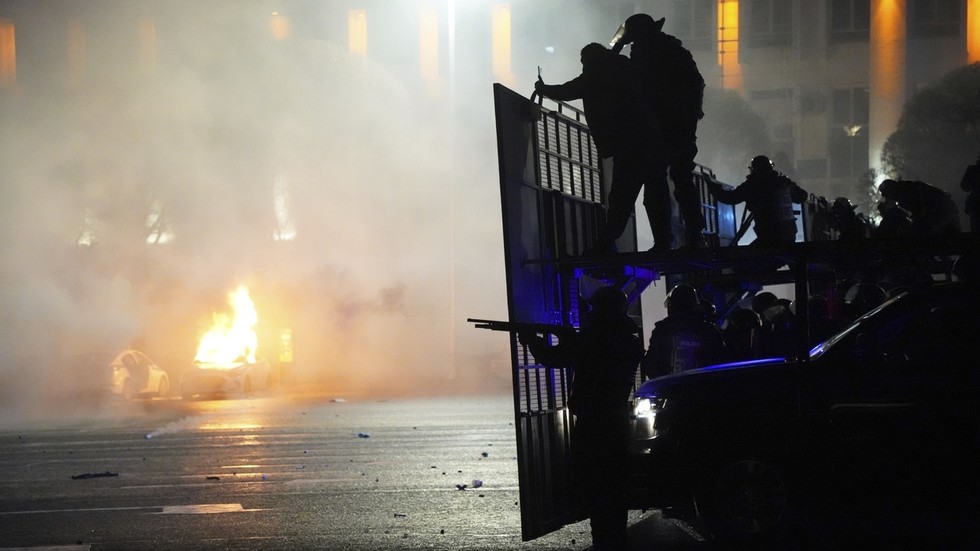 Kazakh president authorizes use of lethal force against protesters 'without warning'

The head of state rules out any negotiations with those he calls “terrorists”
Kazakh President Kassym-Jomart Tokayev announced on Friday that he has given permission for law enforcement agents to use lethal force to quell the unrest that has engulfed the country since the new year.

“I have given an order to the law enforcement and military to shoot to kill without warning,” Tokayev announced on Friday.

The president has rejected the idea of resolving the ongoing crisis through negotiations. “It’s nonsense. What kind of talks can one have with criminals and murderers?” he insisted.

Kazakhstan is facing “armed and well-trained militants, both local and foreign,” Tokayev said. Describing them as “bandits and terrorists,” he asserted that they should be “eliminated.”

The situation has mostly stabilized in Almaty, Aktobe, and elsewhere across the country, he said, but the security forces are continuing their “anti-terrorist operation,” as not all of the perpetrators have laid down their weapons.

The state of emergency will now be gradually lifted, according to the president. The internet, which had been switched off a few days ago, will be restored in some parts of the country, he promised, adding that its reinstatement would nonetheless not allow anyone to “freely post fabrications, slander, insults, and inflammatory appeals.”

Those who attacked the country acted in accordance with a well-designed plan, Tokayev said, targeting key military, administrative, and social facilities in almost all of the regions.

“Only in Almaty, there were 20,000 bandits,” he alleged. They were backed by propaganda experts who spread fake news online and manipulated the mood of the people, the president insisted.

He also thanked fellow member states of the Collective Security Treaty Organization (CSTO) – Armenia, Belarus, Kyrgyzstan, Russia, and Tajikistan – for answering his call and deploying peacekeepers to help restore order in Kazakhstan. The CSTO mission would remain in the country “for a limited period of time” to support the local security forces, the president clarified.

Earlier on Friday, the Kazakh Interior Ministry said 26 armed assailants had been killed and 18 others injured during the recent outbreak of violence. More than 3,700 people have been detained. There were at least 18 fatalities among the military and police as of Thursday, reports outlined.

People took to the streets in Zhanaozen and Aktau on the first days of 2022 in response to a two-fold hike in the liquefied petroleum gas price, which had previously been subsidized by the government. Despite the authorities promising to keep the price under control, the protest swiftly spread to other cities, and turned increasingly violent.

Almaty, the largest city, has become the focus of the unrest, with demonstrators – some of whom were equipped with firearms – storming the mayor’s office, the old presidential palace, and the airport. Numerous businesses have been ransacked and looted, with police stations also being attacked.