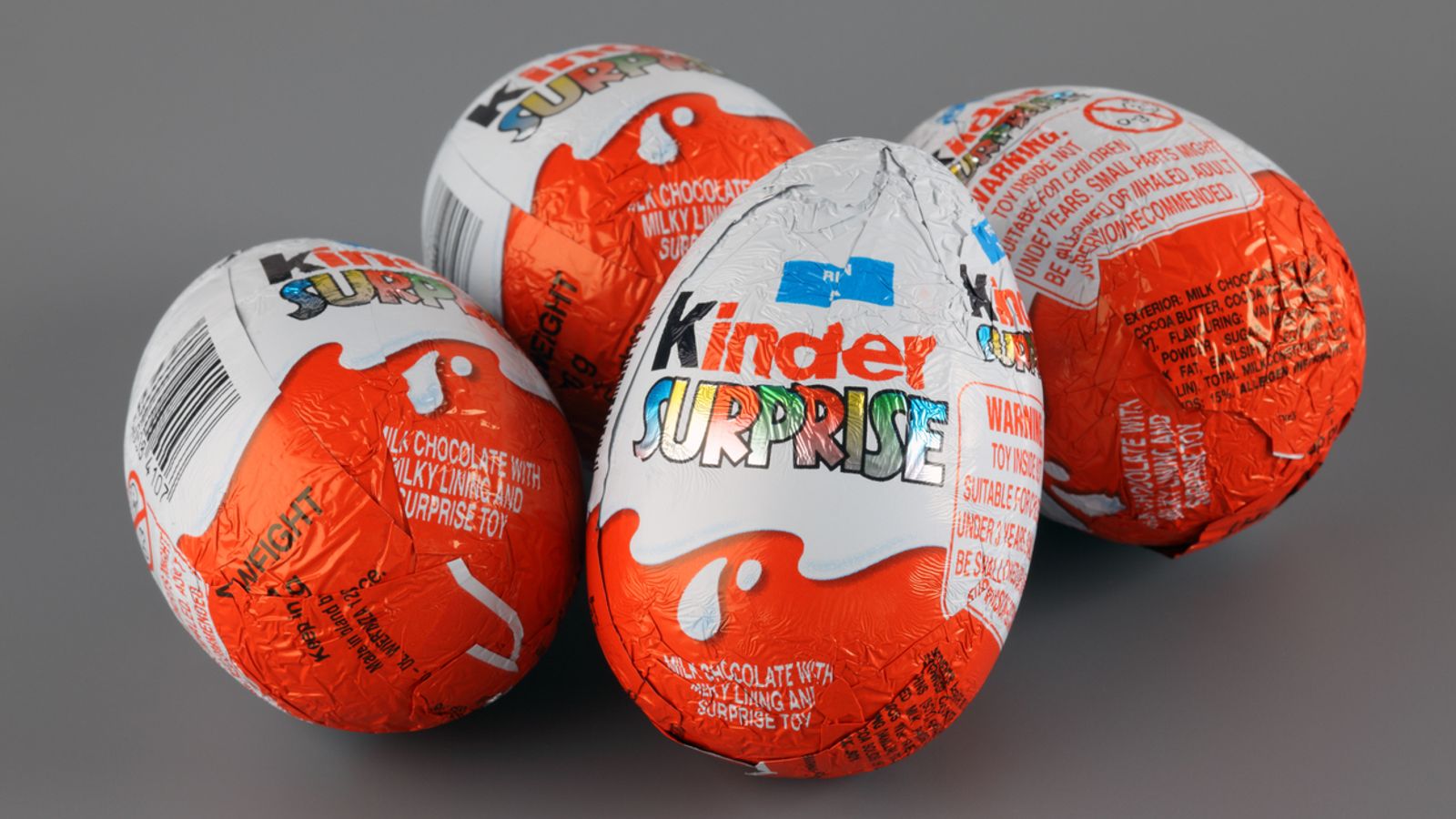 The UK's Food Standards Agency has said the products have been recalled due to a "potential link to a salmonella outbreak" where 57 cases have been found, with just over three quarters of those being children aged five or under.

Parents are being urged not to give their children certain Kinder Surprise chocolate eggs due to the possible presence of salmonella.

The UK's Food Standards Agency (FSA) said the eggs have a "potential link to a salmonella outbreak" where 57 cases have been found, with just over three quarters of those being children aged five or younger.

Ferrero, which owns the Kinder brand, has recalled batches of its individual 20g eggs and those that come in packs of three with a best before date of between 11 July 2022 and 7 October 2022.

The chocolate manufacturer said the eggs were made in Belgium.

The company said in a statement: "Ferrero is co-operating with the UK Food Standards Agency and the Food Safety Authority of Ireland on a possible link to a number of reported cases of salmonella.

"Although none of our Kinder products released to market have tested positive for salmonella, and we have received no consumer complaints, we are taking this extremely seriously as consumer care is our top priority."

The statement continues: "We take matters of food safety extremely seriously and we sincerely apologise for this matter."

The recall comes weeks before Easter, when Ferrero would likely have been hoping for a boost in sales.

Confirming the recall, the FSA said: "This is in connection with a potential link to a salmonella outbreak. A number of these cases have been young children."

It added: "To reduce the risk of any further illness, consumers should not eat the products listed in the recall alert and they/the parent or guardians of children should follow the risk advice within it."

"If you have bought the below product, do not eat it."

The agency also encouraged people who have bought one of the products to contact Ferrero for a refund.

The link between reported cases of salmonella poisoning and Kinder eggs was found after investigations led by the UKHSA, Public Health Scotland, Public Health Wales and the Public Health Agency in Northern Ireland.

The FSA said the eggs were all manufactured at the same factory.

Other Ferrero products are not thought to be affected.

The illness tends to go away after a few days, but symptoms can be more severe and lead to hospital admission, especially in the very young and those with weakened immune systems.