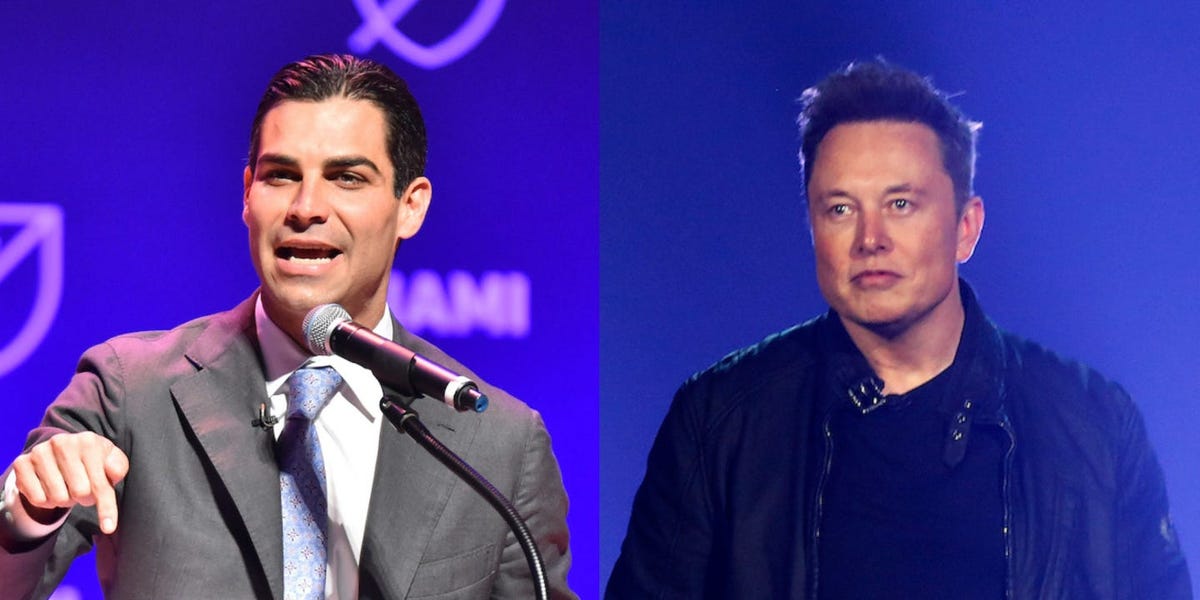 The Tesla and Space X CEO hasn't yet responded to Miami's mayor about whether he'd consider moving the company's headquarters out of San Francisco.
Miami Mayor Francis Suarez hasn't given up on trying to lure Twitter away from San Francisco.

"I think they belong here," Suarez told Insider during an interview on Wednesday at City Hall. "I think that their rebranding fits our city, which is a city that puts a premium on liberty and freedom of expression."

Suarez publicly urged Twitter to move its headquarters to Miami by tweeting the suggestion to CEO Elon Musk at the beginning of December.

But Musk, one of the world's richest people who is also CEO of SpaceX and Tesla, hasn't gotten back to Suarez even though the mayor tried to reach him through several channels. The two have yet to have a phone call about the prospect, Suarez said.

"I have reached out to him through multiple different sources of people that I know are close to him, people that are friends of his, former board members of his companies, people that are helping him with the project," Suarez said. "I haven't heard back yet. Obviously, it's a hyper-complex situation with everything that's going on."

Suarez proposed relocating the company headquarters from San Francisco after Forbes reported that city building inspectors launched an investigation into reports that Twitter converted several office rooms at its headquarters into bedrooms so workers could work long hours and sleep there.

"So city of SF attacks companies providing beds for tired employees instead of making sure kids are safe from fentanyl," he wrote.

Suarez then chimed in on Twitter to say it was time for the social media giant to make a geographical change for its business. Suarez, 45, is a Republican but the office of the Miami mayor is considered nonpartisan.

Should Twitter make the leap to Miami, it would be far from the only big company to do so. Suarez has been shepherding the city toward becoming a major tech hub — a migration that became especially pronounced during 2020 pandemic lockdowns.

One of Miami's biggest business gains was the hedge fund and financial services company Citadel, which moved its headquarters from Chicago. Citadel CEO Ken Griffin is a lead donor to Florida Gov. Ron DeSantis, and Suarez said such business migrations would help turn Miami into what he called the "capital of capital" and "the epicenter of aggregation and deployment of capital."

"Those kinds of big-movement events have an ability to change the dynamic and continue the process of changing the reputation of our city — from a city that was just a place to go to have fun, or a place that you would maybe go to retire, to a place where you could do serious business," he said.

Suarez, who is of Cuban descent, told Insider that Musk's repositioning of Twitter made it a strong fit for Miami because "this is a city that leans into the American dream and the American experience of working hard and wanting to better yourself." Nearly three-quarters of people living in Miami are Hispanic, and Suarez said many families who live here come from countries in which "freedoms are taken away."

As CEO of Twitter, Musk has promised to unleash free speech. He altered Twitter's content-moderation policies and reinstated certain banned accounts, including that of former President Donald Trump.

Musk, however, also temporarily suspended the accounts of a number of journalists after accusing them of "doxing." Some of the reporters had written about the suspension of the account @ElonJet, a Twitter account that used publicly-available information to track the whereabouts of Musk's private jet.

It's not clear whether Musk is considering moving the company's headquarters. A Twitter message Insider sent to the company's communications team was not answered.

Musk formally acquired Twitter in October for $44 billion, and since then he cut about half the company's workforce. He launched new features and revoked others, and various celebrities have quit the platform. Musk has said he'll step down as CEO once he finds someone else to fill the role.

Asked about the "Twitter Files" of internal company deliberations that Musk released to select independent reporters, Suarez said that he was not "overly shocked" because of already-existing perceptions about the company under previous leadership.

The "Twitter Files" reporting included communications that showed how Twitter employees decided which tweets or accounts to suppress and elevate, as well as input from government entities under both the Biden and Trump administrations.

"Maybe that'll create some measure of accountability and fear that if you're working in a company, this could happen," Suarez said. "Somebody could buy the company say, 'Hey, we're going to air out our practices and procedures,' and so you should be thinking about that possibility."
#Donald Trump  #Elon Musk  #Tesla