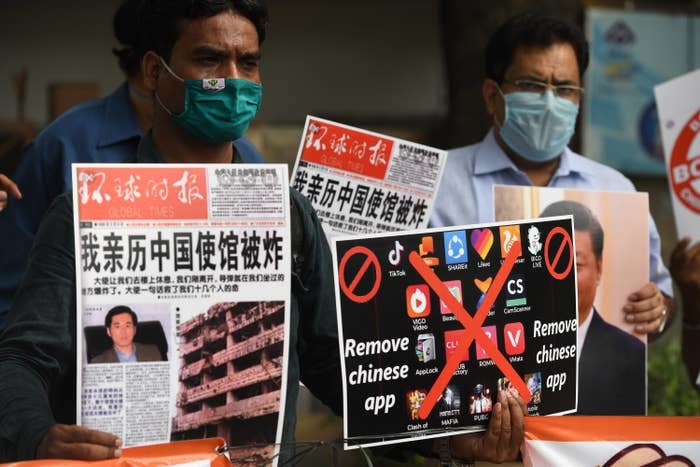 Mike Pompeo Said The US Is Considering Banning TikTok

“I don’t want to get out in front of the president, but it’s something we’re looking at," Pompeo said.
The United States is considering banning TikTok and other apps from China over national security concerns, Secretary of State Mike Pompeo told Fox News’ Laura Ingraham in an interview on Monday.

“You should know we’re taking this very seriously. We’re certainly looking at it,” said Pompeo in response to a question from Ingraham about whether the US would think about banning Chinese social media apps days after India - TikTok’s largest market outside China - banned nearly 60 Chinese apps including TikTok, following border clashes with the country.

“With respect to Chinese apps on people’s cellphones, I can assure you the United States will get this one right too, Laura,” Pompeo said. “I don’t want to get out in front of the president, but it’s something we’re looking at.”

When asked whether Americans should download TikTok on their phones, Pompeo said: “Only if you want your private information in the hands of the Chinese Communist Party.”

In response to Pompeo's comments, a TikTok spokesperson told BuzzFeed News: “TikTok is led by an American CEO, with hundreds of employees and key leaders across safety, security, product, and public policy here in the U.S. We have no higher priority than promoting a safe and secure app experience for our users. We have never provided user data to the Chinese government, nor would we do so if asked.”

Pompeo’s comments come at a time when tensions between the United States in the areas of trade, technology, and national security among others, are escalating. Last week, the Federal Communications Commission (FCC) declared Chinese telecom companies Huawei and ZTE as threats to national security and banned networks in the US from using federal funds to purchase equipment from them.

After India banned 59 Chinese apps last week, Pompeo said the United States welcomed the move to ban mobile apps “that can serve as appendages of the CCP’s surveillance state.”

TikTok is owned by Beijing-based ByteDance - one of the world’s most valuable companies - which was worth $100 billion in May, according to Business Insider. Over the last few years, the app has exploded in popularity with teens and young millennials in countries like India and the United States, clocking up more than 2 billion downloads earlier this year. It’s the first Chinese app that has successfully caught on in any significant way outside its home country.

But TikTok’s popularity and its links with China have drawn scrutiny from around the world. Last year, US lawmakers expressed concern about the company’s censorship of users who criticized the Chinese government and about whether the app sent the private data of Americans back to China.

To gain trust with Washington, TikTok hired Kevin Mayer, a former Disney executive in the US, to be the company’s CEO last year, and has said it operates separately from ByteDance. The company stores the data of American users “exclusively” on servers in Virginia and Singapore, the New York Times reported last year.