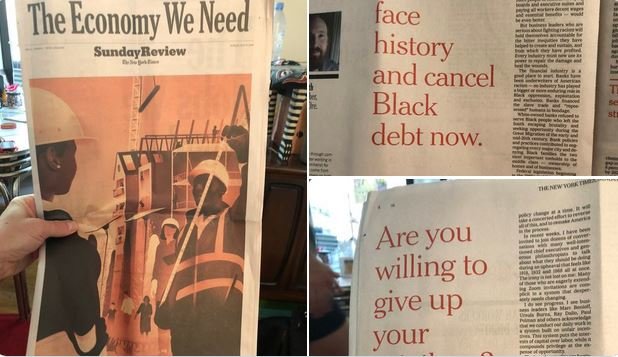 The New York Times devoted its entire “Sunday Review” section this weekend to an economic manifesto that lays out a left-wing vision for redesigning the American economy in the wake of the coronavirus pandemic. The Times focuses on redressing economic inequality as the main challenge - not economic growth, or job creation.

Other economic proposals in the manifesto include a plan for banks to pay reparations: “First, [banks] must apologize for their culpability for and complicity in structural racism. Next, they must commit to serving black people as they do whites.” Four additional steps are proposed: “Cancel consumer debt for black customers”; “Eliminate banking fees for black customers”; “Provide interest-free mortgages to black home buyers”; “Provide interest-free loans to black-owned businesses.”

Another proposal calls for raising the inheritance tax — what Republicans call the “death tax,” because it is payable by the deceased (or their estates):

There are plenty of sensible options for increasing taxes on inheritances. Returning the estate tax to its 2009 levels would raise $270 billion over the next decade. Further increasing the rate so that it rises to 65 percent on estates over $1 billion would raise an additional $100 billion.

The manifesto also calls for a 28th Amendment to the Constitution to enshrine something called “voter equality,” which appears to mean a guarantee of high turnout among poorer voters. The amendment would grant “all adult citizens the right to vote in federal elections,” with no exceptions.

Another heartfelt essay calls on wealthy Americans to “give up your privilege.”

Prior to the coronavirus the U.S. economy was experiencing what President Donald Trump called a “blue-collar boom.” Minority unemployment was at the lowest levels in history. Wages for the lowest-paid workers were rising faster than wages for the highest earners. Inequality was in retreat, as economic growth created new opportunities, and the enforcement of immigration laws gave working-class Americans a chance to compete.