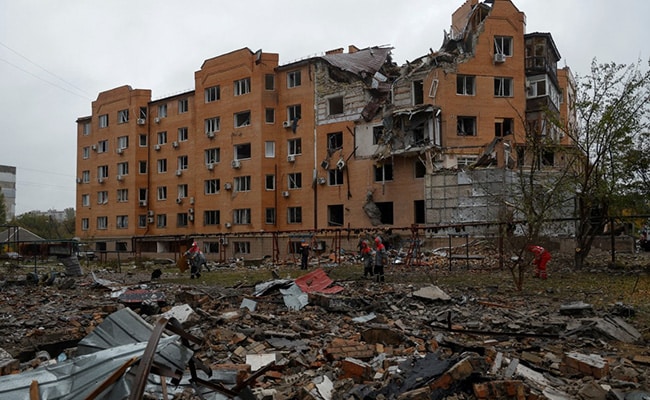 There is no prospect of a negotiated end to the war in Ukraine, according to Irina Scherbakova, one of the co-founders of the Nobel Peace Prize-winning Russian rights organisation Memorial.

"I am absolutely convinced that there is not a diplomatic solution with Putin's regime, so long as it is still there," Scherbakova said Sunday in Hamburg, Germany.

Her comments came as she was presented with another award for her years of work cataloguing Stalinist-era crimes and campaigning on rights issues in her home country.

German Chancellor Olaf Scholz handed over the Marion Doenhoff Prize to Scherbakova, praising her as an ally in the fight for a "peaceful, free and democratic future for Europe".

Scherbakova's accolades come after Russia's invasion of Ukraine means those aims seem further away than ever.

Her lack of hope for a diplomatic solution was a "tragic message", Scherbakova said.

"The solution (to the conflict) that there will now be is a military one," she said.

Diplomacy would ultimately play a role in resolving the conflict, she speculated.

"But these decisions, this diplomacy will only happen when Ukraine believes it has won this war and can set its terms," she said.

Hasty calls for peace were "childish", she said, adding that things would not return to the way they were before the outbreak of the conflict.

"This war has turned so many things upside down, it will never be like that again," she said.

Now based in Germany, Scherbakova said there was "a lot of work to do at the moment under very difficult circumstances to document crimes" committed in the course of the current war.

While some of her colleagues from Memorial have also fled abroad, many have continued to work under "much pressure" in the country, she said.

"The task now is to show people that there is another Russia, that it is not silent," she said.

Scherbakova's organisation, Memorial, will be presented with the Nobel Peace Prize in Oslo on Saturday December 10.

The group was awarded the prize along with fellow campaigners the Centre for Civil Liberties in Ukraine and the Belarussian activist, Ales Bialiatski.

One of the foremost Russian civil liberties organisations, Memorial has worked for decades to shed light on terrors from the era of Soviet dictator Joseph Stalin, while also compiling information on ongoing political oppression in Russia.

The group, founded in 1989, was forcibly shut down by Russian courts at the end of 2021 and Scherbakova left Moscow following the invasion of Ukraine.

Scherbakova's efforts showed the way of a "better future for Russia", Scholz said, even if the prospect "still seems unlikely".

The war will not end with "a victory for Greater Russian expansionism", said Scholz, who has faced repeated criticism for not doing more to support the Ukrainian war effort.

Russia will, however, "still be there" after the end of the conflict, Scholz stressed.

"That is why it is so important that in this period we support those Russians standing up for a different, better, brighter Russia," he said.