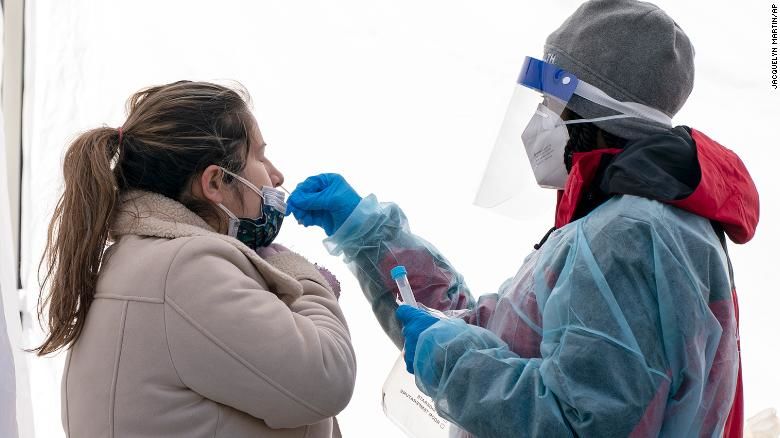 Omicron surge is 'unlike anything we've ever seen,' expert says

An unprecedented spike in Covid-19 cases fueled by the fast-moving Omicron variant is crushing hospitals across the United States, with doctors describing packed emergency rooms as health experts implore New Year's Eve revelers to keep parties small and outdoors to help avert an even worse surge.

"It's unlike anything we've ever seen, even at the peak of the prior surges of Covid," Dr. James Phillips, who works in Washington, DC, said Wednesday, when the nation hit a new pandemic high of 300,886 average new daily cases over the prior week, according to Johns Hopkins University data.

It's a scene playing out across the country as record case counts are reported from New Jersey and New York to Arkansas and Chicago, where hospital bed capacity also is a concern. In Arizona and New Mexico, federal medical personnel have deployed to provide Covid-19 surge support.

And in Georgia, six major health systems with recent 100% to 200% jumps in Covid-19 hospitalizations -- with most patients unvaccinated -- joined to publicly urge people to seek coronavirus testing elsewhere so their emergency rooms can focus on those with critical needs.

Level of community spread across US

These categories, issued by the Centers for Disease Control and Prevention, are based on county-level data on the number of new cases per 100,000 people and the test positivity rate during the past seven days. 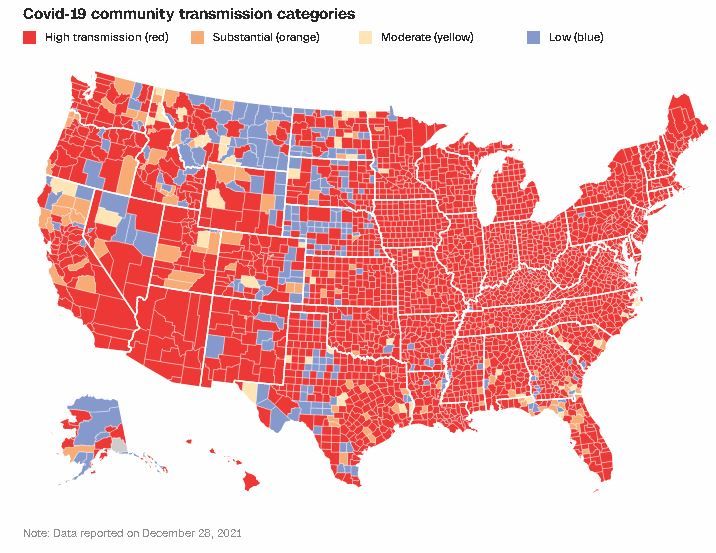 In Louisiana, Covid-19 hospitalizations have tripled in the past two weeks as a new record for cases was set, according to the state. Symptomatic patients have been showing up at Baton Rouge's Our Lady of the Lake Regional Medical Center to get tested, said the chief medical officer, Dr. Catherine O'Neal.

"We're seeing an increase in admissions that is startling," she told CNN on Wednesday.

Many patients O'Neal sees are unvaccinated, she said. They often have more severe illness with pneumonia and need to be intubated or need high-flow oxygen. Others who haven't had a booster or are only partially vaccinated are suffering with a kind of flu-like illness and are "fragile," she said.

"They're older, they have heart failure, they have COPD, and they can't handle Covid, even when they're vaccinated," O'Neal said. "Luckily, most of those people are turning around after a couple days and going home, which is a good thing."

Nationwide, nearly 78% of ICU beds are in use, with 22% of those occupied by Covid-19 patients, according to data from the US Health and Human Services Department.

And pediatric hospital admissions for Covid-19 are the highest they've ever been over the course of the pandemic. On average, 378 children were admitted to the hospital with Covid-19 on any given day over the week that ended December 28, according to data published Thursday by the US Centers for Disease Control and Prevention and the US Department of Health and Human Services. That is well above the previous record average of 342 admitted children seen at the end of August and early September.

Covid-19 patients in US hospitals

The purple line represents a snapshot of hospitalized patients reported each day. 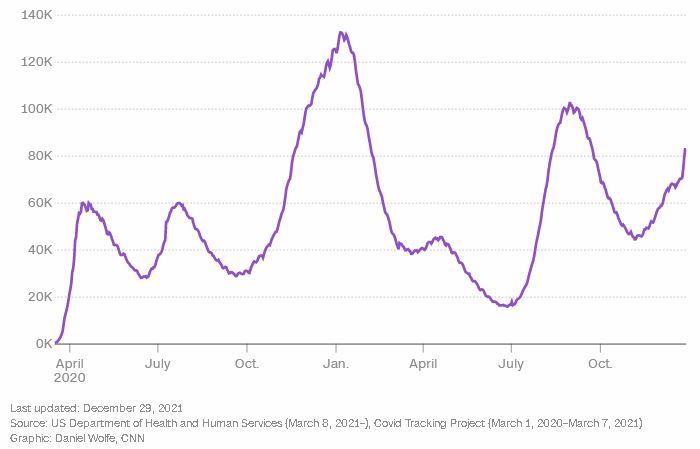 Unvaccinated people "are 17 times more likely" to be hospitalized with Covid-19, CDC Director Dr. Rochelle Walensky said Wednesday. Some 62% of the total US population is fully vaccinated, and 33% of those have gotten a booster shot, data from the CDC shows.

Indeed, the number of lives the virus is claiming jumped this week by about 18%, for an average of 1,546 deaths each day, according to the data. And more than 44,000 people could die of Covid-19 in the next four weeks, according to an ensemble forecast from the US Centers for Disease Control and Prevention published Wednesday. 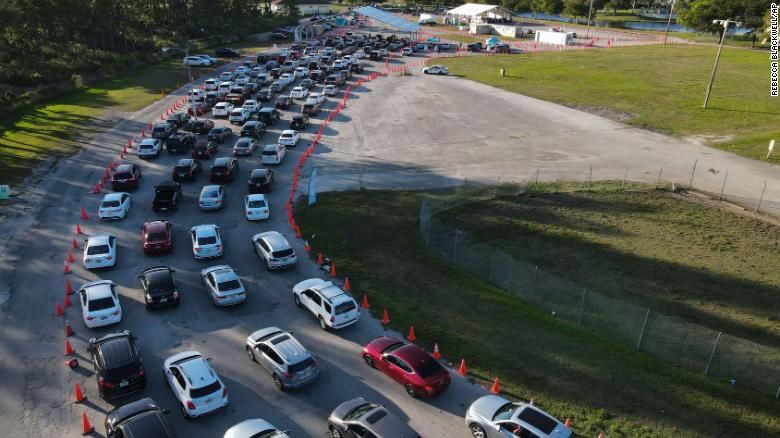 There was a little encouraging news this week. The Covid-19 case increase associated with the Omicron variant could peak in the US by the end of January, Dr. Anthony Fauci, director of the National Institute of Allergy and Infectious Diseases, told CNBC on Wednesday.

"It certainly peaked pretty quickly in South Africa, it went up almost vertically and turned around very quickly," he said. "I would imagine, given the size of our country, and the diversity of vaccination versus not vaccination, that it likely will be more than a couple of weeks, probably by the end of January, I would think."

"We're in the public health crisis of our lifetime," Reiner told CNN's Phil Mattingly on Thursday. And New York City's Times Square New Year's Eve celebration "should have been canceled," in part because attendees might "pack the subways" to get there, he said. The event has been scaled back, with fewer revelers and everyone required to wear a mask.

The Omicron variant "is extraordinarily contagious, and if you are in a crowd now, and certainly if you're unvaccinated, you are at great risk of contracting this virus," Reiner told CNN's Jake Tapper on Wednesday.

A small celebration at a friend's house should be OK if everyone is vaccinated and boosted and tested negative before the party, he said. Big outdoor parties are less risky unless they're crowded.

"I would not eat in a restaurant now without a mask," Reiner said Thursday. "I would absolutely not go into a bar."

"When you are talking about a New Year's Eve party, where you have 30, 40, 50 people celebrating, you do not know the status of the vaccination -- I would recommend strongly, stay away from that this year. There will be other years to do that, but not this year," Fauci told Fox News.

Meantime, the CDC is defending itself against criticism over its guidance this week that shortened to five days the recommended time those with Covid-19 should isolate if they're asymptomatic. New research, combined with some infected people's reluctance to isolate for 10 days, spurred some of the latest guidance, Walensky said Wednesday.

So, for those who test positive but have no symptoms or dwindling symptoms at Day 5, "we shortened the time to encourage people to do the right thing," Walensky told CBS. "We don't want them out and about when they are maximally infectious."

The CDC is being too harshly criticized for changing the guidelines, said Michael Osterholm, director of the Center for Infectious Disease Research and Policy at the University of Minnesota. "Everything we're going to do right now is imperfect. Just accept that right now," Osterholm told CNN on Wednesday.

"We don't know a lot of the things we wish we'd know, but what we do know and what is emerging here is that this country is going to be in the soup in just the next few weeks with so many cases and so many locations, that we're going to see critical infrastructure as well as health care challenged," Osterholm added.

With the rapid spread of Omicron, there may not be enough people who are well enough to keep hospitals, grocery stores and gas stations working, Osterholm predicted. The change in CDC guidelines is not just about helping the economy, he said: "It was to play to the very safety of our everyday lives."