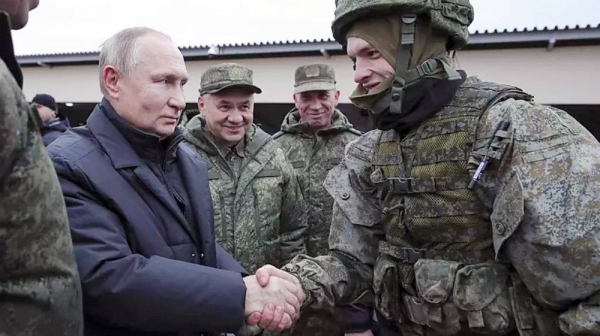 Putin creates new committee to churn out weapons, asks it to think outside the box

The Russian government has to “not hide behind formalities” and speed up the production of weapons and supplies to keep feeding its war in Ukraine, the Russian president urged.
The Russian military’s shortfalls in the eight-month war have been so pronounced that Russian President Vladimir Putin had to create a new body to try to address them.

On Tuesday, he chaired a new committee designed to accelerate the production and delivery of weapons and supplies for Russian troops, stressing the need to “gain higher tempo in all areas”.

Dubbed “Coordination Council for Meeting the Needs of the Special Military Operation”, Putin tasked the body with “everyone to put their minds to meaningful work in the new format” and “resolve all issues faster and more efficiently”, Russian state-owned news agency Tass reported on Tuesday.

Russian news reports have acknowledged that many of those called up under a mobilization of 300,000 reservists Putin ordered haven’t been provided with basic equipment such as medical kits and flak jackets and had to find their own.

Other reports have suggested that Moscow’s troops are increasingly forced to use old and sometimes unreliable equipment and that some newly mobilized troops are rushed to the war front with little training.

Last week, Putin tried to show all is well by visiting a training site in Russia where he was shown well-equipped soldiers.

To substitute for increasingly scarce Russian-made long-range precision weapons, Britain’s Ministry of Defense said Russia was likely to use a large number of drones to try to penetrate Ukrainian air defenses.

The Institute for the Study of War in Washington added, “The slower tempo of Russian air, missile, and drone strikes possibly reflects decreasing missile and drone stockpiles and the strikes’ limited effectiveness of accomplishing Russian strategic military goals.”

The Russian military has still managed to inflict heavy damage and casualties, ruining homes, public buildings and Ukraine’s power grid. The World Bank estimates the damage to Ukraine at €350 billion since February.

One of Moscow’s allies on Tuesday urged Russia to step up the pace and scale of Ukraine’s destruction.

Ramzan Kadyrov, the regional leader of Chechnya who has sent troops to fight in Ukraine, urged Moscow to wipe entire cities off the map in retaliation for the Ukrainian shelling of Russia’s territory.

Authorities in Russia’s Kursk and Belgorod regions that border Ukraine have repeatedly reported Ukrainian shelling that has damaged infrastructure and residential buildings.

“Our response has been too weak,” Kadyrov said on his messaging app channel. “If a shell flies into our region, entire cities must be wiped off the face of the Earth so that they don’t ever think that they can fire in our direction.”

“We need tanks from our partners, from all of our partners; we need heavy armored vehicles, we need additional artillery units, howitzers.”