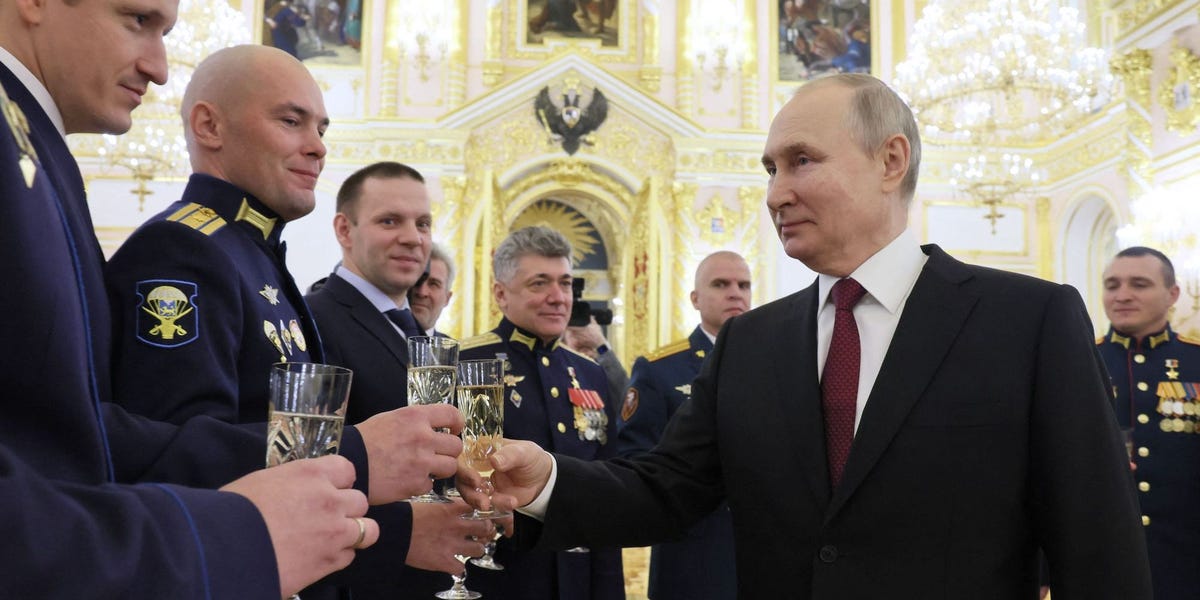 Putin, drink in hand, blames Ukraine for Russia's bombing of its energy infrastructure: 'Who started it?'

Russia invaded Ukraine in February and escalated their attacks on Ukraine's energy system, leaving millions without power and water as winter hits.
With a glass of champagne in hand at an awards ceremony at the Kremlin, Russian President Vladimir Putin on Thursday blamed Ukraine for Russia's bombing campaign that has targeted civilian infrastructure.

"There's a lot of noise about our strikes on the energy infrastructure of a neighboring country," Putin said, per BBC News. "Yes, we do that. But who started it?" added Putin, who ordered Russia's unprovoked invasion of Ukraine in late February.

Among other incidents that Ukraine is thought to have orchestrated, the Russian leader cited an October explosion that damaged the bridge connecting Russia and Crimea — the peninsula on the Black Sea that Putin illegally annexed from Ukraine in 2014.

Russia blamed Ukraine for the blast that partially destroyed the bridge. Much like drone attacks that hit airbases hundreds of miles into Russia on Monday, Kyiv did not publicly claim responsibility for the bridge incident but celebrated the explosion.

Russia has responded to these apparent Ukrainian attacks with waves of missile strikes on Ukraine's energy infrastructure — attacks that top human rights groups have decried as war crimes.

But Putin on Thursday said criticism of Russia's actions would "not interfere with our combat mission."

Russia's attacks on civilian infrastructure have left millions without water and electricity as the harsh winter begins in Ukraine.

"By repeatedly targeting critical energy infrastructure knowing this will deprive civilians of access to water, heat, and health services, Russia appears to be seeking unlawfully to create terror among civilians and make life unsustainable for them," Yulia Gorbunova, senior Ukraine researcher at Human Rights Watch, said this week. "With the coldest winter temperatures yet to come, conditions will become more life-threatening while Russia seems intent on making life untenable for as many Ukrainian civilians as possible."