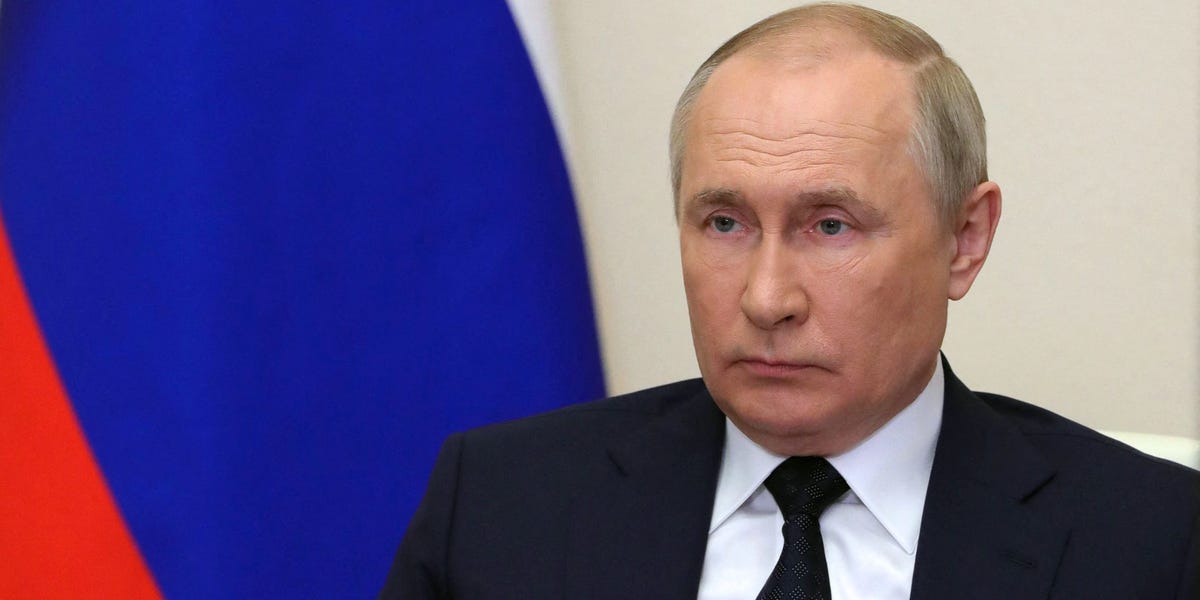 Putin will soon have 'no choice' but to stop his invasion of Ukraine, former US general says

"Putin will have to halt his war in Ukraine sooner or later and probably in a matter of weeks," retired US Army Brig. Gen. Kevin Ryan told Insider.

Russian President Vladimir Putin will likely be forced to bring his failing monthlong war against Ukraine to a halt, a retired US general and Russia specialist told Insider — a scenario that may happen within weeks after Russian forces have sustained heavy losses and subjected Ukraine's cities to indiscriminate attacks.

Retired US Army Brig. Gen. Kevin Ryan said he believed this to be the "most likely scenario" to play out, as Putin has already "failed to accomplish" his "main military goals" in Ukraine — a lightning strike to seize Kyiv, Ukraine's capital, and other big cities and remove their elected leaders — and Russia's economy continues to be decimated by sweeping Western sanctions over its war with the Eastern European country.

"Putin will have to halt his war in Ukraine sooner or later and probably in a matter of weeks," Ryan, who served as the defense attaché to Russia for the US, among numerous other roles, told Insider on Thursday.

Ukraine's armed forces, aided by civilians, have been greatly outnumbered and outgunned by Russian troops since Russia launched its attack in late February, but Ukrainians have managed to put up a fierce resistance, which has resulted in a mounting Russian death toll and an essentially stalled invasion.

An assessment from the Institute for the Study of War found that Ukrainian forces had forced Russian troops into defensive positions, while Putin's forces had "continued to settle in for a protracted and stalemated conflict."

Ryan said the Russian army "has a huge personnel problem."

"There is no significant military unit left in Russia outside of Ukraine. They are all in the fight," he said.

"There is almost no part of the Russian military that's not dedicated, committed to Ukraine, so if he has to escalate, how does he escalate?" he added, referring to Putin.

At this point, Ryan said it would be "impossible" for Russia to take control of all Ukraine like Putin hoped to.

"He does not have the military forces to take all of Ukraine and occupy it," Ryan said, adding: "Russian leadership overestimated what their military was capable of."

Ryan called this "a great achievement by Ukrainian people to have prevented an overthrow of their government and a total seizure of all their land."

Russian troops invaded Ukraine on February 24, and in the weeks since, they have surrounded and shelled several towns across the Eastern European country, hitting multiple civilian targets, including residential buildings, hospitals, and a theater.

But British intelligence said on Friday that thanks to Ukrainian counterattacks, Ukraine had retaken some areas around Kyiv it lost earlier in the war.

Ryan, a senior fellow at Harvard's Belfer Center for Science and International Affairs, said he believed Ukraine would see "an increase in violence" by Russian forces "in the near future" until Putin was forced to halt his military operation.

Putin "can increase the violence and do more damage and destruction in Ukraine," Ryan said.

"He can try to find and encircle and destroy the Ukrainian military, which is smaller than his," he added. "But even if he does all of those things, he cannot strategically do much more with his military."

But he said an end to the war in Ukraine wouldn't "necessarily mean a halt in violence."

"Violence can continue even during the time of negotiations between the sides," Ryan said, adding that the halting of the invasion would likely be "indefinite" until Putin "gets enough concessions from Ukraine" and even from the West regarding the severe sanctions on Russia.

"So until he gets enough concessions," Ryan said of Putin, "I think he would want to stay in that kind of no man's land of a halted military operation — one that could be restarted at any time.

"That would be the threat."