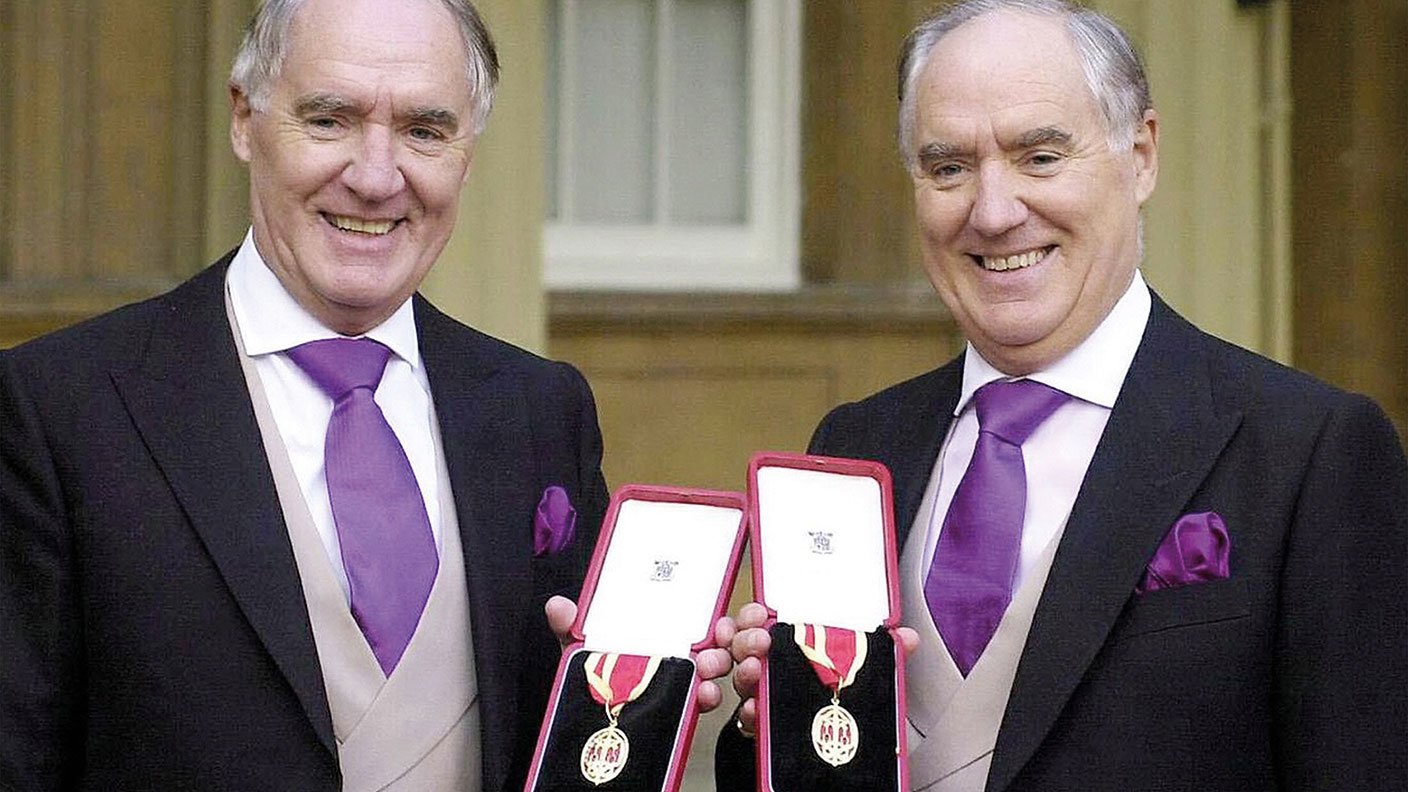 Ritz hotel and The telegraph owners, brothers who built a £3billion empire are embroiled in a bitter feud amid claims one has been spying on the other with bugs in their landmark hotel

Multi-billionaire Barclay twins Sir David and Sir Frederick are embroiled in feud. Brothers - born in Hammersmith - started as 16-year-old painters and decorators. They are now worth some £3 billion and their empire includes The Ritz in London. The heart of the family rift involves the disposal of key assets in their empire
With its elegant panoramic windows and potted palms, the conservatory in London’s iconic Ritz hotel has long been the place to be seen.

But recently it seems it has become a place to be heard.

Not the conversations of guests — perish the thought. But in a bizarre development in the lifelong partnership of The Ritz’s owners, the multi-billionaire Barclay twins, one brother’s family has apparently been bugging the other.

It is surely the most unexpected of all the twists and turns that have shaped the near 70-year collaboration of the knighted businessmen Sir David and Sir Frederick.

Born in Hammersmith to Scottish parents who had eight other children, they started out as 16-year-old painters and decorators. Today with a privately owned empire that encompasses shipping, retail and The Ritz, as well as the Telegraph media group, they are worth some £3 billion.

Since both are well into their ninth decade, it seems no time for the brothers — indeed, twins so identical that people could mistake one for the other — to fall out. But as one family source puts it, ‘it’s a feud’.

And as the High Court heard this week, Sir Frederick, the younger by ten minutes, has been secretly bugged by his twin’s sons and grandson for several months. The bugs — described in court as ‘an elaborate system of covert recordings’ — were allegedly placed in the hotel conservatory, near one of Sir Frederick’s favourite spots where he enjoyed cigars and talking to his only daughter Amanda.

The heart of this gripping family rift involves the disposal of key assets in their empire. The private family company includes Very, the catalogue retailer formerly known as Shop Direct, Yodel the delivery company, the newspapers the Daily Telegraph and Sunday Telegraph and, of course, The Ritz, which they bought 25 years ago for £75 million.

A deal is understood to be on the table in which a Saudi private investment company would buy the historic hotel on the edge of Green Park for £750 million. But family sources tell us that Sir David does not want to sell, even though its profits in 2018 fell from £13 million to £7 million.

Matters are also said to be complicated by Sir Frederick’s divorce from his Japanese-born wife Hiroko, 77.

The words inheritance as well as family trusts have certainly been heard a lot recently in family circles. This is hardly surprising as the twins will reach the age of 86 in October.

For his part, Sir David, who divides his time between a mock Gothic castle on the tiny Channel Island of Brecqhou and Monaco, has never countenanced retirement — describing it to friends as ‘God’s waiting room’.

The reclusive Sir Frederick, on the other hand, has been, as he puts it, ‘mostly retired’ since his late 70s. He is said not to have been directly involved in the business for more than 20 years.

The next generation have, meanwhile, already become deeply embroiled in the network of family companies that extend to offshore bases in Jersey, Bermuda and the British Virgin Islands.

Sir David has four sons and nine grandchildren. The eldest Aidan, 64, — ‘my Aidan’ as Sir David refers to him — has been managing the UK businesses. Then there are Howard, 60, Duncan, 59, and Alistair, 30.

It is Aidan, Howard and Alistair, together with Aidan’s son Andrew, 28, who are the alleged parties to the bugging. They eavesdropped on their uncle, it is said in the family, because they disagreed with the way Sir Frederick was going about holding talks with potential buyers.

And crucially, their side of the family claims, because of his habit of talking to strangers whom he meets in The Ritz, where he spends much of his time when he isn’t in Monaco.

The feud has pitted cousin against cousin as well as brother against brother. As Desmond Browne QC, representing Sir Frederick and his 41-year-old daughter Amanda, told the High Court: ‘We all remember Tolstoy saying “each unhappy family is unhappy in its own way”.’

‘Here, children of Sir Frederick and Sir David have been at odds concerning the family trusts — and cousin, sadly, has been pitched against cousin.’

Indeed feud is hardly strong enough a word to describe the toxic atmosphere that separates the twins once seen as inseparable.

‘They look alike, talk alike but they are as different as chalk and cheese,’ says one family figure. ‘It’s really quite dreadful. Heaven knows how it will all end.’

The family spectacle unfolding in the High Court has all the bitterness and drama of the huge Amazon Prime hit Succession, in which members of a media empire battle over its control.