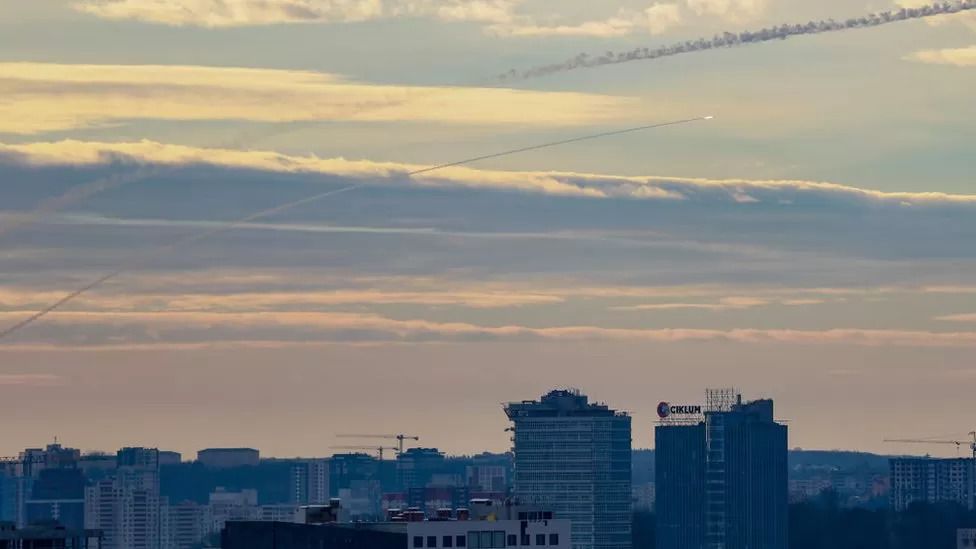 Cities across Ukraine have been targeted by a wave of Russian missile strikes, in one of the largest bombardments since the war began.

At least three people - including a 14-year-old girl - were taken to hospital after explosions hit the capital Kyiv, Mayor Vitaliy Klitschko said.

Blasts were also heard in the cities of Kharkiv, Odesa, Lviv and Zhytomyr.

Ukraine's military said 69 missiles were launched, with air defences intercepting 54 of them.

The air raid lasted for close to five hours and the regional leader of the southern province of Odesa, Maksym Marchenko, spoke of a "massive missile attack on Ukraine".

The Ukrainian Air Force said Russia attacked the country from "various directions with air and sea-based cruise missiles". It added that a number of Kamikaze drones had also been used.

Brig Gen Oleksiy Hromov said in an operational update that the strikes had been targeted at energy infrastructure across the entire country. 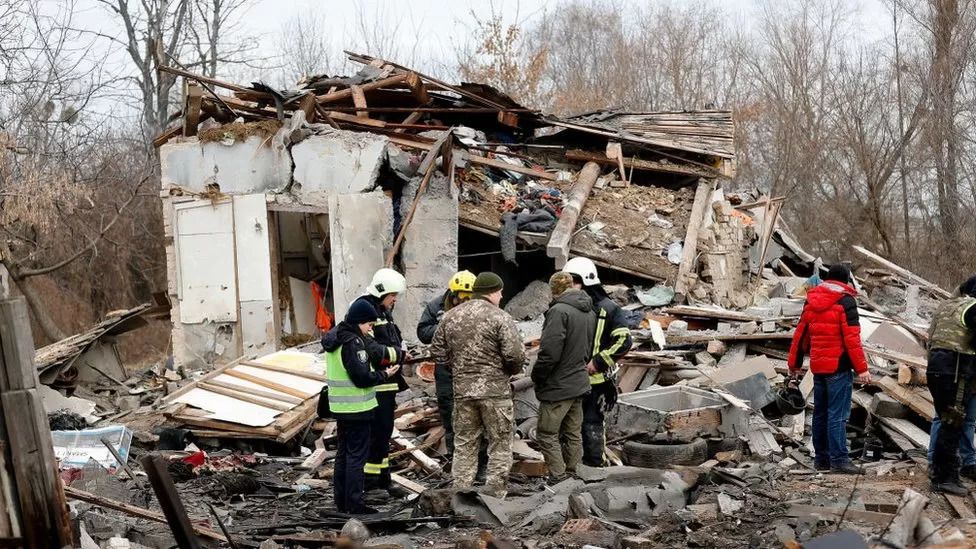 Rescue teams examine a damaged home in the Kyiv region
Two homes in Kyiv were damaged by debris from intercepted missiles, according to the city military administration. Mr Klitschko said 16 missiles were destroyed over the city by air defences.

In the southern region of Mykolaiv, Governor Vitaly Kim wrote that five missiles were intercepted by air defences, while Mayor Andriy Sadovy said several explosions had been reported in the western city of Lviv.

In the Odesa region Mr Marchenko said 21 missiles were shot down by the Ukrainian military. He added that missile fragments had hit a residential building but no casualties were reported.

And in a village in the western region of Ivano-Frankivsk, a senior adviser to President Volodymyr Zelensky said a missile had crashed into a resident's home but did not explode. The BBC cannot independently verify the report. 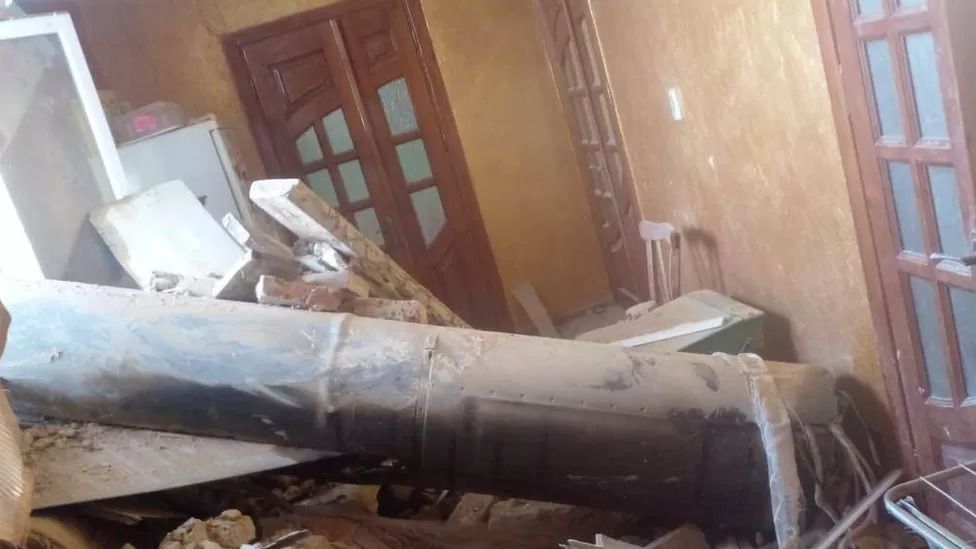 This unexploded missile struck a house in the western city of Ivano-Frankivsk, according to presidential official Kyrylo Tymoshenko

Dozens of Russian attacks have pounded Ukraine in recent weeks, causing repeated power cuts across the country. Ukraine's Energy Minister Herman Halushchenko said the latest strikes had damaged power generating facilities and said the situation was "difficult" in the Odesa and Kyiv regions.

The mayor of Lviv said on Thursday that 90% of his city was without power, while Mr Klitschko said that 40% of Kyiv had been left without power.

Power cuts were also reported in the Odesa and Dnipropetrovsk regions.

Oleksandr Vilkul, head of the Military Administration in the central city of Kryvyi Rih, said missiles fired at his city had been launched from Russian "ships and planes from the Black Sea". Power in the city had been switched off as a "precaution", he added.

Ukraine's southern command had already issued a warning that Russian forces were preparing to launch up to 20 missiles from positions in the Black Sea.

The admission followed allegations from some international leaders, including French President Emmanuel Macron, that targeting energy facilities could amount to a war crime.

In one barrage earlier this month, Ukraine said it shot down 60 of more than 70 missiles fired by Russian forces.

The government in Kyiv has pleaded with Western leaders to provide it with additional air defences, and US President Joe Biden recently agreed to supply its Patriot system.

The UK's ambassador in Kyiv, Melinda Simmons, wrote on Twitter that the attacks proved "Russia does not want peace with Ukraine. Russia wants the subjugation of Ukraine".

And Maia Sandu, president of neighbouring Moldova, condemned the strikes as "barbaric, unprovoked acts designed to bring about destruction and death".

Ukraine's intelligence chief, Kyrylo Budanov, told the BBC that Russia would continue to launch attacks on civilian infrastructure for as long as it could.

"Continuing that thought, can they do this long?" he asked, "No, because there are not many missiles left.

"The defence industry is incapable of producing enough to provide that many missile strikes. This is another reason why they are now trying to find missile weapons in other countries of the world."

Earlier this month, a senior US official told the Reuters news agency that Moscow had been forced to use decades-old ammunition with high failure rates in recent weeks.

And the UK's ambassador to the UN said Russia was attempting to obtain more weapons from Iran, including hundreds of ballistic missiles.

Dame Barbara Woodward said the UK was also "almost certain that Russia is seeking to source weaponry from North Korea [and] other heavily sanctioned states, as their own stocks palpably dwindle". 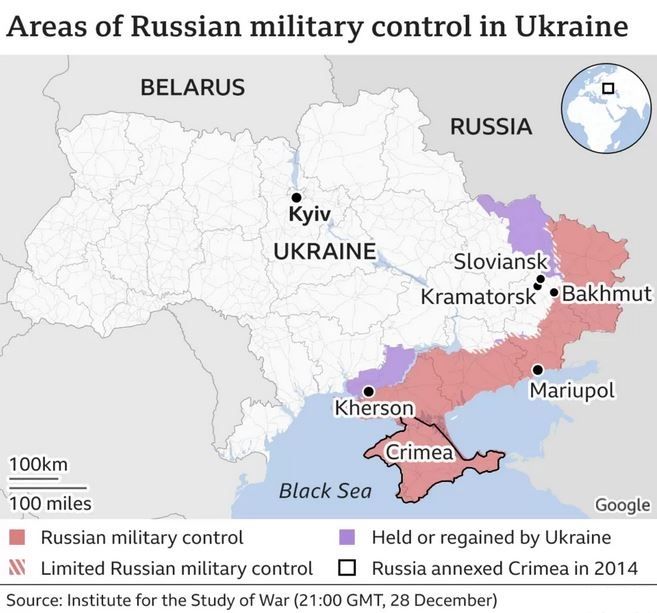