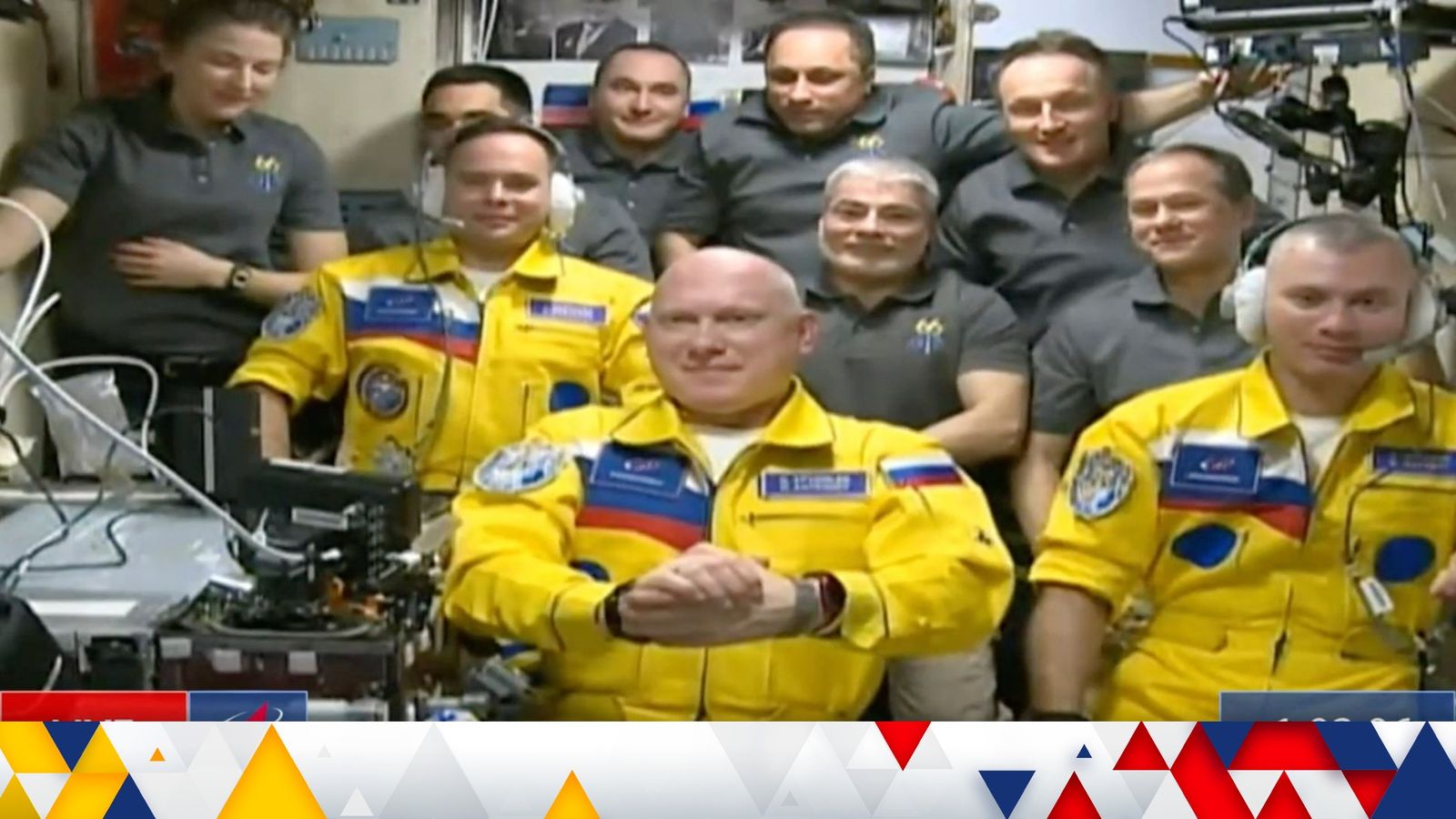 The crew said that their spacesuits were made in the colours of the Ukrainian flag because they had to use up spare yellow material.

Russian cosmonauts have boarded the International Space Station (ISS) wearing unusual yellow spacesuits, prompting speculation that the move is a quiet gesture of defiance in support of Ukraine.

The three men, Sergey Korsakov, Oleg Artemyev and Denis Matveyev, are the first to be welcomed aboard the ISS since the start of Russia's invasion of Ukraine in February.

A video of one of the men as their space capsule docked with the station showed him in a traditional light blue suit, but this was changed for another matching the colours of the Ukrainian flag before he and his colleagues actually entered.

Was it really a gesture of defiance?

Asked about the significance of the spacesuit, Mr Artemyev explained that each crew gets to choose its own flight suit to differentiate itself from others.

"It became our turn to pick a colour. But in fact, we had accumulated a lot of yellow material, so we needed to use it. So that's why we have had to wear yellow," he said.

But some have speculated that deniability may be an important quality for such a protest, given the crackdown on dissent inside of Russia.

"The flight suits of the new crew are made in the colours of the emblem of the Bauman Moscow State Technical University, which all three cosmonauts graduated from... To see the Ukrainian flag everywhere and in everything is crazy."

The men arrived at the ISS to join two fellow Russians, four Americans, and a German - but there are concerns that diplomatic fallout over the war in Ukraine could undermine the international cooperation necessary to keep it in orbit and astronauts safe.

The future of the project is likely limited. NASA has published plans which could see the 444,615kg structure taken out of orbit in January 2031 and crashed into a "spacecraft cemetery" in the remotest spot on Earth.

But following US sanctions against Russia, the country's space chief warned that Russia could completely withdraw from the project much earlier than that, although NASA scientists have not seemed overly concerned. 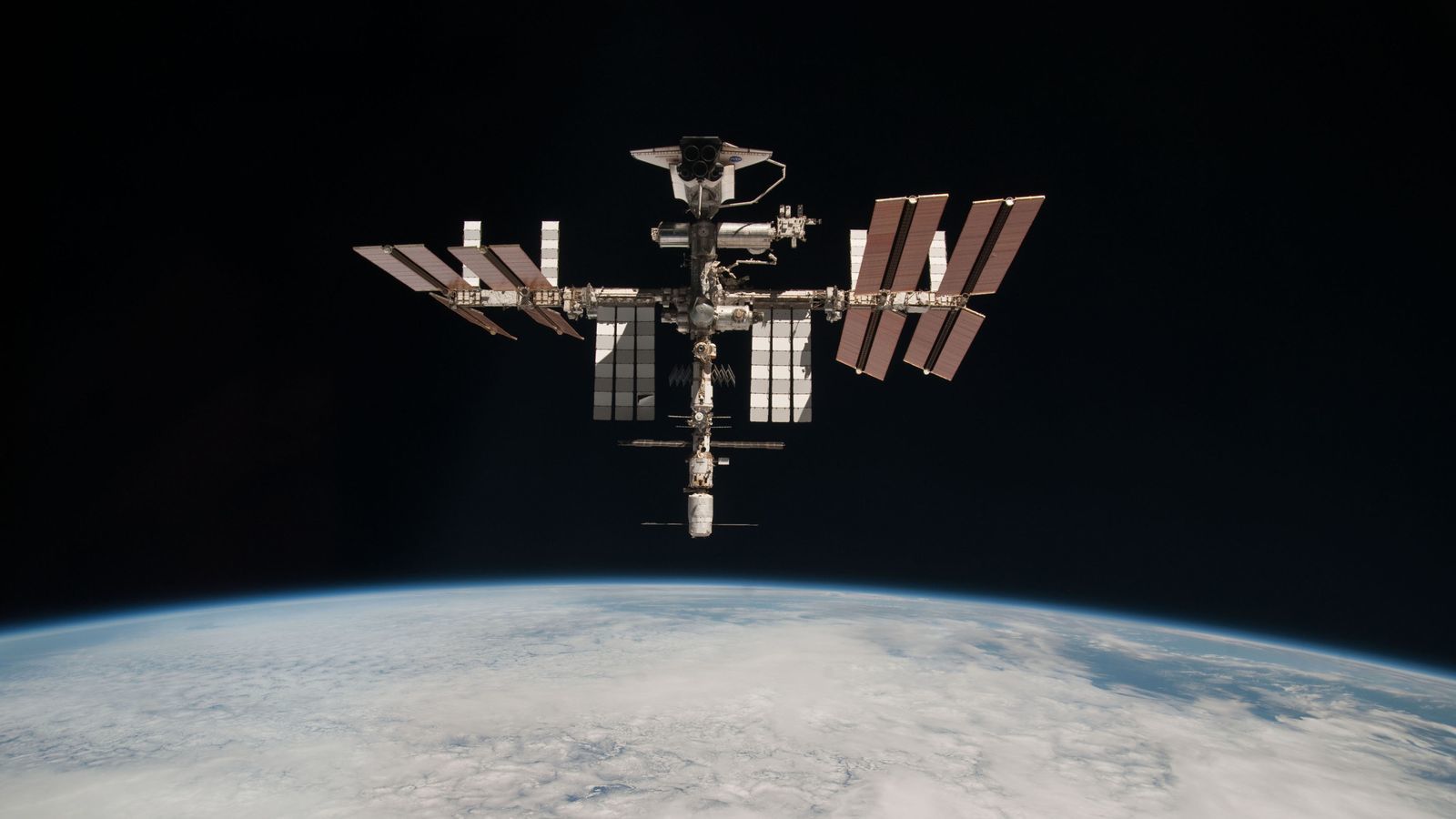 NASA says there are 'no tensions' among the ISS team

The space agency has told Sky News that despite heated exchanges and deteriorating relations back on Earth, cooperation between Russia and the US on the ISS will continue.

"There really are no tensions in the team," Joel Montalbano, programme manager for the ISS, told Sky News.

Concerns grew when the video was retweeted by the head of Russian space agency Roscosmos, Dmitry Rogozin.

It was just one of several barbed tweets sent by the Russian space chief aimed at US and European colleagues since sanctions were imposed on Russia.

"I can tell you for sure Mark is coming home on that Soyuz," Mr Montalbano told a press conference. "There's been some discussions about that, but I can tell you that all of them are coming."

Speaking to Sky News earlier this month, Juliana Suess, a research analyst at RUSI, said: "The ISS continues to operate normally for the moment.

"As such, astronauts in training in the US have not been recalled and cooperation between engineers in the respective mission control centres continues.

"A statement made by Dmitry Rogozin, head of Roscosmos, on 2 March, warned about a discontinuation of cooperation but only beyond 2024.

"A complete and sudden halt of cooperation on the ISS would be difficult to say the least, as the crew's health and operations are dependent on technologies in both segments.