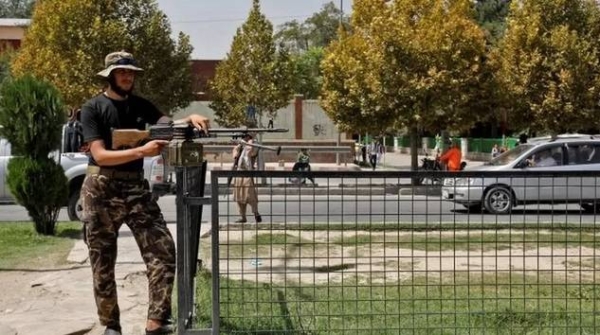 Two Russian embassy staff are among at least six people killed in a suicide bombing in the Afghan capital Kabul, Russian and Taliban officials say.
Guards shot the attacker dead as he approached the entrance to the consular section, officials said.

A number of other people are reported to have been wounded. No group has said it carried out the bombing.

The attack is the first on a foreign mission in Afghanistan since the Taliban swept to power in August 2021.

Earlier, a Taliban official said at least 10 people had been injured. Russia's state-owned news agency RIA reported that a diplomat and an embassy security guard had been wounded.

It was not immediately clear who would want to target Russia's interests in Afghanistan, or whether the bombing - the latest in a spate of attacks in Kabul and elsewhere - may have been aimed at undermining Taliban security reassurances.

It added the suicide bomber had been spotted by Taliban security personnel guarding the embassy as he approached people gathered in front of the building.

"He was identified by security and targeted, which caused a blast," the spokesman said.

Russia's foreign ministry said "an unknown militant set off an explosive device near the entrance to the consular section".

"Without any doubt, we are talking about a terrorist act, which is absolutely unacceptable," Kremlin spokesman Dmitry Peskov told reporters in Moscow.

Russia is one of the few countries to maintain a diplomatic presence in Afghanistan. Moscow does not officially recognize the Taliban's government - no country does. However, the two sides have discussed possible Afghan purchases of commodities like wheat, gas and oil from Moscow.

Violence in Afghanistan has greatly declined since the Taliban returned to power - under its 20-year campaign to drive US-led forces from Afghan soil many attacks were carried out by Taliban militants themselves.

However security has been deteriorating in recent months. A string of deadly bomb blasts have targeted mosques or minority communities, many claimed by the militant jihadist Islamic State (IS) group who see the Taliban as not radical enough.

Last week, a suicide bomber struck one of western Afghanistan's biggest mosques, killing at least 18 people, including an influential imam who supported the Taliban.
#Afghanistan