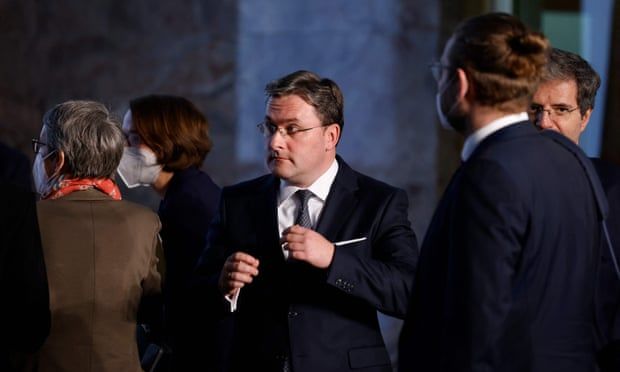 Serbia must choose between EU and Russia, says Germany

Two days before a western Balkans summit in Berlin aimed at bolstering relations with the region’s six countries, a senior German official said Serbia had to decided whether it was on the side of Moscow or the EU.

“The need for a decision is coming to a head,” said the official, who asked not to be identified. “The relationship with Serbia is complex – there is light as well as shadows. Serbia’s relations with Russia are certainly part of the shadows.”

The official said Berlin had been “surprised and disappointed” when Serbia’s foreign minister, Nikola Selaković, last month signed an agreement with his Russian counterpart, Sergei Lavrov, agreeing to consult each other on foreign policy.

Serbia, an EU accession candidate since 2012, has struggled to balance historically close ties with Russia against aspirations for integration with Europe, and tensions have been exacerbated by the war in Ukraine with many Serbs sympathetic to Russia.

The country’s president, Aleksandar Vučić, “will have support from from the EU as a whole and from the German government if he takes the path to Europe”, the official said. “Should he choose the other path, it will have ensuing consequences.”

It comes as Serbian media reported the country’s defence minister, Miloš Vučević, as saying its military had been placed on high alert because of tensions in Kosovo.

“We cannot be relaxed, and we stand for dialogue,” Vučević said, adding that the country’s army stood ready to “protect all citizens of Serbia, including the Serbs in Kosovo, and no one should doubt that”.

Kosovo last week said it was postponing a plan to confiscate cars owned by ethnic Serbs who refuse to use local car registration plates after the EU and multiple western countries warned the move would inflame ethnic tensions.

Kosovo has tried repeatedly to mandate its Serb minority to change their old plates dating back to before 1999, when Kosovo was still part of Serbia, but there has been fierce resistance by local Serbs.

The EU said on Saturday Kosovo was entitled to phase out the plates but should allow a longer transition period. Kosovo declared independence in 2008 but about 50,000 ethnic Serbs who live in the northern part refuse to recognise Pristina’s authority.

Thursday’s summit, hosted by the German chancellor, Olaf Scholz, will bring together the heads of government of Albania, Bosnia and Herzegovina, Kosovo, North Macedonia, Montenegro and Serbia as well as EU leaders to sign accords on mutual recognition of ID documents, university degrees and professional qualifications.