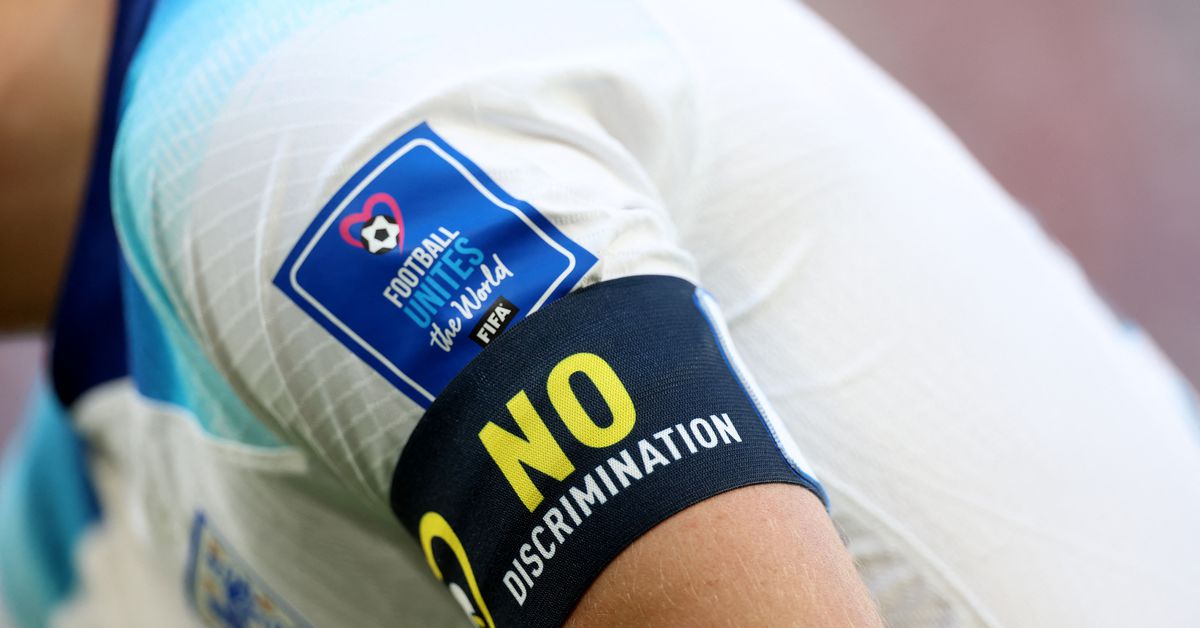 The captains of England, Wales, Belgium, the Netherlands, Switzerland, Germany and Denmark will not wear 'OneLove' armbands at the World Cup under pressure from FIFA, their associations said in a joint statement on Monday.

FIFA has threatened to issue yellow cards to any player wearing the multi-coloured armband which was introduced to support diversity and inclusion.

England captain Harry Kane spoke on Sunday of his desire to wear the armband in Monday's Group B opener against Iran.

"FIFA has been very clear that it will impose sporting sanctions if our captains wear the armbands on the field of play," the statement said, hours before England's match against Iran was due to kick off in Doha.

"As national federations, we can't put our players in a position where they could face sporting sanctions including bookings, so we have asked the captains not to attempt to wear the armbands in FIFA World Cup games."

"Their basic rights to freedom of speech & expression being crushed by FIFA."

"Today we feel betrayed. Today we feel contempt for an organisation that has shown its true values by giving the yellow card to players and the red card to tolerance."

The nations' joint statement said they were "very frustrated" by the FIFA decision which came days after president Gianni Infantino said "today I feel gay" during a long monologue aimed at media criticising the decision to host the World Cup in a country where homosexuality remains illegal.

"We believe (the decision) is unprecedented -- we wrote to FIFA in September informing them of our wish to wear the One Love armband to actively support inclusion in football, and had no response," the statement said.

"Our players and coaches are disappointed -- they are strong supporters of inclusion and will show support in other ways."

German Football Association president Bernd Neuendorf said that although FIFA's decision was unprecedented, it was unfair for the players to shoulder the responsibility for any potential consequences if they decided to wear it anyway.

"We are witnessing a case with no precedent in World Cup history," Neuendorf said. "I will not carry the confrontation created by FIFA onto the back of (Germany team captain) Manuel Neuer."

The German FA is the world's largest federation with more than seven million active members.

Amnesty International said FIFA was failing to uphold its own values and responsibilities.

"Sport does not happen in a vacuum and these are issues on which FIFA should be leading, not cracking down on," said Steve Cockburn, Amnesty's Head of Economic and Social Justice.

"Agreements on armbands, and better protections for LGBTI communities, should have been reached a long time ago. We applaud the courage of teams and players who have spoken out about human rights and we hope they continue to do so."

Wales captain Gareth Bale had been planning to wear the OneLove armband against the United States later on Monday as had Dutch skipper Virgil van Dijk. Germany's Neuer had said days ago he would wear it in Wednesday's game against Japan.

The Dutch FA said it had taken the decision with a heavy heart ahead of the Netherlands match against Senegal on Monday.

"You don't want the captain to start the match with a yellow card. That is why it is with a heavy heart that we as a UEFA working group ... and as a team had to decide to abandon our plan," the KNVB said in a statement.

"This is completely against the spirit of our sport, which unites millions of people.

"Together with other countries involved we will critically look at our relation with FIFA."

FIFA launched its own captain's armband campaign ahead of the tournament to promote different causes for each round.

On Monday it said had brought forward its own "No Discrimination" from the planned quarter-finals stage in order that all 32 captains will have the opportunity to wear its own armband during the tournament.

"This is in line with Article 13.8.1 of the FIFA Equipment Regulations, which state: 'For FIFA Final Competitions, the captain of each Team must wear the captain's armband provided by FIFA'," the world governing body said in a statement.

According to FIFA rules, team equipment must not have any political, religious or personal slogans, statements or images, and during FIFA Final Competitions, the captain of each team "must wear the captain's armband provided by FIFA".

"Wear it skipper. Take everything thrown at you. It's about more than football," he said on Twitter.

England confirmed on Sunday they will take the knee before kickoff, a ritual they have observed to support equality and anti-racism messages.