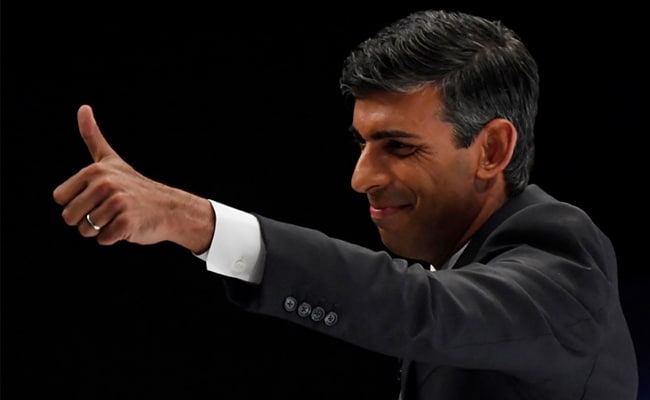 This Is How Rishi Sunak Wants To Change UK-India Relationship

A majority in the cheering crowd were categorical thatMr Sunak's Indian heritage and ethnic minority background had no part to play in the contest to become British Prime Minister.
Rishi Sunak, who is set to be Britain's first Indian-origin prime minister, recently said that he wants to change the UK-India relationship to make it a more two-way exchange that opens up easy access to UK students and companies in India.

Addressing a gathering of British Indian Conservative Party members in August, the 42-year-old UK-born Indian-origin Tory MP for Richmond in Yorkshire vowed to get the country through the “difficult times” of inflation and build a better, safer Britain.

A majority in the cheering crowd were categorical that Mr Sunak's Indian heritage and ethnic minority background had no part to play in the contest to become British Prime Minister.

During an event hosted by the Conservative Friends of India (CFIN) diaspora organisation in north London, the former Chancellor greeted the gathering with a mix of traditional greetings such as “namaste, salaam, khem cho and kidda” and even broke into Hindi: “aap sab mere parivar ho (you all are my family)".

"We know the UK-India relationship is important. We represent the living bridge between our two countries,” he said, in response to a question about bilateral ties from CFIN co-chair Reena Ranger.

"We are all very aware of the opportunity for the UK to sell things and do things in India, but actually we need to look at that relationship differently because there is an enormous amount that we here in the UK can learn from India.

The UK-born son of Indian-origin general practitioner father Yashvir and pharmacist mother Usha had spoken extensively of his migrant roots during the last campaign and also referenced making history by lighting Diwali diyas at 11 Downing Street as the first Indian-origin Chancellor of the Exchequer.

"Sixty years after my Naniji boarded a plane in East Africa, on a warm sunny evening in October, her great-grandaughters, my kids, played in the street outside our home, painted Rangoli on the doorstep, lit sparklers and diyas; had fun like so many other families on Diwali. Except the street was Downing Street, and the door was the door to No. 11,” said Mr Sunak, in his campaign video a few months ago.

That personal story also extended to a visibly emotional reference to his parents-in-law - Infosys co-founder Narayana Murthy and Sudha Murthy - as he hit back at attacks on his wife Akshata Murthy's family wealth.

"I'm actually incredibly proud of what my parents-in-law built,” he said, during heated television debates over the past few months.

As a devout Hindu, Rishi Sunak is a regular at the temple where he was born in Southampton and his daughters, Anoushka and Krishna, are also rooted in the Indian culture.

He recently shared how Anoushka performed Kuchipudi with her classmates for the Queen's Platinum Jubilee celebrations at Westminster Abbey in June.