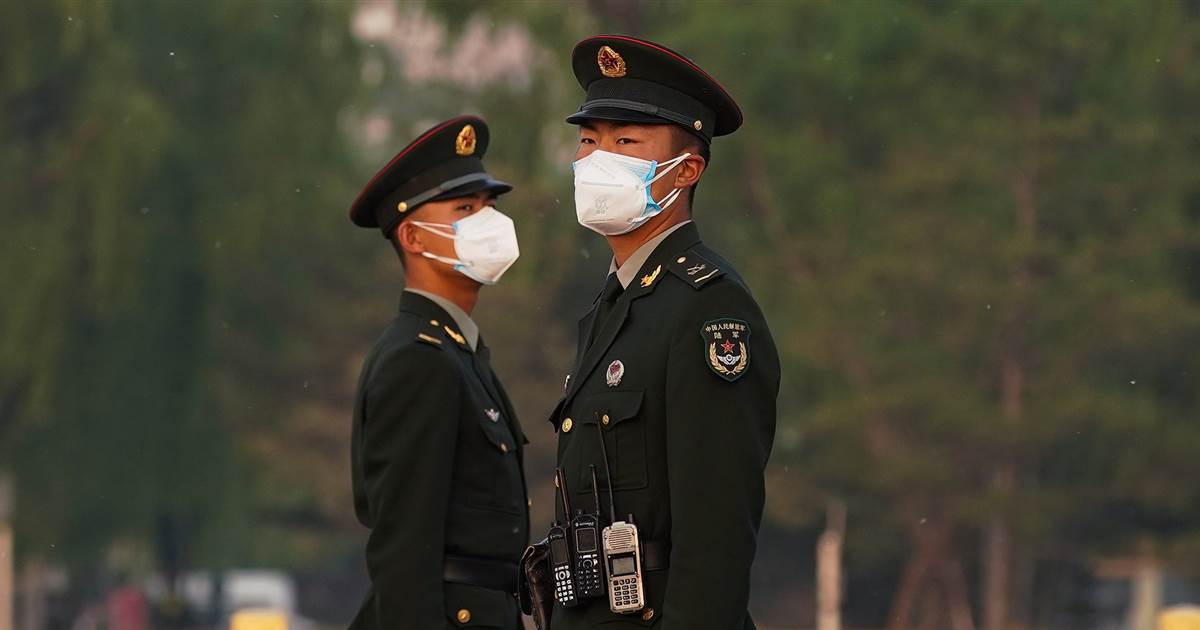 A specific "tasking" seeking information about the outbreak's early days was sent last week to the Defense Intelligence Agency. The CIA got similar instructions.
The White House has ordered intelligence agencies to comb through communications intercepts, human source reporting, satellite imagery and other data to establish whether China and the World Health Organization initially hid what they knew about the emerging coronavirus pandemic, current and former U.S. officials familiar with the matter told NBC News.

A specific "tasking" seeking information about the outbreak's early days was sent last week to the National Security Agency and the Defense Intelligence Agency, which includes the National Center for Medical Intelligence, an official directly familiar with the matter said. The CIA has received similar instructions, according to current and former officials familiar with the matter.

"It's coming in and I'm getting pieces already," he said. "And we're not happy about it, and we are by far the largest contributor to WHO, World Health. And they misled us...Right now, they're literally a pipe organ for China. That's the way I view it. So we're seeing and we're looking and we're watching."

WHO officials have said they gave the world enough time to respond to their early warnings about the coronavirus. Chinese officials have criticized what they describe as a delayed response by Trump.

As part of the tasking, intelligence agencies were asked to determine what the WHO knew about two research labs studying coronaviruses in the Chinese city of Wuhan, where the virus was first observed. NBC News has previously reported that the spy agencies have been investigating the possibility that the virus escaped accidentally from one of the labs, although many experts believe that is unlikely.

The move coincides with a public effort by the White House, Secretary of State Mike Pompeo and Trump's political allies to focus attention on China's inability to contain the virus shortly after it emerged. As NBC News previously reported, U.S. intelligence officials have said China initially failed to disclose the seriousness of the outbreak, robbing the rest of the world of information that might have led to earlier containment efforts.

"As the president has said, the United States is thoroughly investigating this matter," White House spokesman Hogan Gidley said. "Understanding the origins of the virus is important to help the world respond to this pandemic but also to inform rapid-response efforts to future infectious disease outbreaks."

The CIA and DIA declined to comment. An official from the Office of the Director of National Intelligence said, "We are not aware of any such tasking from the White House."

Trump has shifted from initially praising China's handling of the outbreak to sharply criticizing it as the threat the pandemic poses to the U.S. economy and his re-election prospects has crystallized. Blaming China for America's economic struggles has proven effective for Trump with his political base, and his allies believe it's a message that could resonate in November with voters in the Midwest.

"The president is now running against China as much as anyone," said a person close to the president.

The Trump administration has also accused the WHO of erring in January when it reported no evidence of human-to-human transmission. Trump, alleging that China exercised undue influence over the agency, has suspended U.S. funding of the WHO.

Initially, the WHO used conservative language. In a statement about the disease on Jan. 14 — regarding the first case outside China, in Thailand — the WHO said, "There is no clear evidence of human-to-human transmission."

The agency soon stopped saying that, and by mid-January it was clear that the virus was spreading well beyond China.

Critics see the White House focus on China and the WHO as an effort to distract attention from the open question of what warnings Trump got in January and February from his own health and intelligence advisers during a time when he was downplaying the severity of the virus.

The Washington Post reported Monday that the intelligence reporting and analysis about the pandemic appeared in the president's daily intelligence brief more than a dozen times, although the newspaper did not specifically describe what information was passed along.

An administration official confirmed to NBC News that the President's Daily Brief, or PDB, included more than a dozen mentions in January and February of U.S. intelligence about the coronavirus in China, as well as Beijing's attempts to cover it up and suppress information about it.

The official played down the significance of the intelligence, saying there was not much more detail in the briefings than what was in the public domain. The official also said the briefings did not include any warning about how widespread and deadly the virus has now become around the globe.

An ODNI official told NBC News that “details in the Washington Post story are not true,” but declined to say what specifically is disputed, citing the highly classified nature of the PDB.

Asked Tuesday to clarify what intelligence officials were telling him in January and February, the president said, "I would have to check."

"I want to look to the exact dates of warnings," he said.

NBC News has reported that U.S. intelligence agencies saw early warning signs of a health crisis in Wuhan as far back as November and that the National Center for Medical Intelligence predicted that the coronavirus would cause a global pandemic in February, well before the WHO declared one.

The committees typically are not granted access to the PDB, the officials said. The congressionally sponsored commission that investigated the terrorist attacks of Sept. 11, 2001, was allowed to review presidential briefs and determined that President George W. Bush was warned in the summer of 2001 that Osama bin Laden was "determined to strike" inside the United States.