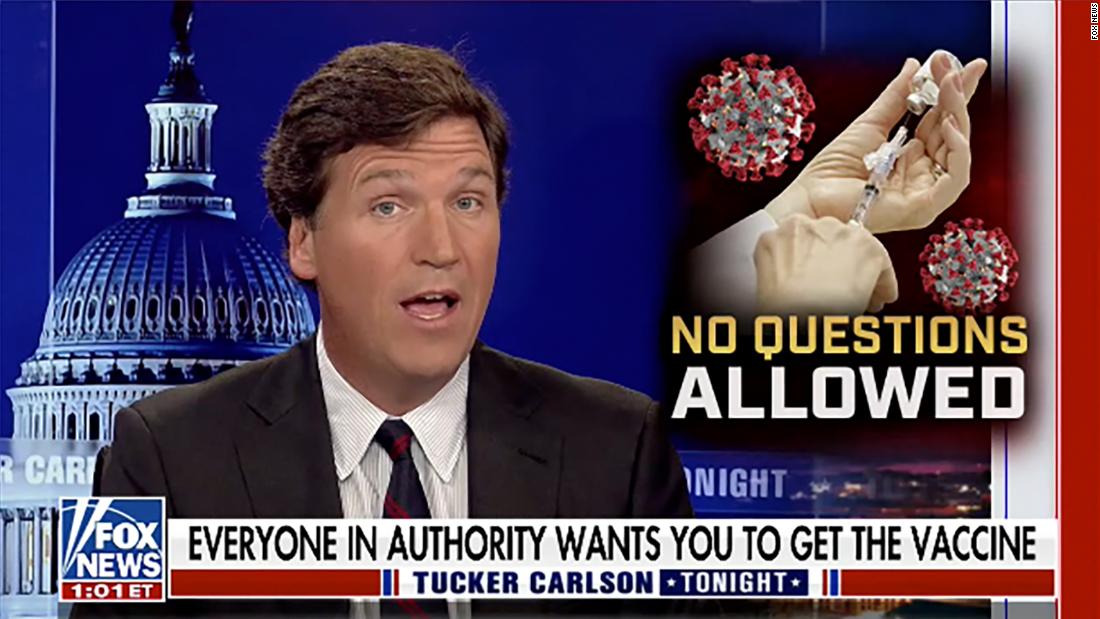 Some of Tucker Carlson's colleagues at Fox News are objecting to his reckless anti-vaccination rhetoric. They are speaking out in small ways on Twitter -- but they are not being given the prime time platform that Carlson enjoys, and the millions of people who watch Carlson are not being given accurate information about the Covid vaccines.

On Wednesday night at least three Fox commentators, both conservatives and liberals, posted messages that rebutted Carlson's fear-mongering about the vaccines.

Carlson claimed to be asking a simple question: "How many Americans have died after taking the COVID vaccines?" But his speculative monologue was so deeply misleading that it stirred widespread condemnation. Numerous doctors spoke out on social media and said his comments were dangerous.

The 15-minute monologue began with an on-screen banner that said "EVERYONE IN AUTHORITY WANTS YOU TO GET YOUR VACCINE," and it went downhill from there.

Carlson cited data from a federal database called VAERS, short for Vaccine Adverse Event Reporting System, to insinuate that the Covid-19 vaccines are problematic. Though he wants his viewers to believe he offers some unique, hidden truths every night, the fact is this is an old, worn-out tactic used by anti-vaccine advocates, who pretend that correlation is causation.

The vaccines are actually incredibly safe and effective. "Millions of people in the United States have received COVID-19 vaccines under the most intense safety monitoring in U.S. history," the CDC notes.

(Of course, Carlson routinely and cynically argues that sources like the CDC and CNN cannot be trusted.)

As for VAERS, the database is an "early warning system" full of self-reported info, not verified accounts of adverse events. The CDC is clear that "reports to VAERS of death following vaccination do not necessarily mean the vaccine caused the death."

Common sense dictates that when tens of millions of people receive a vaccine, some of them will die in the following months from all sorts of causes that have nothing to do with a vaccine. It's an inescapable fact of life.

Unfortunately, anti-vaccination propagandists have been trying to make such a link. PolitiFact recently called the database, which does have an important purpose when used by people who actually care about science and truth, "a breeding ground for misinformation."

In response, Dr. Nicole Saphier, a Fox News medical contributor who has been one of the network's most prominent expert voices during the pandemic, tweeted: "It's intriguing the people who claim Covid deaths were overinflated from concomitant illness are the same people who are saying people dying after the vaccine are dying from the vaccine and not because we vaccinated the most elderly, frail, sick individuals with short life spans."

Openly mocking Carlson, he wrote, "FACT: Every single person who ever died blinked before they died. The vast majority — like 99% — blinked mere seconds before death. And yet, no one talks about this silent killer."

Fox's Jesse Watters also posted a pro-vaccination message while Carlson was still mid-rant, but it didn't appear to be a subtweet of Carlson.

It almost goes without saying that an individual tweet has a tiny fraction of the audience of "Tucker Carlson Tonight." Carlson reaches more than three million viewers a night. And none of his in-house critics have had an opportunity to speak about it on Fox's airwaves.

Carlson often claims on the air that he is pro-vaccine. That's partly how Fox excuses his conspiratorial content. A spokeswoman for the network declined to comment on whether Carlson's newest claims would be fact-checked or rebutted on the air.