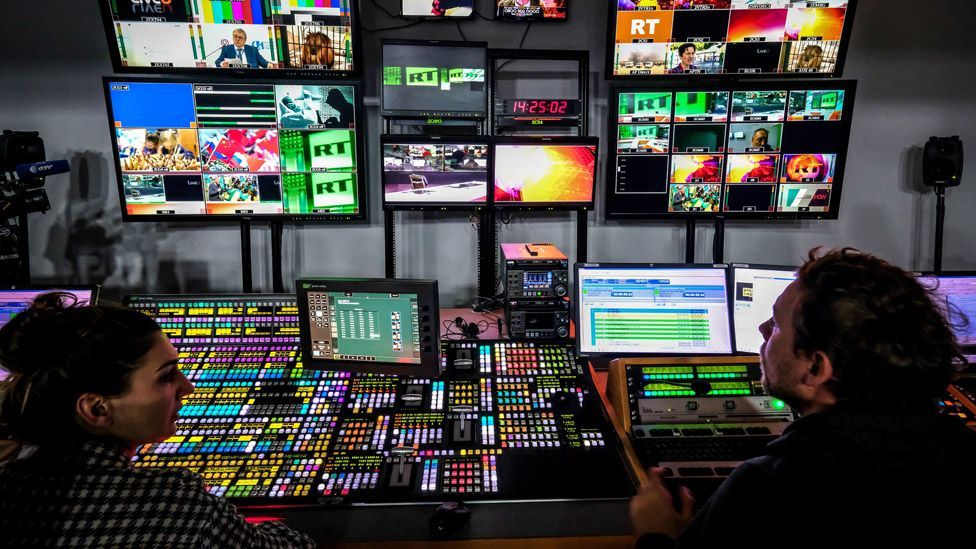 The government has asked media watchdog Ofcom to review the Russia Today (RT) news channel's broadcasts in the UK.

"It is essential that the UK looks to limit Russia's ability to spread their propaganda at home," she said.

Ofcom said it has "already stepped up our oversight of coverage" of the crisis by broadcasters in the UK.

The Russian foreign ministry said it would take retaliatory steps against British journalists if the UK restricts Russian media.

The Kremlin-backed channel, which is available to millions of homes in the UK, said the UK government was interfering in institutions like Ofcom that were supposedly free from political pressure.

In the House of Commons on Wednesday, Labour leader Sir Keir Starmer described the channel as the "personal propaganda tool" of Russian President Vladimir Putin, and called on Boris Johnson to review its licence.

The prime minister replied that the culture secretary "has already asked Ofcom to review that matter".

He added: "But what I will say is that we live in a in a democracy, and we live in a country that believes in in free speech. And I think it's important that we should leave it up to Ofcom rather than to politicians to decide which media organisations to ban. That's what Russia does."

In her letter to the regulator, Ms Dorries said she was concerned that the channel would "look to spread harmful disinformation about the ongoing crisis in Ukraine here in the UK". 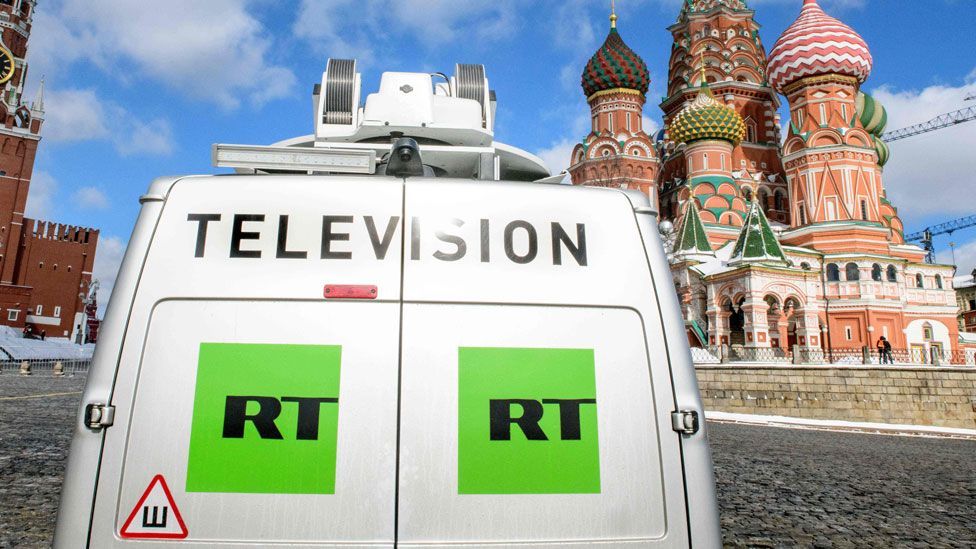 Ofcom chief executive Dame Melanie Dawes replied: "Recognising the serious nature of the crisis in Ukraine, we have been keeping the situation under close review and have already stepped up our oversight of coverage of these events by broadcasters in the UK.

"We are expediting complaints in this area as a matter of urgency and we will not hesitate to take swift action where necessary. I am confident that we have the full range of enforcement tools at our disposal and our track record shows that when we find a breach of our rules, we can and do take action."

In 2019, Ofcom fined RT £200,000 for "a serious breach" of impartiality rules in its reporting of the Salisbury poisonings and the conflict in Syria.

The channel claimed Ofcom's decisions were "a disproportionate interference with RT's right to freedom of expression".

The Russian broadcaster is widely seen as a mouthpiece for the Kremlin and was taken off the air in Latvia and Lithuania in 2020. Its German outlet RT DE was banned earlier this month because German regulators said it did not have an EU licence.

In the digital age, information is super-abundant. Cyber war, misinformation and propaganda have never been more prevalent. This puts huge strain on the commitment liberal democracies feel toward the principle of free speech - something the prime minister, a former journalist, reiterated today.

For Ofcom, the question is whether the heightened importance of winning hearts and minds on either side of the Ukraine conflict means RT is unfit to broadcast. RT's track record is clear.

For Britain, a judgement needs to be made on the issue of harm. Allowing RT to propagandise on Russia's behalf keeps Britain on the moral high ground and upholds a key democratic principle - the right of people to say what you do not want to hear. Taking RT off air would also provoke retaliation.

But misinformation has consequences. Ofcom is independent, but doesn't exist in a political vacuum. The culture secretary's letter gives Ofcom political cover for a strong intervention.

RT says it is an "autonomous" operation financed by the Russian Federation. It is available in the UK via Freeview and subscription services, and also broadcasts in more than 100 countries.

Its presenters include former SNP leader Alex Salmond. On Wednesday, Scottish First Minister Nicola Sturgeon said she was "appalled" that her predecessor still hosts a talk show on the channel.

Media relations have been a source of tension between the Russia and Western countries in recent months.

Last August, BBC correspondent Sarah Rainsford was forced to leave Russia when her visa was not renewed, with Moscow authorities saying Russian journalists had been denied UK visas.

In December, German media authorities said RT's German-language branch could not operate in the country because it didn't have the proper licence.

That led Russia to shut the Moscow bureau of German broadcaster Deutsche Welle.