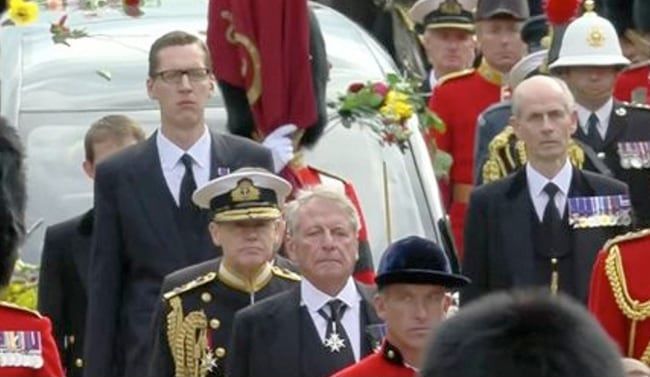 When the world was glued to the funeral of the Queen Elizabeth II, one mourner stood out in the procession for being unusually tall. The man wearing a black suit who was moving in front of the Queen's casket astonished everyone. Many pleaded for information on his identity as he towered over troops and sailors in the procession.

The tall man was Matthew Magee, the late Queen's former assistant private secretary. The Queen was just 5 feet 3 inches tall, whereas he was 7 feet 2 inches tall. He was put in the position in 2018, and people frequently thought he was a royal protection officer. Prior to this, Mr. Magee served as the personal secretary to the Duke of Kent, Prince Edward.

Because of his height, Mr. Magee has become a social media celebrity. Many users were interested in learning more about him.

One Twitter user wrote: "Who is this insanely tall man? Is this the royal Slenderman?" Slenderman is a character from a horror video game.

A different user of social media added: 'Anyone know who the exceedingly tall man is?'

One person asked, 'Did they bring in the tallest man in the world for the occasion?'

One royal spectator wanted to clarify something, wrote: "If anyone else is as curious as I am, the very tall man in front of the hearse in the Queen's procession is Matthew Magee, her 7'2" private security."

However, Britain said farewell to Queen Elizabeth II on Monday at a historic state funeral attended by world leaders and a ceremonial journey past hundreds of thousands of mourners to her final place of rest.

Huge crowds gathered in London to watch as the queen's flag-draped coffin, topped with the Imperial State Crown, her orb and sceptre, was carried slowly to a gun carriage from parliament's Westminster Hall, where it had lain in state since Wednesday.

To the tune of pipes and drums, the gun carriage used at every state funeral since Queen Victoria's in 1901 was then drawn by 142 junior enlisted sailors in the Royal Navy to Westminster Abbey.

The thousand-year-old church's tenor bell tolled 96 times at one-minute intervals, one for every year of her life, and stopped a minute before the service began at 11:00 am (1000 GMT).

In his funeral sermon, Archbishop of Canterbury Justin Welby praised the queen's life of duty and service to the UK and the Commonwealth.