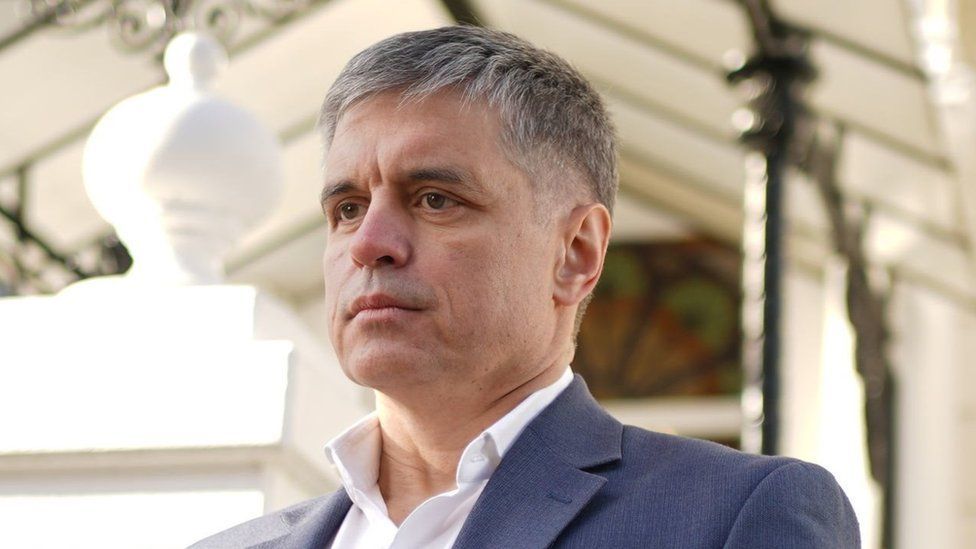 Ukraine's UK ambassador has said his own wife faced delays getting a visa when he got the role, as he criticised the "bureaucratic" British system.

Vadym Prystaiko told a committee of MPs that issues with getting UK visas for Ukrainians had existed before the war.

He appealed to MPs to drop visa rules for a limited period to allow refugees to get out of the country.

The Home Office has come under pressure to speed up visa processing after it emerged just 760 had been issued.

Transport Secretary Grant Shapps said the UK was stepping up the pace of admissions for Ukrainians.

Appearing before the Home Affairs Committee, Mr Prystaiko was asked about the difficulties Ukrainians have faced in securing visas to come to the UK - even when they are eligible.

The ambassador said there had always been "bureaucratic hassles" involved with applying for UK visas, even before the conflict with Russia sparked a refugee crisis.

He revealed that, prior to the war, which began last month, his own wife was initially unable to get a visa to join him, despite him being his nation's representative in the UK.

Previously, Ukrainians had to get UK visas from a centre in Kyiv, he said, but this was then moved to Poland and then to the UK itself.

"To process visas, it was always bureaucratic," he said. "Even when I was coming here as ambassador, I got my visa on time [but] although I was already approved by your government, my wife didn't have [hers].

"So even [with] simple things like that, [the] bureaucracy is so tough."

Mr Prystaiko said more than seven million people have now been displaced as a result of the war with Russia.

The ambassador told MPs he knew immigration was a "very sensitive" issue in the UK, and any changes were "frankly for you to decide".

But he called for visa requirements to be dropped for "some period of time" to allow the maximum number of Ukrainians into Britain, pledging that his embassy will help deal with any influx.

However, he said he does not expect "many of them to come", adding that most departing Ukrainians want to remain close to their homeland, such as in Poland or Slovakia, where there is less of a language barrier.

Speaking later on BBC's Question Time, he said he understood checks were needed but pointed out that most Ukrainian men were staying behind to fight so most of those trying to get into the UK were women with children.

"I hope they're not posing any terrorist threat to the UK," he said.

The UK government has promised a visa pop-up centre in northern France to help process the Ukrainian refugees looking to seek sanctuary in Britain.

On Wednesday afternoon, the mayor's office in Calais told the BBC 87 Ukrainian refugees were taken by bus to Lille to be processed at a "pop-up" centre.

The coaches were heading for an undisclosed location on the outskirts of the city, according to a separate source, and the refugees were taken there by invitation only.

Conservative MP Tim Loughton, who sits on the Home Affairs Committee, expressed frustration with the Home Office over visa delays, accusing the department of being "rather slow".

He added: "Some of us would like the home secretary to send some planes… and bring back planeloads of mostly mums with young children, and then sort out the bureaucracy and the paperwork in the UK".

The ambassador reiterated Ukraine's appeal for Nato to introduce a no-fly zone over the country, replying: "If you want to send planes, send F16s."