The images created a buzz on social media, with many users calling the digital cover "beautiful" and a "powerful image".

Ukraine President Volodymyr Zelensky and his wife Olena Zelenska have posed for the cover story of Vogue magazine, in which the couple discussed their nearly two decade of marriage, shared history and spending time without their children who have to be separated due to Russia's ongoing invasion of the country. Both the President and the First Lady spoke to Vogue team in Kyiv, in an in-person interview. The war in Ukraine has been going on for more than 150 days and claimed lives of thousands of people.

Vogue has also posted the image of Ms Zelenska as its latest digital cover star, calling it "portrait of bravery", in which the Ukrainian First Lady is sitting inside the presidential office and dressed casually in black pants and white top. She has also posed for photographs along soldiers and wreckage in other images released by Vogue on its Instagram handle.

"As the war in Ukraine enters a critical new phase, the country's First Lady, Olena Zelenska, has become a key player - a frontline diplomat and the face of her nation's emotional toll," Vogue said on its Instagram handle.

Speaking to the magazine, Ms Zelenska said she met her future husband in high school in their hometown of Kryvyi Rih in southeast Ukraine. They began dating while at university and formed a satirical troupe.

Vogue said that her full profile will be available in October issue.

The images created a buzz on social media, with many users calling the digital cover "beautiful" and a "powerful image". Others, however, criticised the couple for posing for a magazine at a time when their country is ravaged by war.

"During a way, you either shoot your opponent or get shot...by Vogue," a Twitter user commented. "Priorities. I'm sure the dudes in the trenches appreciate the effort the Zelensky's are putting into stopping the war. A Vogue cover will help, for sure. Slava Ukraini," tweeted another.

The Russian forces are currently concentrating their efforts to capture territory in southern part of Ukraine. 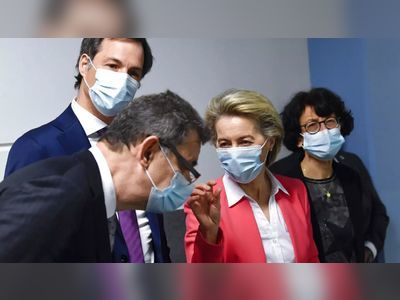