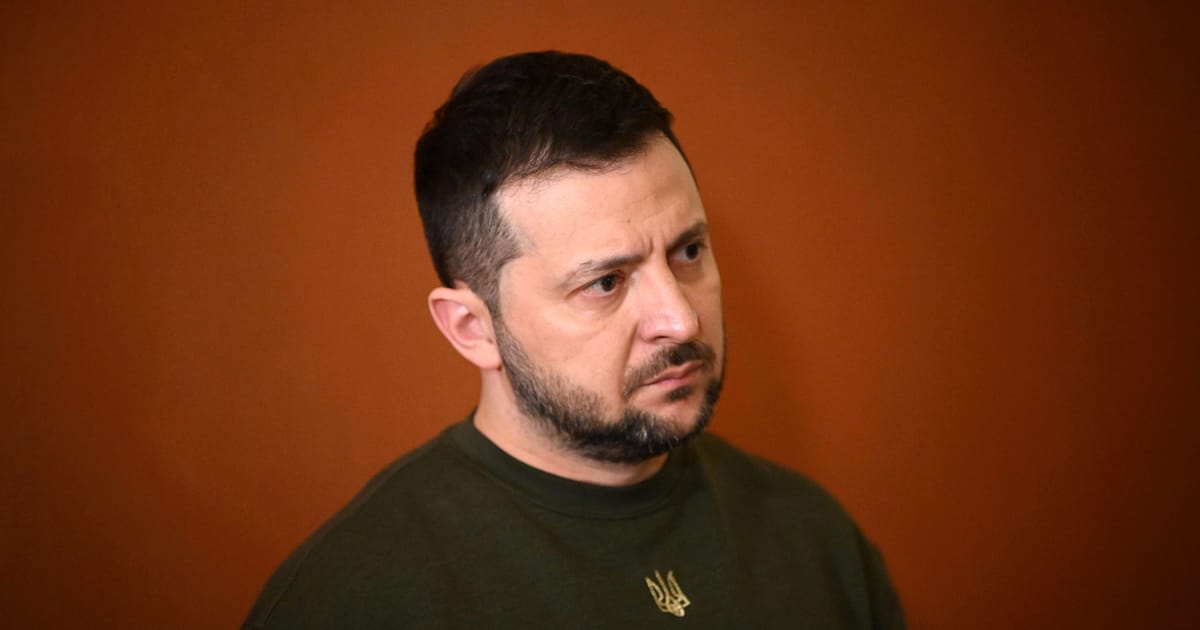 President Volodymyr Zelenskyy is adamant that his country’s future is in the EU, but is under pressure over Constitutional Court reforms.

Even when the Russians are invading your country, that doesn’t stop the clock when it comes to sweeping out corruption and fixing the judiciary in line with EU convergence criteria.

With the EU set to issue reports on Kyiv’s progress in March and then again in October, Ukraine’s advances on rule of law are swifter than expected, but it’s a case of two steps forward and one (very worrying) step back.

For Ukrainian President Volodymyr Zelenskyy, who has declared that his country’s “future is in the EU,” it is vital to maintain momentum, when he knows Kyiv’s membership faces resistance from traditional EU members, whose powers would be diluted by such a big new member. France’s President Emmanuel Macron said in May that Kyiv was “in all likelihood decades” from EU membership, and Western European countries express constant concerns about insecurity, corruption and the cost of rebuilding a nation shattered by war.

In that context, Ukraine is now moving surprisingly quickly. The appointment of a new chief prosecutor has given the fight against graft a boost with many high-profile cases finally resulting in sentences. The Ukrainian parliament also liquidated the Kyiv Administrative District Court, infamous as the most corrupt court in Ukraine.

On the downside, however, concern is now growing over the Constitutional Court, with its supreme legal oversight that can overrule government decisions. A new reform threatens to allow political interference in a body that would filter candidates for judges. This could throw a major hurdle in the path of Ukraine’s European aspirations. Both the European Commission and the Venice Commission, a Council of Europe advisory body on constitutional law, have already sounded the alarm.

Ukraine’s liquidation of the Kyiv Administrative District Court is being widely viewed as one of the most positive steps in the battle against corruption, but it didn’t come easily.

Zelenskyy submitted the bill to kill off the court as a priority back in April 2021. However, the Ukrainian parliament did so only on December 13, four days after the U.S. Department of State sanctioned its chairman, Pavlo Vovk, for soliciting bribes in return for interfering in judicial and other public processes.

The U.S. sanction on the court’s head judge was the final straw, said Mykhailo Zhernakov, chairman of the board of the Dejure Foundation, a nongovernmental organization focusing on legal reform.

But Vovk’s removal was also the fruit of intense pressure from Ukrainian civil society groups that exposed the court’s misdeeds and anti-corruption organizations that investigated its lead judges.

In 2020, the National Anti-Corruption Bureau of Ukraine (NABU) released the so-called Vovk tapes — wiretaps of both Administrative Court judges and top lawyers in connection to a criminal case against Vovk — which revealed a large number of fake lawsuits, unlawful rulings and pressure by Vovk on judges and officials.

“What made the Kyiv Administrative District Court so powerful was its unique jurisdiction that covered not only local authorities of Kyiv, but also all the government bodies located in Kyiv. And that means all government bodies,” Zhernakov said. “That broad jurisdiction gave them an enormous concentration of power. And that is why it must be divided with the creation of the new administrative court.” 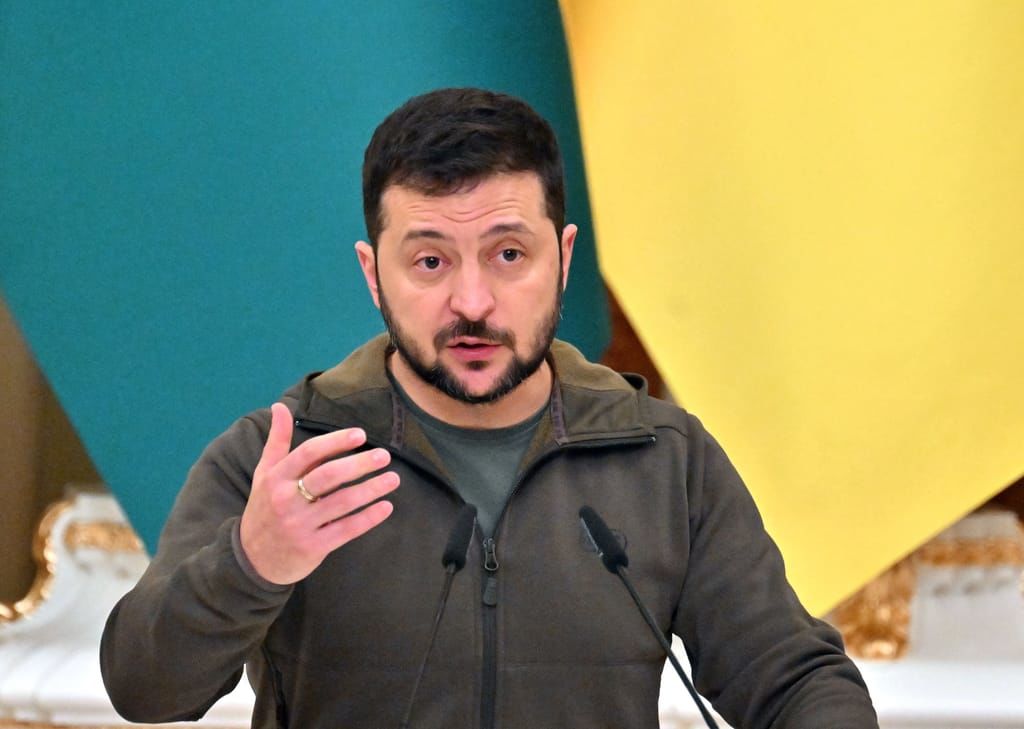 Ukrainian President Volodymyr Zelensky
After the tapes were published by local investigative journalists, the public got an insight into massive obstruction of justice and bribery flourishing at the highest level. All of the judges and officials identified on the tapes deny their authenticity to this day, however.

Vovk himself called the liquidation of the court “a rushed decision” by parliament, adopted under pressure from “certain activists and lobbyists groups.” British Ambassador Melinda Simmons, by contrast, called it a “good day for judicial reform.”

Rostyslav Kravets, a lawyer defending many Ukrainian judges, said the accusations against Vovk were all fabricated and slammed the court reform as “backed by foreign forces.”

“This is wrong. Can you imagine me coming to London to help them elect judges?” Kravets said. “Europe has been trying to sell the idea that all judges in Ukraine are criminals, who take bribes. That forced many to leave their posts or rule in favor of unlawful decisions.”

The second major advance has come with the appointment of Oleksandr Klymenko as the chief anti-corruption prosecutor.

In 2021, the notorious Kyiv Administrative District Court blocked the appointment of the former detective from the NABU anti-corruption bureau. Klymenko became famous for investigating a bribery case against another top official in Zelenskyy’s administration: Oleg Tatarov, deputy head of the president’s office. Although Tatarov was charged with bribery, his case was transferred from the jurisdiction of independent anti-corruption bodies to the security service of Ukraine. Shortly afterward, the case died. 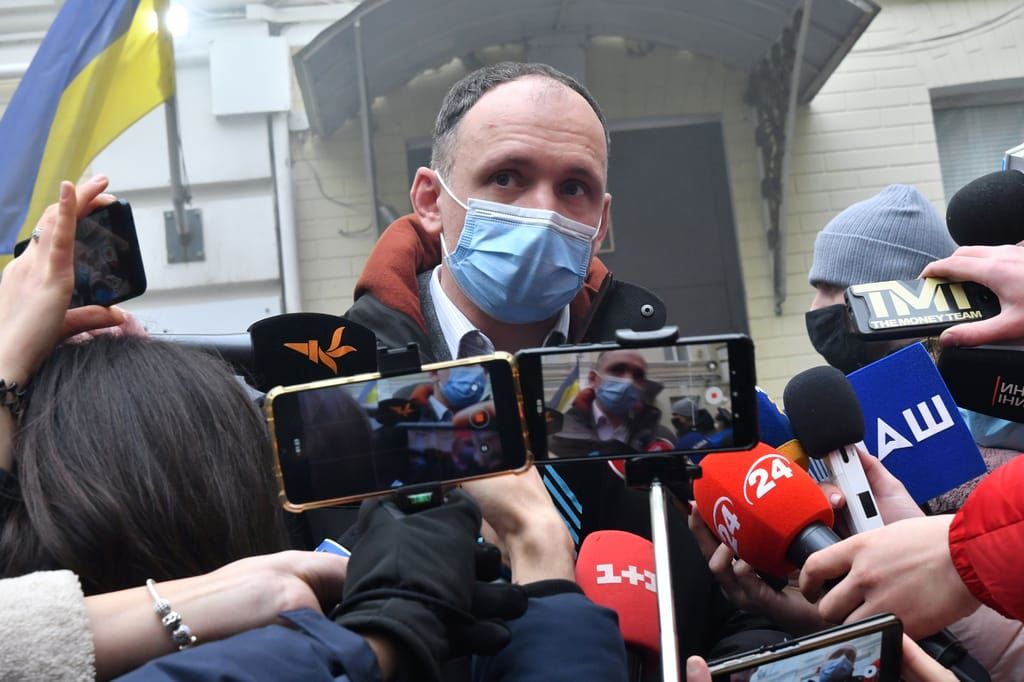 Deputy head of the Office of the President of Ukraine, who is responsible for law enforcement, Oleg Tatarov

Tatarov publicly promised to prove his innocence and said the case against him was a personal vendetta by Artem Sytnyk, then head of the NABU.

Only in July this year was Klymenko appointed as the new head of the Special Anti-Corruption Prosecutors Office after almost two years of foot-dragging and tremendous pressure from international partners. “Independent anti-corruption infrastructure is an important component of democracy in Ukraine,” Andriy Yermak, head of the president’s office, said in a statement on Klymenko’s appointment.

Since Klymenko took over, several graft investigations were unblocked, with former high officials ending up in courts, pre-trial detention centers or paying fines.

The big step back

On the same day that Ukraine liquidated the administrative court, however, it made a major misstep on reforming its all-important Constitutional Court.

On December 13, Ukraine’s parliament voted on a law to reform the Constitutional Court, but watchdogs pointed out the potential for political interference in the way judges are appointed in the new system.

The new procedure establishes an advisory group of three government officials and three independent experts with the same number of votes during the selection of judges. They would choose candidates by a simple majority vote. The decision of the group is also not final, making it possible for candidates who did not pass the evaluation to still run for Constitutional Court seats.

On December 19, the Venice Commission recommended changing the new law and introducing a seventh member to the advisory group to give the independent experts a casting vote during the selection. It also recommended making the decisions of the advisory group binding, making it impossible for candidates with negative evaluations to become Constitutional Court judges.

Only the next day, however, Zelenskyy, on his way from the frontline city of Bakhmut to Washington, signed the bill into law, ignoring the Venice Commission’s recommendation.

“Simple majority voting means that independent experts will need the votes of the political appointees from the government to select a candidate to the next stage. With these kind of rules, the advisory group won’t be able to push through independent candidates,” said Zhernakov from the Dejure Foundation.

Ukrainian civil society groups called on international partners to keep up their pressure over the Constitutional Court reform. Zhernakov argued that, because of the Russian invasion, some foreign partners were now shying away from public criticism of Kyiv in order not to play into the hands of Russia or of Ukraine’s critics in the EU.

“Due to Zelenskyy’s well-deserved popularity, international partners prefer not to criticize Ukraine as harshly as they did before as they don’t want to undermine him in any way during active warfare. But there has to be a red line,” Zhernakov said.

On December 23, the European Commission finally weighed in. Ana Pisonero, spokesperson for enlargement, said the Commission expected Ukrainian authorities to fully address the Venice Commission recommendations, and would monitor the process.

Vitaliy Shabunin, the head of the Anti-Corruption Action Center, a Kyiv-based watchdog, said in a statement that, if not changed, the new selection procedure would give effective control over the Constitutional Court to the president’s office. The president’s office did not respond to a request for comment for this story. 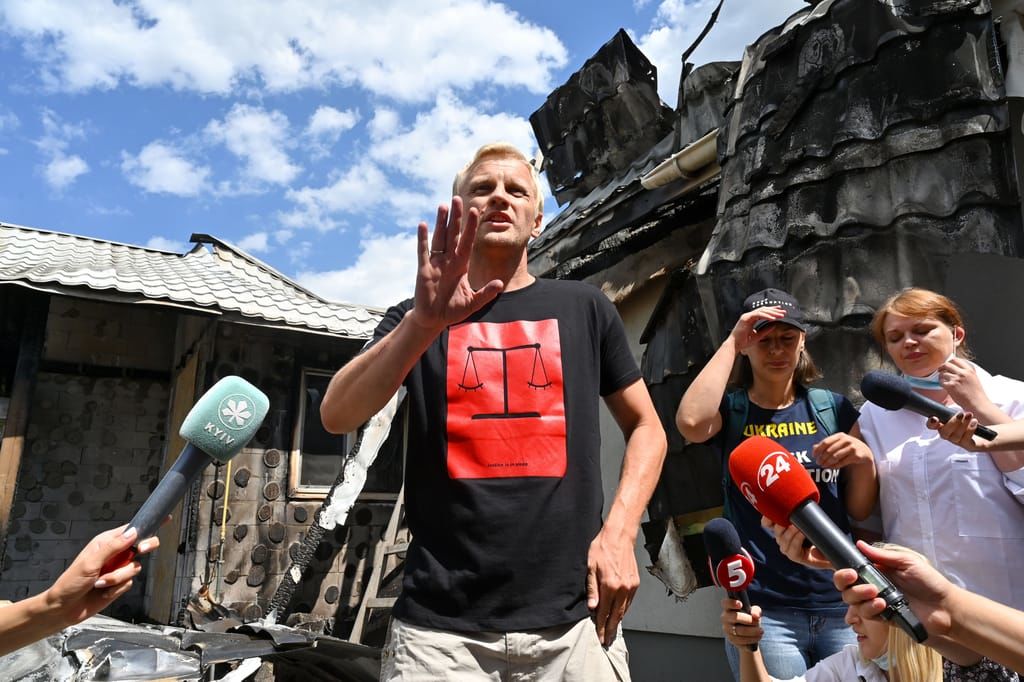 “This is a fantastic risk. The Constitutional Court is the only institution that currently limits political power in the country. And precisely because it is not controlled by the government, it can control the government,” Zhernakov said.

In a sign of the Constitutional Court’s importance, it ignited a crisis in 2020 when it recognized certain parts of Ukraine’s law as unconstitutional. That decision canceled public access to the electronic declaration of assets, as well as criminal punishment for lies in electronic declarations. Those changes practically paralyzed the fight against corruption in Ukraine, the National Agency on Corruption Prevention reported. The court’s decision was criticized by the Venice Commission and condemned by international society.

More than a thousand officials avoided responsibility for lying in declarations, and only the efforts of the authorities and the public made it possible to neutralize the threat to the anti-corruption infrastructure.

Civil society and international partners with the help of Zelenskyy managed to clean the Constitutional Court, as well as other high judicial authorities. And the ex-chairman of the court fled abroad.

When asked why Zelenskyy had now signed such a controversial law, Zhernakov said that while the Ukrainian government has been doing a lot to bring Ukraine closer to the EU, there are still people in the president’s office resisting change.

“And while Zelenskyy is in Bakhmut or in the U.S., they are slipping in things like this. Because they want to keep control over the key legislative institutions,” Zhernakov said.

Civil society is getting ready to fight back, although now the space for criticism is limited because of war. Zhernakov said the risk was that Russia would unfairly use criticism like that over the Constitutional Court to cast Ukraine as an undemocratic and corrupt country.

“Usually, Russian propaganda is baseless and can be refuted with simple fact-checking. But when instead of EU integration reforms the authorities sign the laws like the Constitutional Court one, they give not just a weapon, but a HIMARS to Russian propaganda,” Zhernakov said.